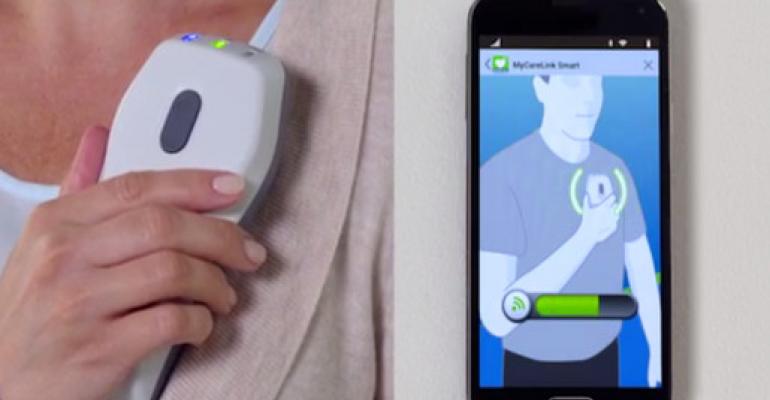 Medtronic announced Tuesday that it has created a companion app to its pacemaker system whereby patients can use their smartphone or tablet to wirelessly transmit readings to doctors.

This is the result of FDA approving the company's MyCareLink Monitor, which the Irish medtech company is billing as the "world's first app-based remote monitoring system" for patients implanted with a pacemaker. The FDA approval is another sign of convergence of medical and consumer technologies that also helps to empower patients.

The MyCareLink Smart Monitor system comprises a hand-held, physician-prescribed device reader and a companion app that works on Andriod and Apple operating systems and devices. The patients can download the relevant app and power the bluetooth connection on their smartphone or tablet to help the portable device reader to communicate with the app. When doing a transmission, a patient simply opens the app, and holds the battery powered portable reader over their implanted pacemaker to get the reading and transmit the data through the apo.

Previously, the CareLink Patient Monitor would required to be connected to a power source and landline phone in order to send device data to the Carelink Network. Others also have the option of using the MyCareLink Patient Monitor, a larger cellular monitor,  that is plugged into a power outlet and has its own integrated cellular SIM card that can automaticlly pick up a cellular signal in the area.

Now the app-enabled, portable monitor has integrated with existing mobile technologies such that patients can use either a cellular or wireless network to transmit data to physicians using their tablet or smartphone. They don't need to lug around cords and large device readers.

"Because the MyCareLink Smart Monitor is integrated into existing mobile platforms like smartphones and tablets, it is easy for patients to transmit data from their pacemakers to their doctors via the technology that they are using every day," said Dr. George Crossley, III, associate professor of medicine and electrophysiologist at Vanderbilt Heart and Vascular Institution in Nashville, Tennessee, in a news release. "This innovation will serve as the foundation for future advances using smart technology to support cardiac patients."

In addition to transmitting the pacemaker data to providers, patients confirm the date of their most recent transmission, create a personalized profile on the MyCareLink Connect Website as well as receive email or text reminders of their data transmissions.

"The MyCareLink Smart Monitor is just the first of many innovative solutions we are developing that leverage smart technology to increase patient engagement," said Darrell Johnson, vice president and general manager of the Connected Care business in the Cardiac and Vascular Group at Medtronic, in a statement.