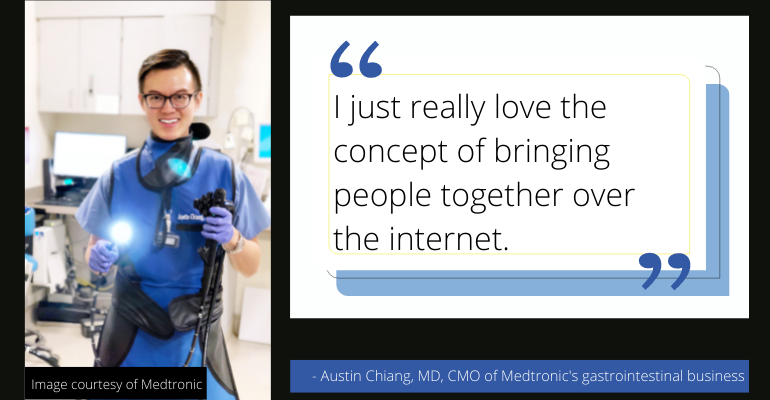 Austin Chiang, MD, is redefining what it means to be a chief medical officer in the medical device industry.

Austin Chiang, MD, has an enthusiasm for social media that dates back to the days of Myspace, and his first year of college when Facebook launched. Now he has a sizable social media presence that has followed his medical career journey, and has helped land him a job at Medtronic.

"I just really love the concept of bringing people together over the internet," Chiang told MD+DI. "But during my medical training I started noticing some patients coming into the hospital because of things they were hearing through media that weren't exactly accurate and landing themselves in the hospital rather than following through with whatever was being recommended to them by their provider."

That's when Chiang developed an interest in understanding how medical information is vetted before being released through the media.

"In that process I spent some time at ABC News and they were using Twitter to host weekly chats about different health topics," he said. "And that's when I made a conscious decision to switch my presence on Twitter from a personal one to a professional one."

Fast-forward to the TikTok era and the gastrointestinal doctor is leveraging his sizable social media presence (including 516,400 TikTok followers, 23,000 YouTube subscribers, and 18,000 Twitter followers ... but who's counting?) to share fun-but-educational gastrointestinal videos, like this one.

Chiang's videos have had an impact on patient care as he has received messages from people who learned things they didn't know before, or began getting screened for colorectal cancer and encouraged their friends and family to get screened because of information he shared online.

"Colleagues of mine have messaged me and told me that someone they saw about a procedure because of a TikTok vidoe, it's just mind-blowing," he said.

As it turns out, someone at Medtronic was paying attention.

Early in 2021, Chiang received a text message from someone he'd never spoken with before.

Now Chiang works for one of the top medical device companies in the world, as well as still practicing medicine at Jefferson Health in Philadelphia.

In addition to leveraging his social media presence to educate the general population on GI issues and emerging GI technology and procedures, Chiang uses his experience to inspire other doctors to share their medical knowledge on social media, and he serves on a social media roundtable of healthcare leaders for the White House.

"I think the administration is recognizing that their messaging could be a little better, or they could work on reaching more people, because there are a lot of good things that are being done that no one really hears about," Chiang said.

He also shares some lessons he's learned along the way when it comes to social media.

"Whenever you're trying to condense a message into a few seconds it always seems to be taken out of context, so I've learned to be very careful with my messaging," he said. "There are certain things that may not seem polarizing or insensitive, but can come across that way. When I talk about obesity and weight loss, for instance, I like to think that I'm very respectful, and that I follow guidelines set by the professional societies ... but it's still a very sensitive topic, so some people see it in a different way than I intended. ... Not only do a have a responsibility to message things well because of a larger following, but because health professionals are held to a different standard."

Other unanticipated consequences of his social media following include things like having his likeness stolen and used without his permission in advertising or to pose as him online using his photos. But none of those things have deterred Chiang from doing what he loves and talking (or dancing) about it on social media.

"Overall there is more good that can come out of it than bad if you're careful and know what to avoid," he said.

Redefining what it means to be a CMO at Medtronic

After meeting Chiang via Zoom, it's easy to see how the young, energetic physician with a vibrant personality has gained such a broad social media following. What will be really interesting to watch, however, is how he uses his role at Medtronic to really redefine what it means to be chief medical officer at a large, public medical device company. The fact that Medtronic hired him for the role also says a lot.

"When I joined Medtronic Gastrointestinal, my boss encouraged me to do two things: think outside the box, and try to redefine what it means to be a CMO," Chiang wrote in a recent LinkedIn post. "I took that recommendation to heart and dove right in."

In the eight months since he started working for Medtronic, he goes on to say, he has learned what he and his boss, Giovanni Di Napoli, have in common.

"A bold approach to pursuing disruptive ideas, a team mentality, attention to diversity, and tireless ambition…all while keeping patients front and center," he wrote. "Grateful for a leader who gives me license to try things that are weird, innovative, and fresh. I can see how this partnership makes sense."

As CMO for Medtronic's gastrointestinal business, Chiang also has a unique opportunity now to leverage his social media presence to help other health care professionals gain a better understanding of how the medical device industry works, and what goes into bringing new medical devices to market.

He also hopes to leverage his position at Medtronic along with his social media presence to help foster innovation among the next generation of physicians.

"I'm in a unique position at this stage of my career where I'm not that far out from training myself, and it's a big priority of mine to share what I'm learning with younger physicians," Chiang said. "... A lot of my colleagues have such great ideas and they just don't know where to take it."