HomeTechnologiesDigital HealthMC10 Getting Ready to Shake Up Wearables Market
Recent
Technologies
LabCorp Is Focusing on Skin Cancer with New Test
May 23, 2022
HistoSonics Finds Ally in GE Healthcare for Liver Therapy
May 23, 2022
25 Most Attractive Medtech M&A Targets in 2022
May 23, 2022
Has Medtech Shifted to a Seller's Strike?
May 20, 2022

MC10 Getting Ready to Shake Up Wearables Market 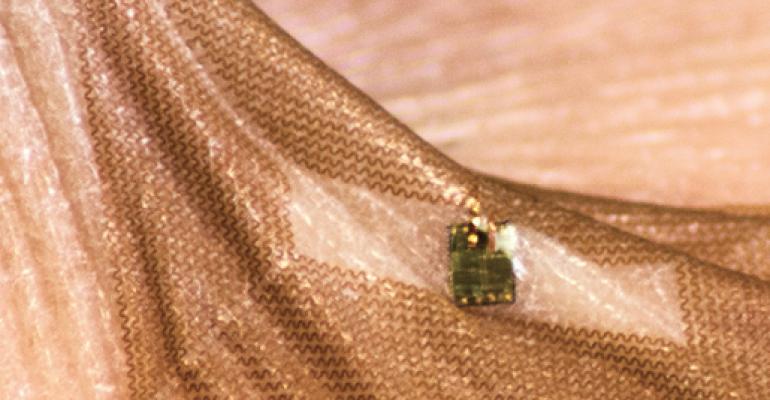 In an interview MC10&#39;s cofounder talks about how the company is gearing up for a product launch in early 2016.

Flexible electronics startup MC10 has made a pivot from sports medicine to the broader healthcare market and early 2016 is when the company will release its first product.

A fair amount of cyber ink has been spilled about the BioStamp technology developed by co-founder John Rogers whose research has sought to bridge the gap between electronics and the human body. At MC10 that research is being used to develop highly powerful, ultra-thin wearable biometric sensors. The aim is to do something that current generation of wearables cannot do: be unobtrusive, indeed almost invisible, while collecting valuable information.

The BioStamp technology miniaturizes multiple sensors into a band-aid form factor that can be worn in multiple areas on the body to measure whatever the heart desires. The hardware - indeed if it can be called so because it is meant to bend and twist along with the skin on to which it is attached like a piece of tape — also comes with companion software, ability to work with a smartphone and a cloud platform for storing and analyzing data.

"This will be the first healthcare product from MC10," confirms co-founder and vice president of technology Roozbeh Ghaffari in an interview with MD+DI. Ghaffari will be discussing advances in sensor technology as a speaker at a two-day conference in Minneapolis jointly hosted by the publisher of MD+DI and LifeScience Alley on Nov. 5.

He declines, however, to say what therapeutic area the product will address, except to say that the initial focus of the company is on movement disorders.

"There are hundreds of wearable devices out there, but clinical validation takes time and it's something that achieves a certain differentiation from the rest," Ghaffari notes.

To that end MC10 has announced partnerships with University of Rochester's Hajim School of Engineering and Applied Sciences, where it has run some clinical studies. Clinical evaluations have also taken place at Mass General Hospital as well as University of Arizona, he says.

The company also has a partnership with Belgian biopharma company UCB, and the goal there is to develop the BioStamp technology for patient-centered disease management solutions.

But there is another healthcare company that has a direct stake in MC10. Back in 2012, the Lexington, MA-based company announced a $10 million Series C round of investment that brought Medtronic on board as a new investor.

Ghaffari declines to say whether any clinical studies have been undertaken with Medtronic but acknowledges that the company has been an important part of MC10.

"They've been pretty much part of the company and still are," he says, declining to comment on the nature of the partnership except to say that the work spans a "few different areas."

Back in 2013, MC10 launched its first product, CheckLight mesh skull cap, that the startup developed in partnership with Reebok for athletes to wear in order to monitor impact to the head. But the company is now more keen on the healthcare market and the clinical setting.

By contrast, the product being launched early next year and ones further down the road will interface more closely with the skin than the company's initial product.

"These next generation of devices are skin-mounted devices kind of smart band-aid form factors," Ghaffari explains. "It's like a smart band-aid that you can place any where on the body, so it's not just isolated to the wrist. You can wear multiple ones on your body and we've tested these in clinical studies where the patient experience has been pretty good."

The device is reusable and rechargeable. It can be worn for days before it would need to be charged, he notes. Even the adhesive that helps the BioStamp device to stick to the body is replaceable.

For now, MC10 is focusing on movement disorders and some other areas, but Ghaffari declines to be more specific. For instance, up until launch, the number of sensors packed into the BioStamp device that can stick to your body is a secret.

Ghaffari hints that being able to wear multiple BioStamps on the body on various locations — the arm, the torso or the leg — may result in more accurate monitoring of different biometric information.

"If you want to try to measure gait speed, it's hard to do that from your wrist," he says. "You can measure gait, motion, balance much better from your ankles and your core than from your arm that is swinging about ...,"

Accuracy is of course paramount, especially if MC10 wants to build FDA-approved devices in the future. Yet how patients feel about using a wearable is no less crucial.

"Patient experience and compliance is a key issue ... and our technology is around building devices that are ultra-thin and the most comfortable that we can make them," he says.

The focus on experience and ease of use is not surprising. There is a fairly high rate of abandonment of wearable devices once the novelty wears off.