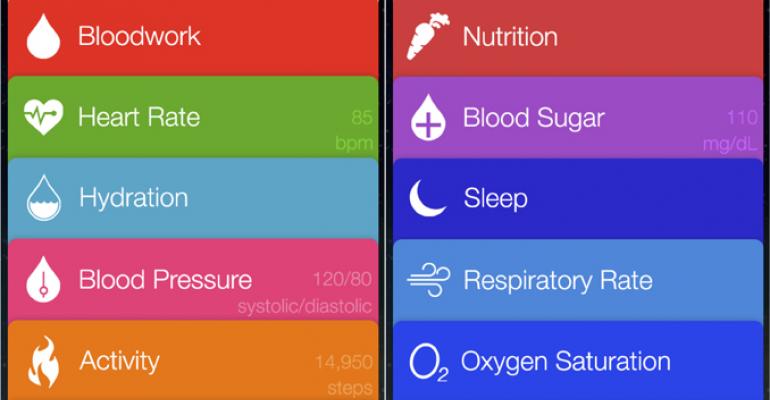 Leaked images of Apple's Healthbook app gives a glimpse of the company's plans for mHealth applications and possible devices.

There's been a lot of speculation around Apple's plans to enter the healthcare space very soon. Health tracking capabilities built into the iPhone 5's M7 chip, a number of high-profile hires, and rumors of the company developing its own “iWatch” for health monitoring have fanned flames that Apple wants a piece of the mhealth and digital health space.

Today 9to5Mac reported that it has obtained leaked images of Apple's planned app for health and fitness tracking, codenamed Healthbook. If the screenshots are to be believed, the application features a hefty number of fitness- and health-tracking options. Some are the usual suspects we've come to expect – heart rate, sleep, nutrition, and activity – that can be measured right through an iPhone itself. However other features such as the bloodwork, oxygen saturation, and blood sugar measurements seem to indicate that Apple is planning on allowing third-party health and fitness devices, like the AliveCor, to interface with the software.
Obviously, this would mean third parties wouldn't need to develop their own apps to coincide with their devices. Perhaps this is a move by Apple to consolidate device health data into one convenient platform for consumers. With the App Store saturated with anywhere from 40'000-100'000 health and fitness apps alone (depending on who you ask), it could be that the company has decided separate out the chaff and give consumers a straightforward choice.
However, anyone who's ever tried to tinker with a Mac knows Apple is not known for being the most friendly or open company when it comes to third-party development and this could just as easily be an attempt to pull everyone onto Apple devices and software. 9To5Mac's Mark Gurman speculates that perhaps the rumored iWatch or an as-yet-unseen Apple device could handle the additional tracking features shown in Healthbook.
Analysts anticipate Healthbook to be a part of Apple's iOS 8, which is expected to be released this summer around the launch of the iPhone 6.
Here's a breakdown of Healthbook's features:
Emergency Card – This looks to be the iPhone equivalent of a medical alert bracelet. Healthbook will store vital information about a user including age, weight, eye color, blood type, medications, and whether or not the person is an organ donor for access by healthcare professionals and emergency staff.
Blood Sugar and Blood Work – Perhaps the most interesting and exciting features of Healthbook could include the ability to monitor blood glucose levels as well as oxygen saturation. Again there are a number of third-party devices and apps that capture these readings, but this doesn't rule out the possibility of Apple developing its own device. 9To5Mac reports that last year Apple hired Dr. Michael O’Reilly, a specialist in pulse oximeters.
Heart Rate and Blood Pressure – There are already a variety of third-party apps and devices that interface with a smartphone that are capable of measuring heart rate and blood pressure. Healthbook could do this using the iPhone's own camera or with a rumored update to future iPhones.
Sleep Tracking – Another feature that could be captured via the iPhone. By using the phone's built-in accelerometer, Healthbook could give users insight into their sleep cycles.
Hydration and Respiratory Rate – Both of these metrics would have to come from means outside of the iPhone.
Fitness Tracking – The app features tabs for Activity (steps, calories, and miles), Weight, and Nutrition. It has bee reported that the weight function also displays BMI and fat percentage. Healthbook is also is capable of tracking these metrics over time.
-Chris Wiltz, Associate Editor, MD+DI
[email protected]
TAGS: Regulatory & Quality
0 comments
Hide comments
Related