Standard Innovation Corp.'s We-Vibe can be run off a smartphone app, including remotely. So what could go wrong? 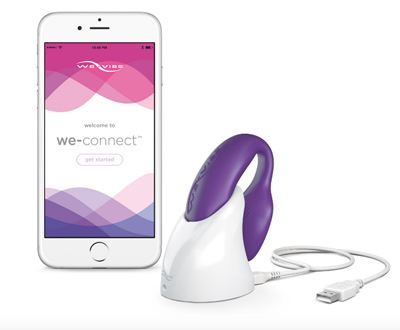 An Illinois woman has anonymously filed a class action lawsuit in federal court over a connected sex toy, claiming that its maker Standard Innovation Corp. collected her usage information without her knowledge.

The We-Vibe is fully operated through the We-Connect app downloaded over the Apple App Store or Google Play that allows smartphone control of the device, including remote control over a lover's smartphone. However, most people would have not bought the We-Vibe had they known that Standard Innovation--which is run out of Ottawa, Canada--was monitoring, collecting and transmitting their usage information to servers in Canada, according to lawyers for the woman listed as "N.P." in the lawsuit, filed September 2 in U.S. District Court in Illinois.

Standard Innovation, according to the lawsuit, concealed its actual data collection policies from its customers. Collecting such usage information without knowledge or consent is "highly offensive to a reasonable person as it reveals intimate private details about their sexual behavior that they believed were confidential," N.P.'s lawyers at Edelson say.

While certainly an attention-getting story, the lawsuit could also serve as a warning for makers of connected devices in general, including in the health and medical device field.  Fitbit, in fact, garnered some negative publicity in 2011 when its users' activity logs, made public by default at the time, included the publicly accessible sex-ercise habits of about 200 users, as Forbes related at the time.

For its part, Standard Innovation has posted an online statement promising an update of the We-Connect app that will include a new in-app communication regarding Standard Innovation's privacy and data practices, and a new feature allowing users of the We-Vibe and We-Connect to control how their data is used. The company also has external expert reviewing its data practices.

"There's been no allegation that any of our customers' data has been compromised. However, given the intimate nature of our products, the privacy and security of our customers' data is of utmost importance to our company. Accordingly, we take concerns about customer privacy and our data practices seriously," Standard Innovation said in a statement shared with Qmed. The company declined to discuss the lawsuit, saying it has not been served yet.