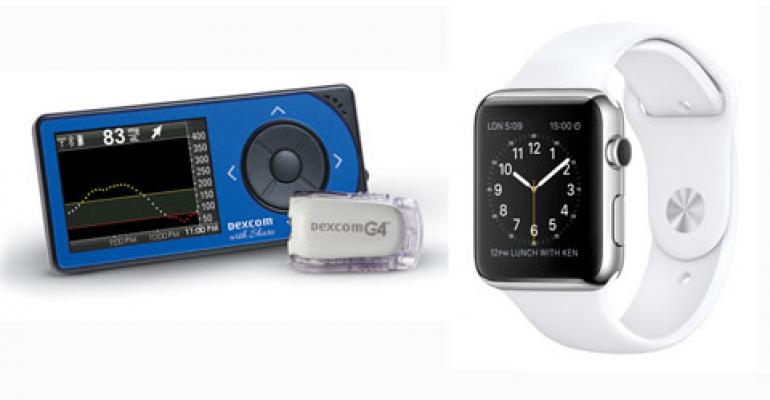 Dexcom’s Apple Watch–integrated continuous glucose monitoring system will allow diabetics to check glucose levels discreetly, but the app lacks the ability to alert users when glucose levels are too high or low.

Users of Dexcom’s G4 PLATINUM Continuous Glucose Monitoring (CGM) System have something to look forward to: the medical device company is integrating its system with the Apple Watch, with plans to expand to both Android and Microsoft in the future.

This is great news for people who want to track their blood sugar levels—or that of a child or loved one—in a way that’s both convenient and discreet.

“There was such a strong call for this that people have created it on their own, so clearly there’s a huge desire for it,” says DiabetesMine community founder Amy Tenderich.

Previously, frustrated patients (and parents of patients) created NightScout, an open-source system that uploads Dexcom’s data to Pebble smartwatches. But unlike NightScout, which has limited appeal outside of its highly technical core audience, Dexcom’s app will be much more accessible to mainstream users.

“In the development of this product, we have spent a lot of time on human practice to make something that is very usable for the majority of people,” says Dexcom chief technology officer Jorge Valdes. The company decided to hitch its wagon to Apple’s star because it anticipates that Apple Watch will be the most popular smartwatch on the market.

This integration has been in the works for quite a while, partially because Dexcom wanted to work out the foundation with FDA. The medical device company worked out an arrangement that would allow it to update the system whenever there’s a new operating system update without needing to get FDA to sign off on it again. Although medical device products typically have a much longer development cycle than consumer products, this arrangement will allow Dexcom to make sure the system is updated regularly.

Valdes notes that patients using Dexcom CGM systems look at their monitors around 50 or 60 times a day on average. Data shows that the more often patients look at their receivers, the better they do at staying in control of their glucose values, he says.

The Apple Watch app will allow users to discreetly and conveniently look at their glucose values, and people with diabetes can share data with up to five other people. Followers will get a notification when something is wrong.

But integrating the CGM system with a smartwatch has limitations. As convenient as it may be, Tenderich cautions people to remember that using this tool won’t revolutionize care.

“It’s a way to view data, but it doesn’t change diabetes management,” she adds, although patients (and parents) motivated to wear the watch and use the app will see their data more quickly, and it’s a huge convenience to have it on their wrist.

The Apple Watch can send alarms to alert users when their glucose levels are too high or low, provided they have the Dexcom CGM with them. The smartwarch app is intended as an additional display, not a primary one.

Valdes says Dexcom has plans to integrate with other apps in ways that could be quite useful. For example, the company is working with the Databetes food blog and journal to enable users to share data with Apple’s Healthkit digital health platform and populate the glucose value next to images of food people eat.

Yael Grauer is a freelance contributor to MD+DI. Read more of her work at http://yaelwrites.com.

[images courtesy of DEXCOM and APPLE]