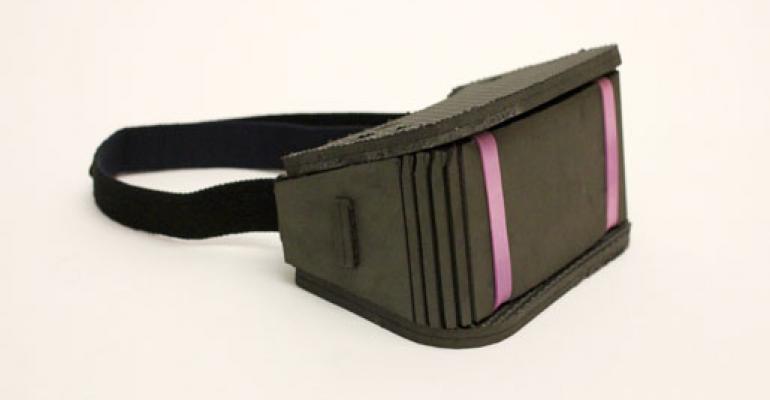 Building on the understanding that the immersive experience of virtual reality can distract from pain, designers set out to create a virtual reality headset and games tailored for burn victims undergoing grueling rounds of wound cleaning.

Building on the understanding that the immersive experience of virtual reality can distract from pain, designers set out to create a virtual reality headset and games tailored for burn victims undergoing grueling rounds of wound cleaning.

Virtual reality (VR) headsets went mainstream in 2016. While there's much discussion about the future applications of this shiny new technology, designers at Frog Design have forged ahead to turn potential into prototypes.

Unlike most of the well-known uses of VR, the Frog project is focused on more than fun. Yes, entertainment is involved, but there's more to it than a captivating game. Their VR Care headset is designed to be used by burn patients who must have their wounds cleaned regularly in an excruciating process that involves scrubbing and debridement. The idea is simple--playing a virtual reality game during the wound cleaning process to reduce pain. Executing that idea was not as straightforward, as the design team had to determine key considerations for and unique needs of the target user, and even went so far as to design VR games specifically for this application.

The project grew out of an inspired idea from Brian Pridgen, MD, a healthcare design fellow at Frog and a plastic and reconstructive surgery resident at Stanford. "[Pridgen] had an idea of using some of the cheaper versions of virtual reality to help burn patients that he works with all the time, using pain distraction as a method of reducing the amount of pain that they feel and then consequently the amount of anesthetic that they would have to take as well," explained Charles Yust, principal design technologist at Frog.

Patients are currently treated with painkillers like acetaminophen, opiates, ketamine, gabapentin, nerve blocks, and benzodiazepines during wound cleaning, yet the experience is still severely painful. Researchers have already shown the value of distraction in reducing pain. Frog's project builds on work by Hunter Hoffman, PhD and others at the University of Washington. In a 2014 paper published in Cyberpsychology, Behavior and Social Networking, Hoffman et al found that a burn patient using Oculus Rift Virtual Reality goggles during occupational therapy experienced a reduction in pain. The authors wrote, "Availability of inexpensive but highly immersive VR goggles would significantly improve cost effectiveness and increase dissemination of VR pain distraction . . ."

When the designers started working on a design concept, they realized that creating for this target population called for a specific set of requirements. Infection control, for one, is very important since these burn patients are already vulnerable in the hospital setting. That mean the device needed to be easy to clean or even better, disposable. The headset would also need to be resistant to moisture and water, since patients might get wet during the wound cleaning process. Google Cardboard, one available VR headset option, can't stand up to this moisture, Yust pointed out.

In addition, the headset had to be inexpensive, comfortable to wear, and easy to put together and use, too. Nurses should be able to assemble the headset and set up the game quickly on any smartphone. "We wanted to build a solution that could potentially be $10 or less," Yust said.

"If we can get this to be cheap enough, we can make it a non-issue for hospitals to adopt. It doesn't have to incur a significant cost or bring insurance into the equation, which causes complexity," Haskin added.

Finally, the designers wanted the VR solution to take patients away from the painful and often harrowing situation they're facing. Haskin said the Frog team asked themselves, "What can we do to actually make this delightful?"

Keeping all of these factors in mind, the team started using play mat foam to prototype. This familiar material is soft, comfortable, robust, moisture-repellent, and would protect a smartphone, Yust noted. What's more, the foam is inexpensive and easy to put together.

After field testing the headset with frog staffers and nurses, the team made tweaks to the design, including adapting it to smaller head sizes. The foam has stayed. "Our most recent prototype is still using the same type of foam material that we used early on," Haskin said.

With the basics of the physical device out of the way, the designers turned their attentions to the VR game. Since most patients are lying on their backs during wound cleaning, many VR games, which encourage players to look around their environment while sitting or standing, didn't work well for users who were mainly looking straight up. Haskin, a self-described gamer, said, "I was actually pretty appalled by how few . . . games could actually work for this scenario."

The team did find three existing games that would work, but this scarcity motivated the team to create its own games and software solution. The ideal game would be easy for a clinician to start for the patient, would be simple to calibrate for the patient's specific head angle, and would be played using only limited head movement like a nod. Because burn victims span all age groups, the game had to be friendly but challenging for all types of players.

"When we think about coming up with a solution to address these patients, we need to think across all age groups, all demographics . .  that works for as many people as possible," Haskin said.

Frog's game, cleverly titled Epione for the goddess of pain soothing pain, can be played with left-right head movement as well as a smaller amount of up-down motion. Set in space, it allows for two modes of play--a slower-paced, experiential game and a faster, action-packed version where users strive to rack up points or set a distance record.

Players can enter either mode or restart the game using head movements. That's especially important for its purpose in the clinical setting, because maintaining the distraction without requiring another operator is key. "A lot of VR games . . . if you lose, you have to take off the headset, go and interact with the menu. That immediately takes you out of the immersive experience," Haskin explained. "That's not great for a patient. It's not great for the nurses to have to take off. So how can you provide the patients with a level of control, to potentially switch between game types, and not take them out of the immersive experience?"

The game was tested with Frog staffers, as well as with users of varying ages, including high school students. The user feedback was incorporated back into the game design, Yust said.

A VR Care headset prototype is being studied in a pilot study, Pridgen told MD+DI via e-mail. That pilot study is being conducted at one burn center to determine how this low-cost VR solution impacts pain perception during wound treatment. The study incorporates the three commercial games, Pridgen explained. "After completing this study, I plan to use the VR Care game and headsets for a larger study with burn patients," he wrote.

Frog is making this an open source project, allowing anyone to access the code for the Frog-designed game and to download the headset protoype plans. As the VR Care headset and software undergo further study, the design team is hoping to find a healthcare partner that will further its development. VR for healthcare could have future healthcare applications in physcial therapy, chronic pain, and phobias, they noted.

"We want to start a conversation about how virtual reality can be used in other ways than just entertainment," Haskin said.