Can Medtech Learn to Coexist with the Big Bad Apple? 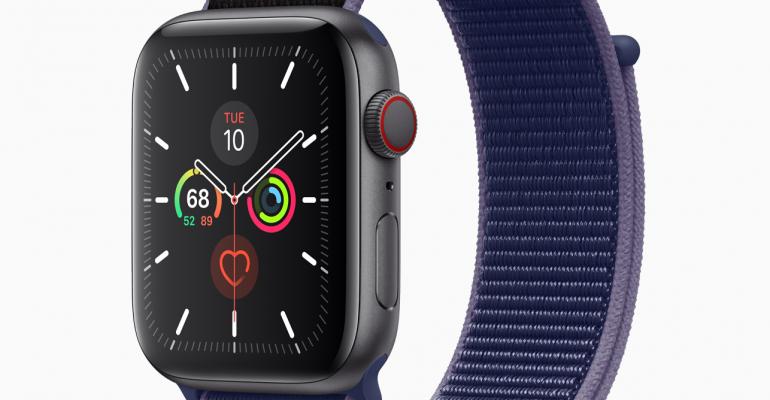 Apple unveiled its Apple Watch Series 5 in September. Like the previous version of the device, the smartwatch checks the consumer's heart rhythm in the background and sends a notification if an irregular heart rhythm appears to be suggestive of atrial fibrillation.
Apple's entrenchment in the healthcare industry (along with other major consumer tech companies) has a lot of people in the traditional medical device industry spooked.

The invasion of consumer tech giants like Apple in healthcare was one of the hottest conversation topics at MD&M Minneapolis 2019 and opinions were widely split over what this encroachment ultimately means for traditional medical device companies and the healthcare industry in general.

Let's rewind for a moment to 2018 when Apple dropped a bombshell on the industry with news of FDA clearance to include an electrocardiogram (ECG) sensor in its Apple Watch. Industry critics were quick to point out that the ECG clearance was only marginally different from what AliveCor had already been doing for years.

In 2017 FDA cleared AliveCor's KardiaBand ECG accessory. The Mountain View, CA-based company’s technology is compatible with the Apple watch. The KardiaBand is a clinical-grade wearable ECG that replaces the Apple Watch band. The company said the accessory provides accurate and instant analysis for detecting AFib and normal sinus rhythm in an ECG. The company has also developed Kardiamobile, which is compatible with Android devices.

"Anybody here who thinks Apple, Google, Amazon, Microsoft are not going to be in healthcare," Dave Albert, MD, founder and CMO at Alivecor, said during a fireside chat at MD&M Minneapolis with Omron Healthcare CEO Ranndy Kellogg and MD+DI Editor-in-Chief Daphne Allen. "Apple's after-tax profit is twice as much as Medtronic's revenue and Medtronic is the biggest [pure play] company in the medical device business. So the scale of those businesses ... they have unlimited resources."

In addition to Apple's irregular heart rhythm notifications, Albert cited several other examples of consumer tech giants moving into the healthcare space. Amazon just recently bought Health Navigator, a startup known for providing online symptom checking and triage tools to companies that are looking to route patients to the right place. The company has reportedly said it will offer Health Navigator to employees as part of its Amazon Care clinics. Previously Amazon paid $753 million to acquire PillPack with the intention of getting into the online pharmacy market. Last year the online retail king also teamed up with Arcadia, a consultancy group, to launch an exclusive brand of consumer-use medical devices for diabetes and hypertension management. Dubbed, the Choice Brand, Amazon’s medical device offerings will start with a range of blood glucose monitors and blood pressure monitors both with supporting mobile apps that offer measurement tracking, data mobility, and reminders.

Kellogg emphasized the importance of learning how to navigate the medical device regulatory system and he pointed out that companies like Apple, Amazon, and Google have been hiring directly from the medical device industry because they want that expertise to help them navigate the regulatory system. In Apple's case, the company also has been actively hiring medical doctors to support its healthcare efforts.

In addition to participating in the fireside chat, Kellogg delivered a keynote speech at the two-day Minneapolis event, during which he talked about the powerful combination of medtech breakthroughs, consumer education, and behavior change that is helping people become more proactive about their health and reduce their risk of cardiac events. He also showcased Omron's HeartGuide, the first FDA-cleared wearable oscillometric blood pressure monitor.

"It's amazing new technology, they can do everything that a Fitbit does in some of these Apple Watches, but now also monitor your heart rate and any irregularity in your heart rate," Len Czuba, president of Czuba Enterprises, a Chicago, IL-based medical device consultancy, said during a session discussing the challenge of balancing product design with functionality.

"I still don't know why I wear this thing and yet I now wear the fifth generation of it because I can't seem to leave the house without it," Saunders said during a panel discussion about whether or not silicon valley will eclipse Minneapolis as the biggest U.S. medtech hub.

Saunders also talked about the magnitude of the 400,00-participant Apple Heart Study at Stanford that "provided real-time heart rate data for the first time ever."

"From sun up to sun down, every single heartbeat was recorded by Apple Watch and fed into a massive study that went into a machine learning algorithm that was able to then weed out people who were potentially having heart events," Saunders said. "Now, it turned out that there were quite a few misses in that initial pass and the media jumped all over that, but that wasn’t the point. Because if you’re going to teach, say, Google Images, how to recognize a cat, you have to have “not a cat.” You have to teach Google Images ‘that’s not a cat, that’s not a cat, that’s not a cat…' So this 400,000-person dataset showing the machine learning algorithm that ‘hey here’s something that we thought was a heart event but really wasn’t’, that just makes the machine learning better for the future, and then there are lives that … their physicians are telling them ‘had you not gotten this alert from your physician you probably would not be alive.' That’s amazing technology."

But not everyone at the Minneapolis event is in favor of empowering consumers with wearable heart-monitoring tech.

"As somebody who worked at Medtronic as long as I did, I'm not a fan of that device," said Steve Goedeke, president and CEO of New Brighton, MN-based Cardionomic. “I think it’s very misleading and counterproductive to give people insight into their arrhythmias with a device that has very poor specificity and accuracy. Just because you can do something doesn’t mean you should, and I think in healthcare we have to be very careful about what we do."

Goedeke said he is concerned about the number of false alarms from the Apple Watch ECG app that have prompted people to seek medical attention when it wasn't necessary.

"The one that's most disturbing to me is the misuse in children, parents monitoring their kids and running them off to the doctor because they have a high heart rate," he said. "I'm very troubled by that whole approach. I think this is an example of things that have gone off the rails where we need to have more rigor about the intended use and social good and not be focused on the shiny object that you can sell watches with. I'm probably the only one in the room who feels that way about that but I’m deeply disturbed by what Apple did.”