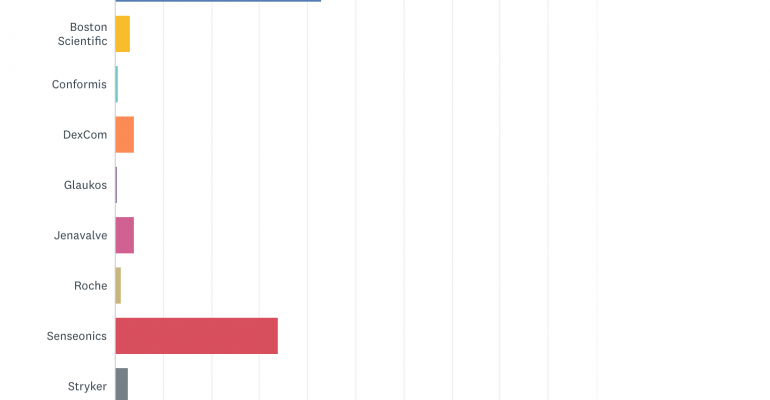 Beta Bionics was selected by readers as Company of the Year followed by Senseonics Holdings.

The people have spoken. Beta Bionics has been named medtech company of the year. Nearly 44% of MD+DI readers participating in a special poll voted for the Boston, MA-based company, which is developing an artificial intelligence-powered bionic pancreas, called the iLet, to help manage type 1 diabetes. Beta Bionics pulled ahead of other competitors like Boston Scientific, which was MD+DI Editor’s Choice for medtech company of the year.

Each year, MD+DI's editors take a long, hard look at the medical device and diagnostics companies that rose above the ranks over the past 12 months. It can be savvy business strategies, breakthrough products, or operational execution that set the best of the best apart.

Beta Bionics has been making significant strides in the diabetes management landscape by scoring an IDE and a plush partnership with Senseonics Holdings.

“This is really is a cherry on top of a wonderful cake that we’ve had which is 2018,” Edward Raskin, vice president of business development and a board member at Beta Bionics, told MD+DI. “This is the year we’ve been recognized by the industry along with the community and have been in clinical trials doing our working studies as we lead into our pivotal trials in 2019. This is just an incredible feeling to march through so many achievements.”

Beta Bionics’s iLet consists of a dual-chamber, autonomous, infusion pump that mimics a biological pancreas. The body-worn device contains a little cartridge with insulin in it. The device is connected to the body through a tube with insulin. There is also a two-hormone version of the technology, so it can be configured to use insulin or glucagon.

Embedded in the system are clinically tested mathematical dosing algorithms driven by machine learning to autonomously calculate and dose insulin and/or glucagon as needed, based on data from a continuous glucose monitor. Once initialized, the iLet engages its machine-learning, AI to autonomously control the individual’s blood-glucose levels, and to continuously adapt to the individual’s ever-changing insulin needs.

“We’ve built a device that learns in real-time continuously,” Ed Damiano, CEO and founder of Beta Bionics, told MD+DI. “iLet adapts to your ever-changing insulin needs and adjusts them for you automatically – kind of how a self-driving car can get you from a to b without you participating in that process.”

The company has a “lean” team that operates on two coasts to accomplish its goals. With under 30 people on staff, Beta Bionics has its core manufacturing operations, along with business development and legal action in Irvine, CA. In Boston, the company’s operations include but are not limited to clinical and regulatory.

But despite the potential comparisons and thoughts on competition, Beta Bionics said that just won’t be the case, especially since many of the firm’s team have family members or are impacted by type 1 Diabetes. In fact, the company said it is focused on developing an ecosystem of treatment or patients.

“We come from the type 1 diabetes community,” Raskin said. “I have a kid with type 1 and (Damiano) is in the same boat, and many people in the company have type 1 themselves. We’re strong believers that advances in technology in this space sort of floats our boats. So, when Medtronic succeeds; when we succeed; when BigFoot succeeds; it helps everyone in the community in one way or the other.”

Part of the appeal of Beta Bionics comes from its community-like feel. In 2016, the company did a regulation crowdfunding and raised $1 million - the maximum amount allowable. Many of the people that supported the crowdfunding effort had been impacted by diabetes.

Even in MD+DI’s reader’s poll, normal everyday people, outside of the industry chimed in and supported the bionic pancreas developer.

“I am a school nurse,” an anonymous voter wrote. “Monitoring kiddos with diabetes is challenging at school. This device could be life changing for them! Thank you!”

Another anonymous voter wrote, “I am a person with and mother of a 12-year-old battling type 1 diabetes who is closely following the advancements coming from Beta Bionics and believe them to be capable of bringing life-changing technologies to the market for millions with type 1.”

“Ed Damiano is a true inspiration and has taken his own family experience with type 1 diabetes, and turned it into hope for many, many sufferers,” one voter wrote. “His ingenious innovation is only usurped by his generosity, in creating Beta Bionics in a way that will serve patients around the world above profit.”

With a successful 2018 under their belt, company executives are now looking forward to an eventful 2019.

“I think the probably one of the most exciting things you’ll see in the early part of 2019 are the top line results from our summer study that we completed using our clinical version of iLet,” Raskin said. “This will be a major milestone. The most exciting part of 2019 will be the submission of our IDE for a pivotal trial and the actual first steps in launching that trial.”

“While all of this clinical work is going to be going on with our pre-commercial units that [Raskin] referenced will be going on in the first half of 2019 and into the middle … we’ll be building out the final commercial platform and doing the final benchtop testing of it for preparation of submitting the application to FDA for a final registration trial of the device,” Damiano told MD+DI. “We’re also at the same time going to be building out the manufacturing capability in Irvine. Despite all this product development we’re doing in 2019 we’re still doing [leading] edge research with the device."