Are Nike's Fuelband Layoffs the Beginning of the End for Wearables? 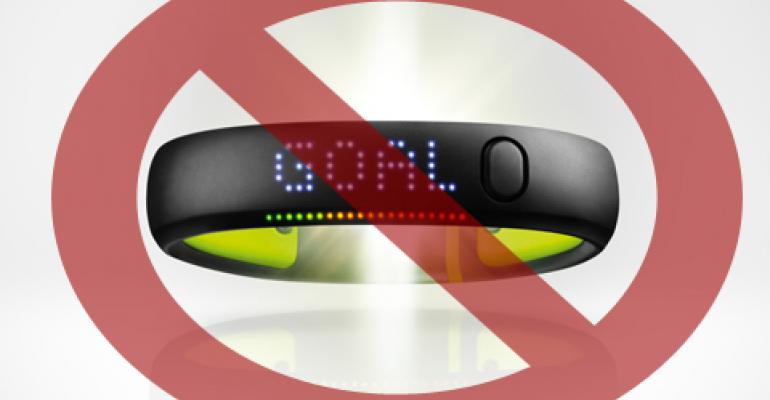 Nike has made big layoffs around its Fuelband. Is it a sign of things to come for wearables?

Conflicting reports have emerged following a CNET report that Nike has laid off a number of its engineering team associated with the Fuelband.

When news initially broke, rumors stated that the company would be exiting the wearables market and shuttering its Fuelband product. It also sparked speculation in publications like Wired that this move was due to Nike's buddy-buddy relationship with Apple and that the sports brand was politely stepping aside to make room for Apple's iWatch – which as of now still remains the mythical unicorn of wearable technology.
A representative from Nike was not available for comment. However the Web site Re/code obtained an official statement from Nike that confirmed the layoffs, but denied any plans to end production of the Fuelband. “We will continue to improve the Nike+ FuelBand App, launch new Metaluxe colors, and we will sell and support the Nike+ FuelBand SE for the foreseeable future,” the company said.
News of the shakeup first came on the radar earlier this month when a post on the anonymous messaging site Secret.ly warned of upcoming layoffs. The post blames the layoffs on execs who “committed gross negligence, wasted tons of money, and didn't know what they were doing.”
Regardless of Nike's future plans, developments like these should only reinforce how unstable and unpredictable the wearables market still is. On one hand reports are projecting the wearables market to skyrocket to $19 billion this year. And last month Intel dropped a cool $100 million to acquire Basis Science, makers of the Basis smartwatch.
However, couple this with widespread criticism against the need for and efficacy of wearables along with studies showing that one in three American consumers stop using their wearable device after six months and it becomes clear that there are challenges to overcome. If wearables are going to survive it's going to be a question of functionality.
“It's the Wild West in terms of wearables and how you define it and what they are,” says Stuart Karten, principal of Karten Design, a firm that works in the medical field. He stresses what many in the industry have said regarding wearables, that they need to provide meaningful outcomes. That means going beyond the step counting that has become so ubiquitous and tackling real medical conditions head-on. “We believe providing real functionality means helping to inspire and empower positive behavior change, whether it's for cardiac health, weight loss, better nutrition habits, etc. with the result of real, improved outcomes.”
It also means running into FDA and other regulatory bodies. Right now there's a glut of consumer wearables, all with pretty much the same functionality – all that didn't require regulatory approval. But these products can only do so much. ”The real change will be when you see the regulatory world lighten up a bit and let some things with meaningful outcome come through,” Karten says.
There's also a chance that wearables could get pushed off of the market as more traditional medical devices adopt new functionalities. Karten cites the ICD for example. “The [ICD] is like a FitBit on steroids and you can't even get the data off of it.” But what if you could? There are devices all around us that could provide meaningful realtime data for consumer and patient outcomes. “Hearing aids are the most sophisticated external wearable that you can put on your body,” Karten says. “What can we do with them besides provide hearing?” He talks about a hearing aid that connects to a smartphone via Bluetooth that can be adjusted to drown out or modify noise around the wearer.
Despite real or imagined consumer demand, wearables might ultimately be looked back on as a fad. As technologies get smaller and less intrusive, consumers might not have long tolerance for a smartwatch. “The future of wearable is invisible, Karten says. “The products we will come to know, love, and use daily are those that blend seamlessly with our existing behaviors, habits, and ceremonies.”
Right now companies are treating wearables like fashion items instead of tools. It's something they should start to rethink if they don't want to see themselves following in Nike's athletic-shoed footprints.
-Chris Wiltz, Associate Editor, MD+DI
[email protected]
TAGS: Regulatory & Quality
0 comments
Hide comments
Related