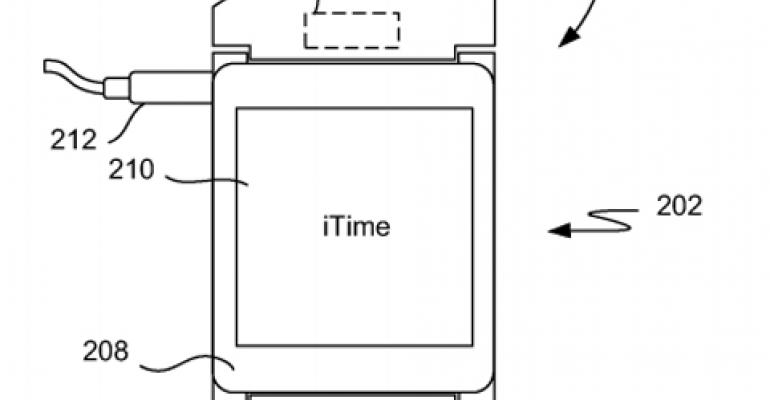 Apple has been granted a patent for a wearable device that shows some of the company's ambitions for the iWatch.

Let's face it, Google, Samsung, and whoever else can release as many as they want, but consumers' heads won't really turn until they hear one name attached to a smartwatch – Apple.

As first reported by Web site AppleInsider, Apple was granted a patent today for a wrist-worn electronic device that looks to be the basis of the highly-anticipated “iWatch.” The patent documents, filed in 2011, detail a wearable device that looks comparable to a wrist-worn version of the iPod and features a touchscreen interface, audio and video capabilities, as well as alerts for phone calls, text messages, and social media updates. The documents also suggest a device capable of integrating GPS, a heart rate monitor, accelerometer, and haptic feedback as well as the ability to remotely control other devices such as music players and recognize hand gestures and movements. Wearers could wave their hands to reject a phone call, for example.
Given the patent filing is over three years old, it's not surprising to see the iWatch patent proposing some of the same functionalities seen in already-released products like Samsung's Galaxy Gear.
The patent documents also say the device can be integrated into a “personal wireless environment” and communicate with other devices including a wearer's personal computer and mobile phone, a plan which falls readily in line with new products and services Apple has already revealed this year. At its annual developer's conference Apple unveiled its own mobile health app – Health – and HealthKit, its foray into digital health that Apple says will become a hub for all of your mHealth data and allow data to be shared across different applications and devices. The company already has some major names in healthcare onboard with HealthKit, including the Mayo Clinic. Providing digital health services in a wrist-worn form factor, one that is more convenient and unobtrusive than any smartphone, seems only like a logical step.
Apple hasn't released any details regarding the actual functionality of its iWatch. The official product announcement should confirm just how serious the company's commitment to digital health is in this regard. Earlier this month, Qmed reported that Apple has hired several employees from medical sensor company C8 MediSensors and has “ spent a lot of time working on the technology for gathering data through skin...”
Given Apple's tradition of keeping its systems and software relatively closed off (ever tried changing the battery on your iPod or iPhone?) it is doubtful the iWatch will employ the sort of open, modular functionality that Samsung is currently developing for its upcoming Simband. However, Apple has been noted to encourage app development and has even gone as far as creating a new programming language - Swift- to lower the barrier to entry for aspiring developers. Depending on the final functionalities of the iWatch, users could see third party developers creating plethora of health and fitness apps for the device, just as they have done with the iPhone.
Apple is reported to have begun mass production of the iWatch this month with an eye on an official release in time for the 2014 holiday season or early 2015.
[images via USPTO]
-Chris Wiltz, Associate Editor, MD+DI
[email protected]
TAGS: News
0 comments
Hide comments
Related