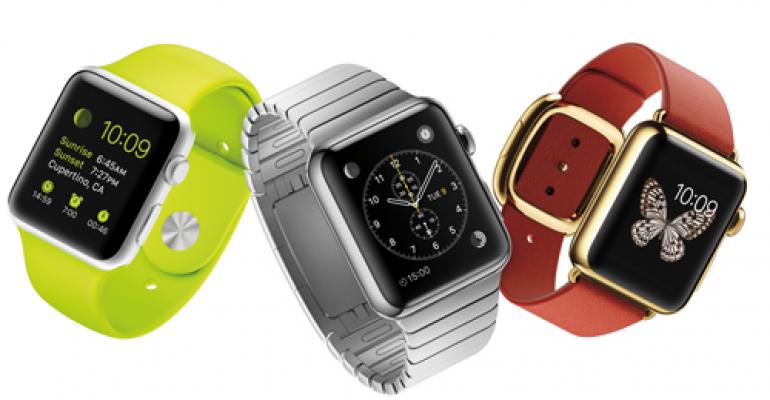 The wearables market got a big boost Tuesday with tech giant Apple entering into the fray.

After wowing an adoring audience with the introduction of larger iPhones - the iPhone 6 and the iPhone 6 Plus, and a new payment system, Apple Pay, the tech company's CEO Tim Cook said he wanted to show "one more thing."

With that, Cook unveiled one of the most anticipated products in recent memory - the wearable Apple Watch (and no, it's not called iWatch) - according to a live stream of the event.

The wearable device, which comes in three styles - the Apple Watch, Apple Watch Sport and Apple Watch Edition, requires the use of iPhone 5 and later generations, and will be available in 2015. They are also available in two different sizes. And it will cost you a minimum of $349.

"Using its gyroscope and accelerometer and the GPS and Wifi from your iPhone, the Watch provides a comprehensive picture of your daily activity," said Jonathan Ive, Apple's senior vice president of design, in a prepared video shown to the audience. "This allows it to establish and suggest goals and reward fitness milestones."

The device can track heart rate and can even allow users to send the actual heart rate in a text message to a friend using the Watch, where a new feature enables the receiver to hear and feel the heart rate through what Apple calls the Taptic Engine.

With the Activity App, users can see how much time they spend moving, standing and exercising, although this exercise is not an intense workout, rather some brisk activity done throughout the day, explained Jay Blahnik, reportedly a consultant with Nike FuelBand and now an Apple employee, in a prepared video.

The "move" ring captures how many calories have been burned throughout the day and the ring can be closed when the user hits a goal set for the day, Blahnik said. The same thing for the "exercise" ring, which closes when the Watch determines the user has accomplished 30 min of brisk walking or more intense activity although it doesn't have to be all done at the same time. The "stand" ring shows how often a wearer got up from a sitting posture.

"This may seem like a small thing, but sitting less can go a long ways towards improving your health," Blahnik said in the video. "A complete ring means that you stood for at least one minute for 12 different hours during the day."

Both these apps work in conjunction with the Fitness App on the iPhone that stores the data and allows users to share it with the Health App, which can access the data for use with other third party health and fitness apps. in June Apple launched the HealthKit, Apple's digital platform to integrate all mhealth apps for users.

"We could not be more excited to bring these health and fitness features to the Apple Watch," Cook told the audience. "The list of features is a mile long and I am certain that when developers get their hands on the developer kit that list will get even longer and there will be things that we couldn't even imagine."

Given the success of third party general apps on the iPhone, that statement is probably true for health and fitness app developers as it is for others.

Apple Gains a Victory in Patent War With AliveCor
Dec 07, 2022