The high-tech giant has acquired a startup that lets consumers put all their medical information in one place--but another sign of Apple's growing interest in medical technology. 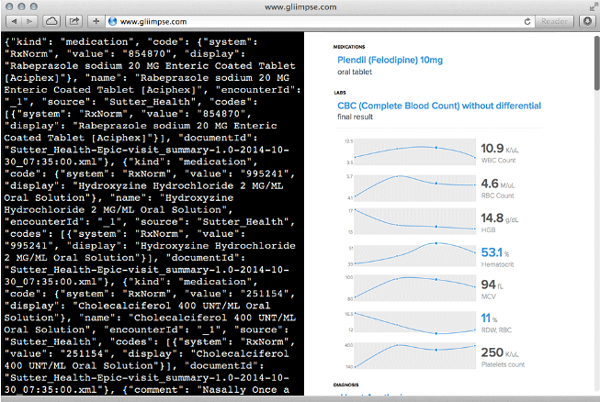 Apple has acquired a health record startup that allows consumers to gather, organize, and manage their own health information.

Three-year-old Gliimpse (Redwood City, CA) helps consumers securely collect their lifelong medical data and that of family members from web portals, organize and share it. Apple bought the company for an undisclosed amount earlier this year, according to a report in Fast Company.

Founded by a team led by serial medtech entrepreneur Anil Sethi, Gliimpse aggregates and standardizes personal health information and is aimed at people with chronic health conditions like cancer and diabetes, the site reports. Like many other companies, Gliimpse was born of personal need. On his LinkedIn page, Sethi writes that he is helping a sister manage a Stage IV breast cancer diagnosis through data.

"As a consumer of healthcare, I leave behind a bread-crumb-trail of medical info wherever I've been seen," he writes. "But, I'm unable to easily access or share my own data. Obamacare is one of several forcing functions federally mandating physicians and hospitals give us our data: meds, labs, allergies ... you get the idea. However, there's no single Electronic Health Record that all physicians use, sigh. Worse, there isn't even a common file format across a 1000+ systems."

Apple CEO Tim Cook hinted in an earlier Fast Company report that the company has designs on doing something disruptive in the healthcare market. Its Apple Watch, with fitness features, hasn't taken off as expected.

Apple launched CareKit earlier this year, adding to its other healthcare offerings, HealthKit and ResearchKit. CareKit is an open source framework that includes four modules that app developers can take advantage of for iOS. There's Care Card for medication and prescribed activity tracking, Symptom and Measurement Tracker that takes advantage of the iPhone's accelerometer and gyroscope, Insight Dashboard to compare symptoms with Care Card activities, and Connect to share information and communicate with health providers or friends and family.

The CareKit comes on top of the previously launched ResearchKit that enables medical researchers to tap much wider study samples using smart devices. The Gliimpse platform is also designed to allow others to build consumer and analytic apps through Oauth and APIs.

The company is working on a 911 feature that will authorize EMTs and ER staff to have emergency access to a patient's data. Another future feature: Donate Your Data, to give it to researchers seeking cures for medical conditions.