The implied answer appeared to be "yes," and a big part of that rethinking could be enabled by mobile technology, which will allow clinicians to have a continuous relationship with patients. The goal will be to treat patients efficiently and reduce waste.

Technology will play an integral role in this transformation, Chow says, who believes that telehealth is poised to find widespread use.

To support that assertion, Chow points to the Gartner Hype Cycle, in which a new technology is initially overhyped, and then undervalued before gradually becoming adopted broadly. "Telehealth is in the trough of disillusionment," Chow notes, which follows a stage known as the "peak of inflated expectations." The fact that telehealth is no longer being overhyped is good, Chow argues, "because people can now understand what is good and bad about it."

Telehealth technologies poised to find increasing adoption include live video consultation between doctors and patients--and store and forward technology, in which a patient sends either photos or videos to a physician for future diagnosis.

In one study, dermatologists were able to see patients in an average of 7 minutes--a significant savings over the 20 minutes it took to see a patient in person. The other two promising technologies include remote monitoring, which requires patients to keep track of health metrics that are beamed to clinicians, and guided self-service, which supervises patients who have opted to take their healthcare into their own hands.

While there are hurdles to making mobile monitoring technology mainstream, the technology is gaining steam in healthcare.

The patient kiosk, which TechCrunch terms "a hospital in a box," puts patients in touch with doctors via video conferencing. With emergency rooms being overused, such kiosks could be used to treat a wide variety of patients--ultimately from locations such as pharmacies. Chow points out that the stations need to be sterile and have an attendant manning them.

There are more than 28,000 medical apps, Yan Chow says. Of these, only a small percentage are FDA-regulated apps designed for use by medical professionals. The number of such professional apps, however, is steadily growing. Examples include AirStrip Cardiology's technology for monitoring heart health, Mobisante's smartphone-based ultrasound system, AliveCor's heart monitor, and Philips Vital Signs Camera, which uses the iPad or iPhone's camera for contactless measurement of a patient's heart rate and breathing rate.

The technology behind patient monitors has advanced greatly since the LifeCall pendant achieved pop culture fame in a 1980s commercial with the line: "I've fallen... and I can't get up!"

Miniaturization of electronics has enabled monitoring technology to embedded into everything from infant's clothes to shoe inserts to smart teddy bears. Shown below is Teddy the Guardian, which comes bundled with sensors to monitor a child's heart rate, oxygen saturation, and body temperature. "A sensing teddy bear is a little bit creepy but kind of cool," Chow quipped. 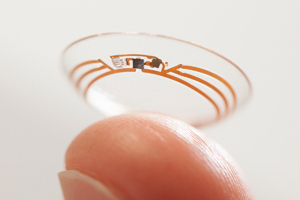 A number of innovative sensing-based technologies have either hit the market or have been announced. examples. Examples include Google's glucose-monitoring contact lens, which is shown on the right. "I don't know when if every the Google contact lens will ever see the light of day, but it could be very attractive to diabetics, who might not have to poke their skin any more," Chow said.

Other examples of specialized sensors include the CheckLight trauma detecting cap from Reebok, a skin-ulcer detecting shoe insert from Orpyx, and the Lechal haptic shoe for the visually impaired.

In addition, a wave of ingestible sensors are also hitting the market. Among them is the Proteus Digital Health microchip pill and the e-Celsius thermometer pill.

Other interesting sensor-based technologies include the Xhale's SMART adherence system that tracks patients drug adherence by monitoring their exhaled breath (product not yet available on the U.S. market) and the MagneTrace necklace that tracks tagged pills as they are swallowed. 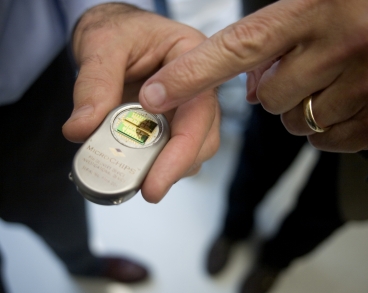 A wirelessly-controlled implantable medical device developed at MIT and by a firm known as MicroCHIPS Inc. enables a drug to be delivered to a patient, potentially doing away with the need to take a tablet or an injection. "Maybe one day we won't have to take pills anymore--you could have an implantable, programmable shunt that dispenses medications," Chow said. According to MIT professor Robert Langer, the breakthrough could "usher in a new era of telemedicine."

The device was studied in a Danish clinical trial involving women with osteoporosis. Women implanted with the device were freed from having to worry about a regimen of daily injections.

Other recent breakthroughs in the realm of implantable sensors include nanotech-based implants that can monitor the body and even potentially detect heart attacks before they happen.

A number of novel mobile instruments are hitting the market that either operate smartphone-like features or that integrate directly with smartphones. Shown here is the Ekoskope stethoscope, which offers a mobile device-inspired display along with the ability to measure patients' ECG.

Other examples indicative of this trend include the AgaMatrix IBGStar iPhone glucometer, the clip-on oscilloscope from Cellscope and the Tinké smartphone plugin that measures heart rate, respiratory rate, oximetry, and heart rate variability. 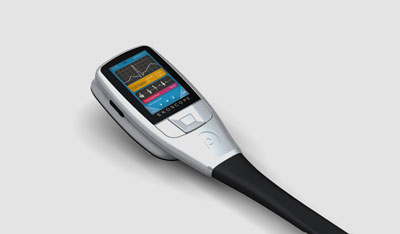 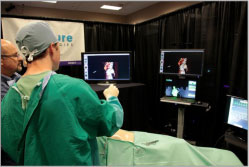 It is obvious that consumer mobile devices are having a huge influence on the medical sector. Other consumer technologies, however, are also having a significant influence. Examples include the Microsoft Kinect, which could be used in the operating room to enable surgeons to control equipment without having to touch it with bloody gloves.

True, robots have been hyped for decades but oftentimes for good reason. In medicine, robots could be used to enable doctors remote interaction with patients in real time.

Robots are already being tapped to care for the elderly in Japan. Last year, the Japanese government invested 2.39 billion yen to spur the development of advanced nursing robots.

In addition, hospitals in California and other states are using telepresence robots to extend medical access to to rural and other underserved areas.

A growing number of hospitals in California and other states are using telepresence robots to expand access to medical specialists, especially in rural areas where there's a shortage of doctors. - See more at: http://www.jhumhealth.org/blog/telehealth-doctor-will-see-you-while-robot#sthash.2LE6pdPM.dpuf

Now, robotics are being employed by Google to drive cars, a technology which Chow incidentally thinks is at the peak of the Gartner hype cycle. While a self-driving car is not a medical device, the technology could potentially save a significant number of lives if it is able to help human drivers avoid accidents. In 2012, there were 34,080 automobile-related fatalities in the United States.

The number of sensors surrounding us is quickly increasing and, in the future, sensors that track our activity will be embedded into the environments of our homes and cars. Already, there are a number of products being developed that offer such functionality. There is, for instance, the EarlySense mattress-based patient monitor, the Xandem radio nodes for tracking movement within a house, and CarSafe, which detects a drivers' drowsiness when behind the wheel. Last year, researchers from University of Washington announced that they had made progress in tapping Wi-Fi signals to track movement of people within their homes while also enabling them to have Kinect-like gesture control of household devices.