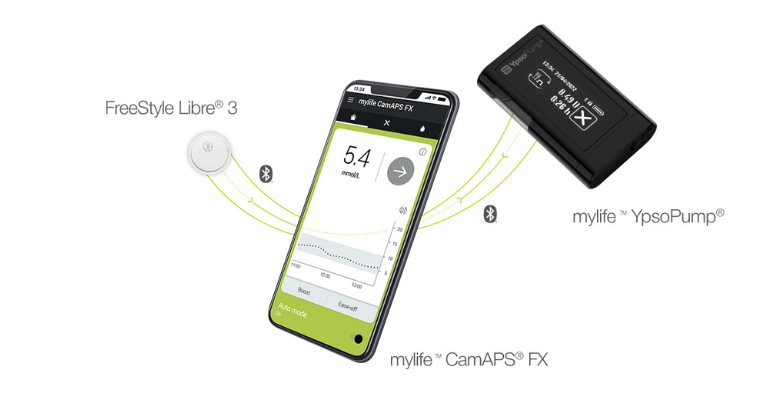 People with type 1 diabetes in Germany now have the option of a device designed to automate insulin dosing based on real-time glucose data.

The mylife YpsoPump and the FreeStyle Libre 3, combined with the mylife CamAPS FX algorithm from CamDiab, form an intelligent and automated insulin delivery system designed to help people with type 1 diabetes to better control their glucose levels and alleviate the burden of daily diabetes management.

According to the company, the CamAPS FX reduces the amount of time a person with diabetes must spend on managing and thinking about their condition.

“We are convinced that the major challenges facing society can only be solved through partnerships. We are therefore proud to expand our offering with Abbott to give the users of our mylife YpsoPump more freedom of choice in managing their diabetes. Our compact and easy-to-use insulin pump authorized to work with Abbott’s latest sensor and CamDiab’s adaptive hybrid closed-loop app will change the lives of thousands of people affected by diabetes,” said Sébastien Delarive, chief business officer of diabetes care at Ypsomed.

Companies like Ypsomed, Abbott, Dexcom, Senseonics, Tandem, and Insulet all made big strides this year – but there were also setbacks along the way. Overall though, 2022 was a year full of milestones for diabetes management technologies.

Earlier this year, Abbott nabbed FDA clearance for its FreeStyle Libre 3 system for people four years and older living with diabetes. That milestone came nearly two years after the Libre 3 system received a CE mark for use in Europe, however. The FreeStyle Libre 3 has a 7.9% overall mean absolute relative difference (MARD), making it the first continuous glucose monitoring device to demonstrate a MARD below 8%. MARD is the standard way to meausure continuous glucose accuracy. Abbott also said the Libre 3 sensor is the smallest and thinnest on the market at the size of two stacked U.S. pennies. Other touted features include a one-piece applicator to apply the sensor, and a strong Bluetooth integration (rang up to 33 feet).

Dexcom launched its latest CGM, the Dexcom G7, in multiple countries outside the United States this year. Unfortunately, the company's ambition of winning FDA clearance for G7 in 2022 has yet to come to fruition. In late July, the company said it had to make a subtle change to the G7 software based on feedback from FDA, delaying its expected timelines for FDA clearance. As of late October, the timing of FDA clearance for G7 remained unclear.

Senseonics also won CE mark this year for its long-term CGM technology. Unlike the XL System, the new E3 System has also been approved for non-adjunctive use, which provides for readings from the system to inform insulin treatment decisions without confirmation of glucose levels from fingerstick testing.

Insulet launched its Omnipod 5 automated insulin delivery system, a tubeless system that integrates with the Dexcom G6 CGM. That stride was soon followed by a setback, however, as reports began rolling in that heat generated by a poor connection between the Omnipod 5 cable and port has caused them to melt, deform, or discolor. Insulet issued a device correction for the Omnipod 5 controller in November.