As for Abbott's FreeStyle Libre, 'You Ain't Seen Nothin' Yet' 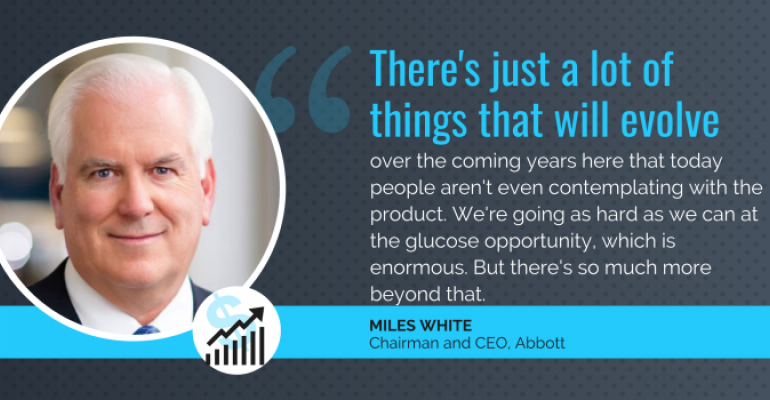 To quote a certain web-slinger currently on the big screen, with great power comes great responsibility. Abbott's FreeStyle Libre glucose monitoring system is a perfect example of how that widely-known quote from the Marvel Universe can – and should – apply to medtech.

Click below to listen to an audio version of this story, by Amanda Pedersen.

FDA’s approval of Abbott’s FreeStyle Libre Flash glucose monitoring system in 2017 was considered a major win for American adults with diabetes because the device eliminated the need for routine finger sticks, which had been the standard of glucose testing for more than 40 years. And according to real-world data presented at the recent annual meeting of the American Diabetes Association, using the device significantly reduces HbA1C levels in people with Type 2 diabetes.

"There’s a massive population that needs help managing their diabetes and our intent is to make Libre broadly accessible to all of them," Abbott CEO Miles White said during the company's second-quarter earnings call, as transcribed by Seeking Alpha.

Libre is a unicorn in the medical device world because of its mass-market potential and unprecedented growth. White estimated that there are more than 80 million people around the world who would benefit from the device, including both Type 1 and Type 2 diabetes patients. That translates into a massive market opportunity.

"It's unlike anything seen before in device or diagnostics businesses," White said. "To be honest, traditional medical device companies aren't used to having to deal with that kind of scale."

Suffice it to say, the FreeStyle Libre system represents great power for Abbott. And as any Spiderman fan knows, great power comes with great responsibility. In this case, Abbott's responsibility is to keep up with demand, make the product as affordable as possible, and make sure the patients who need the device have access.

"And so, we’re addressing that by investing very heavily in manufacturing expansion so that we can go after the mass market, not a niche," White said. "And so, I think the sustainability of the growth is driven not only by the innovation but the ability to go after much bigger markets at a much more affordable level."

White also noted that Libre is now reimbursed by about 75% of people with private pharmacy benefit insurance in the United States.

Abbott is reportedly expanding its capacity for Libre by three to five times. The first wave of that manufacturing expansion he mentioned is expected to come online in the next couple of months.

"There’s a massive population that needs help managing their diabetes and our intent is to make Libre broadly accessible to all of them."

Abbott recorded sales of $430 million for Libre just in the second quarter. Analysts expect it to approach $2 billion for the year, based on consensus, according to Matthew Taylor, an analyst for UBS.

"Does that mean that ultimately you think it could be a $6 billion to $10 billion product as you go mass market?" Taylor asked White during the question and answer portion of the company's earnings call.

The question was similar to one that Vijay Kumar, an analyst for Evercore ISI, asked during Abbott's first-quarter earnings call in April (Kumar asked if it had the potential to be a $5 billion product or higher). White got around the question last quarter by offering some indirect commentary, but this time the CEO took the question head-on.

He reiterated that the growth rate Abbott is seeing with Libre (which as of last quarter was in the ballpark of 80%) is driven not only by the size of the market but by the need, the utility, and the affordability of the product. Those three factors combined are what makes this a mass-market product, White said.

"I won't jinx anything by trying to make some prognostication about $10 billion, but I would say that I think it's got enormous potential, and it's got potential beyond glucose," White said. "It's got potential as a wearable and in other analytes and other products over time."

Abbott has R&D programs underway, he said, not only for the repeated enhancement improvement and expansion of Libre but also for its potential application beyond diabetes.

"So, I think that there's just a lot of things that will evolve over the coming years here that today people aren't even contemplating with the product," White said in response to Taylor's question. "We're going as hard as we can at the glucose opportunity, which is enormous. But there's so much more beyond that that I think, at least your aspirational consideration, to be honest, has validity. I'm not ready to put any numbers around it."