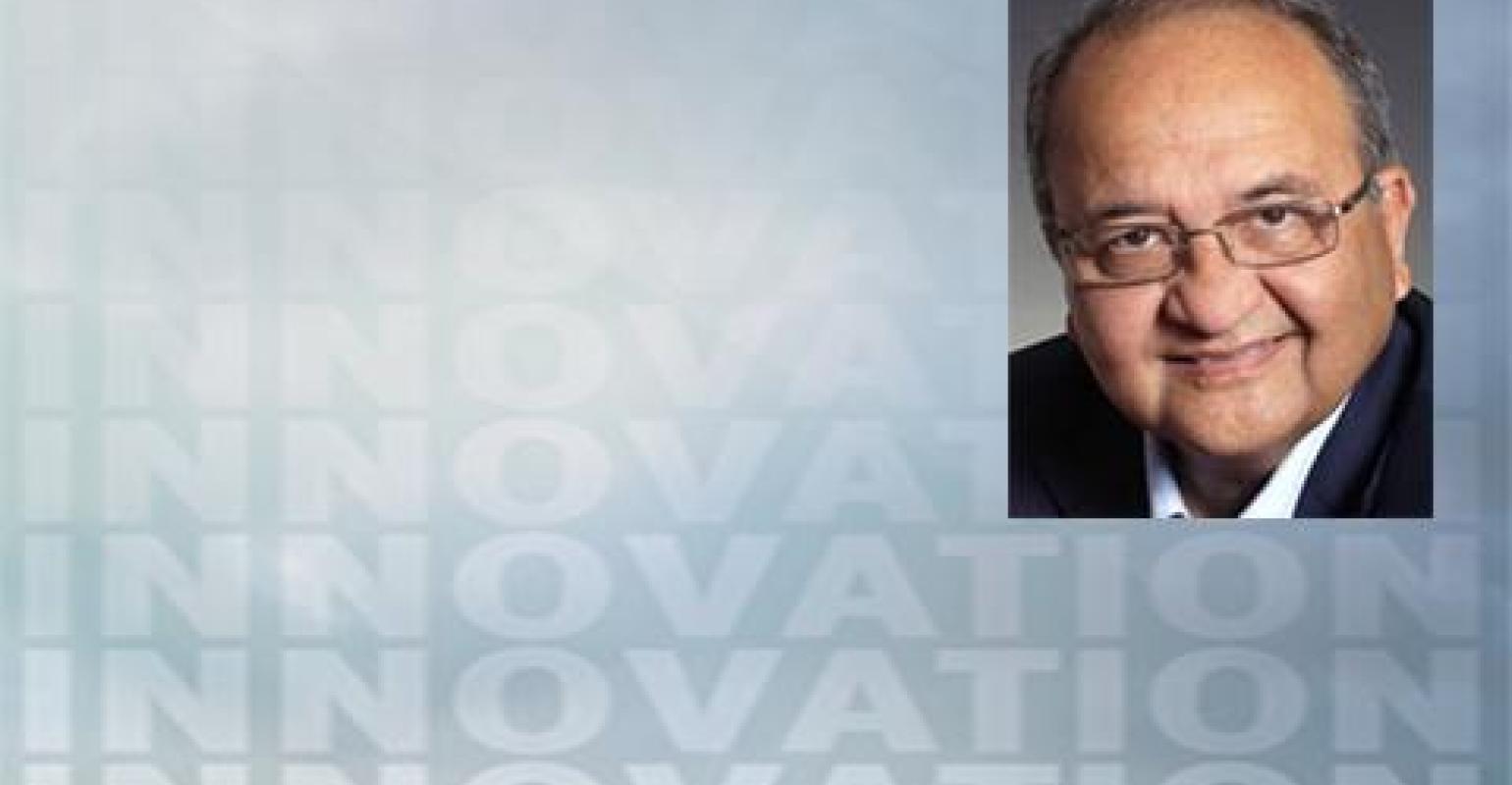 As a child in India, inventor Mir Imran was already an entrepreneur. He was developing custom toys and selling them to classmates by the time he was eight or nine. Before that, he had a habit of disassembling things to figure out how they worked. “When I was a few years old, I must have been a real nuisance because I was destroying everything around the house,” he says.

As a result, his mother began buying two toys at a time for her son—one to leave intact and the other to take apart. “I have to give a lot of credit to my mother who really encouraged this inquisitive nature that I had.”

By the time he was about eight, he decided it would be more fun to build things rather than take them apart. “I started building simple toys from fairly basic materials like wood, strings, and glue,” he says. After taking these toys to school, other children were impressed and offered to buy the toys from him. “That was a novel concept—getting paid for doing something that I really enjoyed doing anyway.”

By the time he was 11 or 12 years old, he had upgraded to experimenting with electronics. He enrolled in an evening class for radio repair, which he attended after his school day ended. Returning home each day around ten or eleven o’clock, he was the only child enrolled in the class.

Soon after that, he had the idea to build AM radios into matchboxes, which he also sold. “Because of the businesses I did, I always had cash, so I never had to ask my parents for money. With the money I made, I would invest in buying more new tools and materials,” he recounts.

Getting the Most Out of a College Education

Upon arriving to attend university, Imran had enough money to cover about two and a half years’ worth of college plus room and board. “I took advantage of the fact that once you were a full time student, which at that time cost $200 per semester, you could take as many credits as you wanted. So I would take 30 to 35 credits per semester,” he says. “I think they changed from a fee per semester to a fee per credit hour because of me,” he jokes.

His hands-on empirical experience that he began gathering at an early age crystallized for Imran in college. “All of it immediately fit together once I learned the theory in college. It became crystal clear,” he says. “By the time I actually had started engineering school, I had probably a dozen years of hands-on experience.”

By obtaining special permission from professors, he begun graduate coursework while technically still an undergraduate. “I would take graduate night courses just to fill in my calendar,” he recounts. “It was a very intense educational experience.”

Imran finished his coursework for a bachelor’s of science in electrical engineering in 1976 with the money he had brought with him. He received a scholarship for graduate school and, while earning his master’s degree, he also managed to find time to teach senior-level courses.

Imran founded his first companies while at Rutgers. He started his first company, a security monitoring firm, while still an undergrad. After a friend of his had been burglarized, Imran decided to put his engineering skills to use and develop a custom alarm system. He created a business and started producing the systems in a friend’s basement. The company pulled in $30,000 in revenue in its first year of operation. Despite earning a small profit, Imran considered his first business a failure because he hadn’t been able to market the technology as broadly as he had initially hoped.

Soon thereafter, he launched another security company. “I started the second company with a friend who was a packaging guru, who basically took what I had done at the first company and redesigned it to make it beautiful. It didn’t really work because I had turned my sights elsewhere. That was when I moved from New Jersey to Pittsburgh to develop the implantable cardioverter defibrillator (ICD). I was taken by the potential of that versus creating another little alarm company.”

The Turning Point: The Beginning of a Lifelong Fascination with Medical Technology

Imran first became interested in medical technology while still an undergraduate at Rutgers in the late 1970s. In a summer break between his coursework, Imran had the opportunity to help create a number of prototypes of communication aides to help children with cerebral palsy (CP). “Basically, The Matheney School for Cerebral Palsied Children was looking for somebody who was an engineer to come and develop some communication devices for some quadriplegic CP children,” Imran says.

“One of the girls was a beautiful six or seven year old who had such severe cerebral palsy that she couldn't communicate at all.” The girl had no control over her hands or legs. To help her, Imran developed a custom machine, which he interfaced to a couple of muscles in her body over which she had voluntary control. “She was able to use that communicator and it had such a profound impact on her and on me. In fact, I turned down the money that I was supposed to get for the project because I felt the experience was so powerful, that was payment enough. That was really the turning point for me and what began a life-long passion for medical innovation.”

Following that experience, Imran began to do research at Rutgers related to medical devices, including pioneering work on deep brain stimulation and wireless epilepsy patient monitoring systems to detect seizures. “There were a lot of projects I would dream up and collaborate with different researchers at the medical school,” Imran says. “I was not idle for a moment,” working on average about 16 hours each day.

He went on to earn a master’s degree in bioengineering and attended three years of medical school, which he left to focus on developing and commercializing medical technologies.

Imran explains that medical school in the 1970s was not a natural fit for him. “Everything I studied was rote memorization; very few things really had explanations. And at that time, there were fewer explanations in medicine than there are today,” he says. “That was frustrating. Growing up as an engineer, I was used to everything being deterministic. And here in biology, very little was known or understood," he says, "You had to sort of take people’s observations at face value. The textbooks at that time didn’t really contain much in terms of explanations of disease other than observations of it,” Imran adds. “One of the things that did hit me in medical school, however, was that there were so many unsolved medical problems,” he says. “I could have a field day using my training in engineering to address them.”

When the opportunity arose to help develop an implantable defibrillator, Imran jumped at it. His work ultimately helped lead to the development of the first FDA-approved automatic ICD, which was eventually acquired by Eli Lilly.

Imran then took on multiple medical problems at the same time and worked to develop products to address those clinical needs. “Many of the problems I saw at the medical school came back on my plate and I started looking at them from the perspective of solving those,” he says. “I just sort of threw away everything I had learned and built up a healthy skepticism about conventional wisdom in medicine. I think that really shaped my ability to innovate in a variety of areas,” he adds.

Since then, Imran has founded more than 20 life science companies and has obtained more than 200 patents—many of them related to medical technology. In all, he has developed dozens of medical device innovations including swallowable devices, ultrasound imaging systems, an ablation catheter for cardiac arrhythmias, a stomach pacemaker for the treatment of obesity, and an EEG monitoring sensor array for monitoring brain activity. He also serves a director for a number of other medical companies including Bodymedia, Spinal Modulation, Intrapace, NFocus Neuromedical, Fe3 Medical, Neurolink, Modulus, Corhythm, and InCube Labs.

Over the years, Imran has developed a unique philosophy to innovation based on his decades of work. “Innovation really becomes a fundamental quest for understanding the problem,” he says. “The strategy when I try to tackle a new clinical need, I spend a lot of time analyzing the problem.”

Before embarking on this frequently long journey of trying to understand the problem, an innovator can pass the problem through certain filters, asking questions like:

“You pass the problem through those filters and, if it meets those criteria, than you embark on this lengthy, sometimes very lengthy, journey of investigation to understand the problem,” he says.

Imran advocates constantly asking questions and being skeptical of published medical literature, most of which “either has bad data or inaccurate conclusions. Published data just serves as sort of a guide as to what people have thought about, but I don’t believe anything I see.”

Once the problem provides the innovator with a solution, the next stage is to go into the mode of analyzing the solution from a number of perspectives. An innovator should consider its commercial viability, potential intellectual property protection, how the product would be used and manufactured, what features the products should have, and so forth.

“This process is a structured framework but it offers a lot of freedom within it to explore,” he says.

Another crucial element is the willingness of the innovator to take risks. To be successful, an innovator and an entrepreneur need an amazing amount of determination. “It is the confidence that reassures you that no matter what problem is thrown at me, I am confident that I can solve it,” he says. “I always have said that unless it violates a law of nature, I should be able to solve it.”