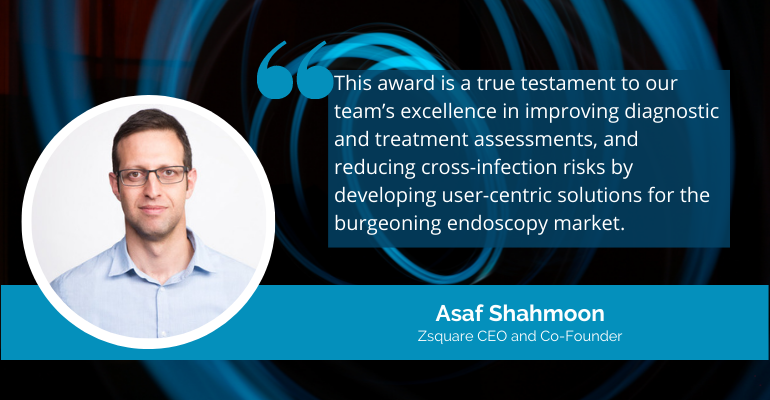 Zsquare’s endoscopes are designed with single-use shells to address the problem of patient infections caused by dirty scopes. The technology is a winner in the 2022 German Innovation Awards.

Difficult-to-clean endoscopes have plagued the healthcare industry and regulatory agencies for years and the number of adverse event reports related to contaminated scopes that lead to patient infections just keeps climbing.

In response to this problem, some manufacturers are developing single-use endoscopes, or scopes with disposable parts. One such company, Zsquare, was recognized this week in the 2022 German Innovation Awards.

The Tel Aviv, Israel-based company has developed a platform of flexible, single-use endoscopes designed to transmit high-resolution images. The company considers its polymeric fiber is a breakthrough in the world of miniaturizing visual fiber-optics. In addition to dramatically reducing the optical component’s diameter without compromising resolution, the two-part endoscope design allows the same imaging core to be used while switching indication-specific shells that are purpose-made for ENT, bronchoscopy, duodenoscopy, urology, gynecology, and more.

“This award is a true testament to our team’s excellence in improving diagnostic and treatment assessments and reducing cross-infection risks by developing user-centric solutions for the burgeoning endoscopy market,” said Asaf Shahmoon, CEO of Zsquare. “Our technology enables, for the first time ever, the dramatic reduction of the optical component’s diameter, improving image quality to achieve never-before-seen visuals. We are very proud to be recognized for our achievements, and more importantly, are anticipating the impact we can have on patient care as this tool is adopted in clinical settings.”

The award follows Zsquare's recent $15 million funding round, which the company intends to use for the pilot launch of its single-use ENT endoscope. Funds have also been allocated to boost R&D production with the plan to expand into other healthcare indications, the company said. Zsquare anticipates launching the endoscope in the third quarter, pending FDA approval.

This news follows the company’s recent announcement that it has secured $15 million in funding for the pilot launch of its single-use ENT endoscope. Funds have been allocated to boost R&D production with the plan to expand into other health indications. The pilot launch is expected in the third quarter of 2022, pending FDA approval.

Since 2015, the number of MDRs relevant to infection or contamination submitted to FDA has increased from under 100 per year to between 100-200 per year. There are about 500,000 bronchoscopy procedures performed annually in the United States alone, and the MDRs described above were received from all over the world.

FDA cautions, however, that although the MDR system is a valuable source of information, the limitations of a passive surveillance system mean that it should not be used to calculate the incidence of a specific event. It is often not possible to definitively determine the cause of the event based on the information submitted. MDRs are not, by themselves, definitive evidence of a faulty or defective medical device and cannot be used to establish or compare rates of event occurrence.

Dirty Bronchoscopes are a Bigger Problem Than Ever
Jun 25, 2021