You're Not an Engineer, You're a Creative Problem Solver 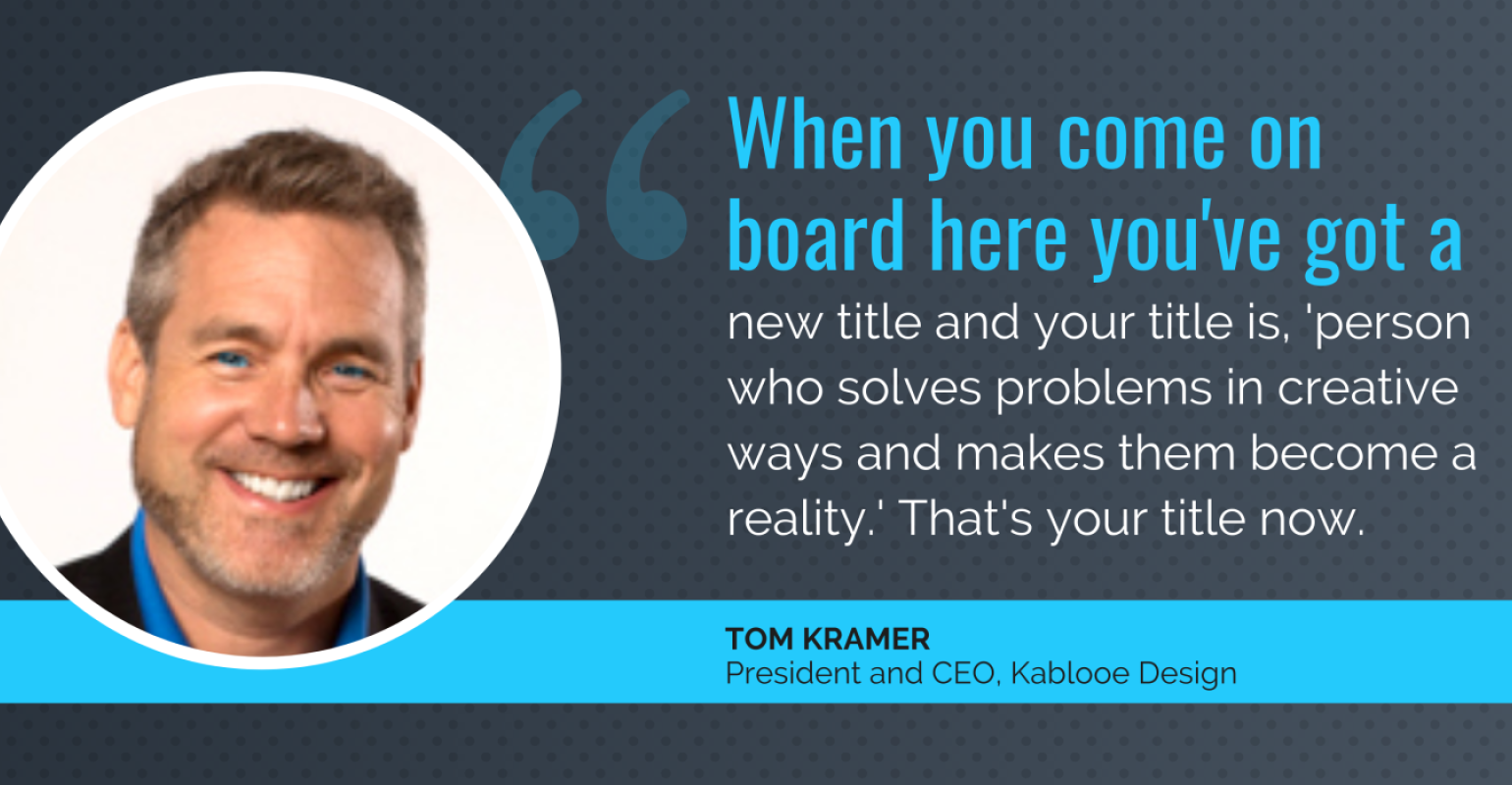 Tom Kramer, president and CEO at Kablooe Design, spoke at MD&M Minneapolis 2019.
A MD&M Minneapolis speaker used humor to make his point about why engineers and product designers need to see themselves as creative problem solvers.

If you ever go to work for Kablooe Design, you'll quickly learn you are no longer an engineer or a product designer.

"When you come on board here you've got a new title, and your title is, 'person who solves problems in creative ways and makes them become a reality'. That's your title now," said Tom Kramer, president and CEO at Kablooe Design, a Coon Rapids, MN-based firm.

Kramer participated in a point/counterpoint discussion at MD&M Minneapolis about the challenges of finding the right balance between design and functionality in product development.

To help make his point, Kramer told the following engineering joke: A doctor, a rabbi, and an engineer went golfing together. They kept having to wait on a group in front of them who were going through the course considerably slower. Finally, the doctor asked one of the golf course staff members what the deal was with the group in front of them going so slow and not letting them play through. The staff member explained that the slower group was part of a blind golfing association and all the golfers in the group were blind. The doctor said he had some friends who specialize in optical surgery and he wondered if his buddies might be able to help the blind golfers in some way. The rabbi was moved by the boldness of the blind golfers and said he would pray for them. The engineer, on the other hand, looks at the guy and asks, "why don't you just have them golf at night?"

Kramer explained that the joke was part of a neurological experiment designed to isolate different personality types and humor. The joke was specifically designed to get a laugh from engineers but not from any other professional group, he said.

"A joke is a series of described linear events that linerally attach to the one before it. It's like a staircase ... but then, at some point, a piece of information is given that is not linear and does not follow with the rest of them, and that's the punch line," Kramer said.

He said that during experiments with brain visualization researchers have noted that as a joke is being told, a lobe on the left side of the subject's brain lights up as the linear information is absorbed. Then, after the punch line is told, there's a brief moment when neither part of the brain lights up, followed by a lobe on the right side of the brain lighting up, and it's at that point that the subject laughs at the joke.

"What is your brain doing as you're interpreting this joke? You've got these linear pieces of information that all make sense and you're given one piece of information that doesn't make sense and you have to fit those two things together and make sense out of them, and when the only way to make sense out of them is to put them together in a way that is not linear it becomes humorous," Kramer said. "So what are you doing? You're solving a problem. The workload moves from the left side of your brain to the right side of your brain to solve that problem."

That's also the lobe that is responsible for creative problem solving, Kramer said.

"So in product development today I contend that one of our biggest problems as we're talking about design ... is really how we see ourselves," he said. "We pigeonhole everybody and everything."

Regardless of your training and background in engineering and even on the design side, Kramer said, if you are developing a new product your job is to understand how to solve problems for humans.

"You're a creative problem solver. That is what you're tasked to do," he said.