New Honeycomb Plastics Can Sense When They Have Been Damaged 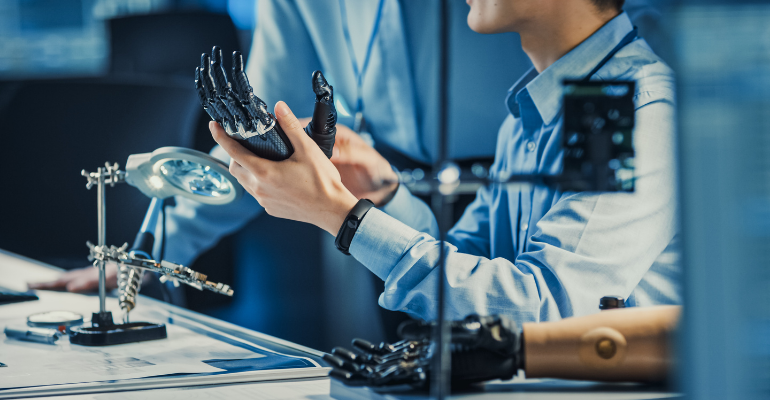 Engineers have developed plastic-based honeycomb structures that could find use in new forms of smart prosthetics and medical implants.

A new form of lightweight, impact-resistant plastic-based ‘honeycomb’ structures which can sense when they have been damaged could find use in new forms of ‘smart’ prosthetics and medical implants, its inventors suggest.

In a new paper published in the journal Materials & Design, a University of Glasgow-led team of engineers describe how they have used 3D printing techniques to add new properties to a plastic known as polyether ether ketone, or PEEK.

The team added microscale carbon fibres to their cellular PEEK structures, giving the usually non-conductive material the ability to carry an electric charge throughout its structure.

They wanted to investigate whether damaging their electro-conductive cellular PEEK composite would affect its electrical resistance. If so, it could give the new material the ability to ‘self-sense’ – allowing a hip implant, for example, to report when its conductivity has changed, indicating that it has worn down and needs to be replaced.

Then, they subjected the cellular structures to two types of loadings to compare their respective abilities to absorb energy. In crush tests, where consistent pressure is applied until the structure collapses, each design of the carbon-fibre PEEK was outperformed by its conventional PEEK counterpart, which were able to withstand higher pressures.

However, in impact tests, where a weight is dropped from height onto the structures, the three carbon-fibre PEEK structures demonstrated greater resistance to damage. The hexagonal honeycomb configuration of the carbon-fibre PEEK had the best response, withstanding greater impacts than any of the others.

In the crushing tests, the researchers also measured the carbon-fibre PEEK cellular structure’s resistance to an electric charge as the three different structures were strained. The change in resistance to applied strain - a measure of damage progression known as the piezoresistive sensitivity - decreased as the compressive strain increased, leading to a near complete loss of electrical resistance when the structures were completely crushed. The different gauge factors observed for different configurations is associated with their rate of damage growth in accordance with their ability to absorb energy, suggesting that the piezoresitivity of carbon-fibre PEEK could be of benefit in creating a new generation of smart lightweight multifunctional structures.

Shanmugam Kumar of the University of Glasgow’s James Watt School of Engineering, is the corresponding author of the paper. Colleagues from Khalifa University in the United Arab Emirates and the University of Cambridge in the UK also contributed to the research.

“3D printing gives us a remarkable amount of control over the design and density of the cellular structure. That could allow us to build materials which more closely resemble the physiology of the native bone than the solid metal alloys traditionally used in medical implants like hip or knee replacements, potentially making them more comfortable and effective," Kumar said.

The team’s paper, ‘Energy absorption and self-sensing performance of 3D printed CF/PEEK cellular composites’, is published in Materials & Design. The research was supported by funding from the University of Glasgow and Khalifa University.