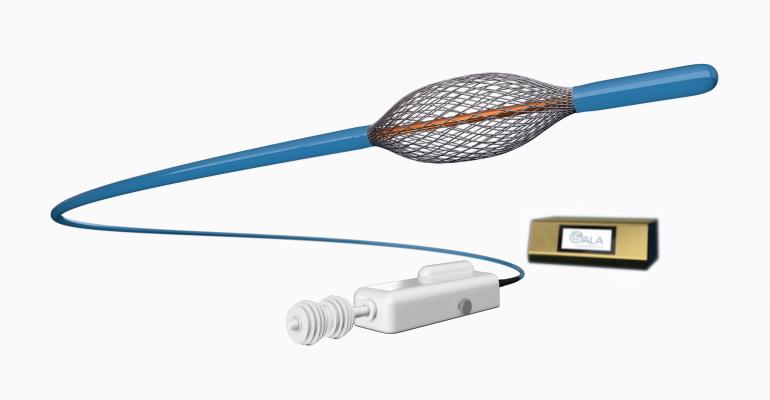 Image of RheOx courtesy of Gala Therapeutics
RheOx, a novel therapy that delivers nonthermal energy to target and ablate mucous producing cells in the airways, has received an FDA Breakthrough Device Designation.

“Imagine somebody that gets bronchitis every day, with a cough so severe that they can’t talk in full sentences, they can’t sleep at night, and they can’t walk a decent distance,” said Jon Waldstreicher, MD, CEO of Gala Therapeutics, in an interview with MD+DI. Although someone with this condition might present to physicians with normal lung function, their chronic cough and mucous production negatively affects their quality of life.

Until now, there has been no way to treat these debilitating symptoms effectively, even with medication. “We know that the best inhalers do not target the cough,” Waldstreicher said, noting that such treatments are directed at bronchodilation and reduction in inflammation only, without addressing the overproduction of mucous.

But a new technology is showing promise for patients. RheOx, developed by Gala Therapeutics, is a novel ablation technology that employs an electrosurgical generator and a single-use catheter to deliver nonthermal energy into the airways of patients with airway dysfunction or dysfunctional mucous secretion cells.

The device uses electrosurgical energy to create magnetic fields. “That causes disruption of cells in a nonthermal way,” explained Waldstreicher. “So, as compared to the typical heat-like radiofrequency ablation or microwave ablation, or versus cooling therapy like cryoablation, this [system] nonthermally allows for a much gentler form of cell death.”

“The energy dosage has been fine-tuned so that we actually target multiple types of cells, which is beneficial,” said Waldstreicher. The cells are ablated over the course of a couple days, and they regenerate normally. “We've done a lot of animal work, and we've looked at biopsies from our first human patients, and they're able to regenerate much more normal and healthier epithelium and submucosa.”

Waldstreicher said because there is currently no available treatment that provides the same relief from symptoms, RheOx recently received a Breakthrough Device Designation from FDA. He said there is a huge population that will benefit from the system.

“You have all these patients out there who have exposure to various pollutants or on-the-job work-related exposure,” he said. “And it goes anywhere from bakers who inhale flour to coal miners. And now vaping is causing a tremendous number of cases of bronchitis and will certainly lead to chronic bronchitis.”

The treatment so far has shown effectiveness up to six months, with some patients doing very well as far out as a year after the procedure, Waldstreicher said. “Giving them even at least a one-year improvement in symptoms is significant. It’s life changing for some of these people.”

RheOx has recently received the CE mark in Europe and the company is in the process a starting a postmarket registry study in Europe. The first patients in the United States will begin treatment in a few select centers within a few weeks.