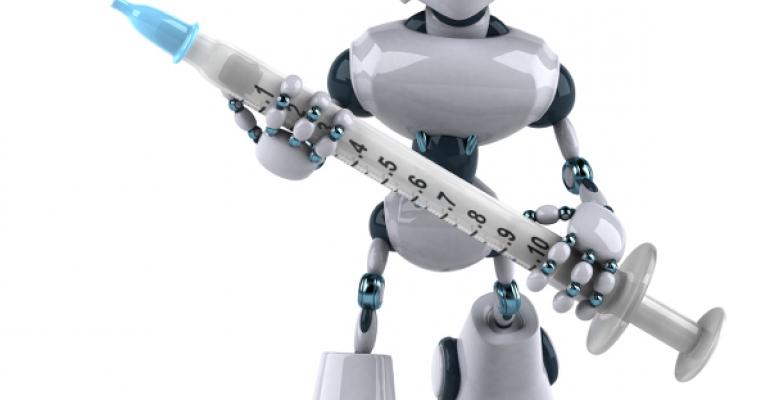 Here&#39;s how test-driving expensive medical robots felt like to an average Jane, writes an MD+DI editor.

Here's how test-driving expensive medical robots felt like to an average Jane, writes an MD+DI editor.

We are far from that of course — and here's hoping we never get there — but it would be fair to assert that medical robots have, in fact, arrived.

How much they make their presence felt in the world of healthcare is a matter of economics, outcomes and adoption. Judging their success so far is for much keener minds than mine, but when offered the chance to test drive these million-dollar machines recently, I did not hesitate.

First up, was Intuitive Surgical.

A 20-minute drive from my abode in San Jose, CA, brought me to the headquarters of the pioneering force behind surgical robotics.

It was, in a way, an odd homecoming for me.

Back in 2001, as a rookie reporter in the proverbial first job from hell, I got to see an Indian-American surgeon perform a procedure using Intuitive Surgical's da Vinci robot. The surgeon had a twinkle in his eye as he got down to business. As he pushed the levers around at the surgeon console, he made a statement that has stuck with me all these years.

"I am like a kid at a Nintendo machine."I am not a video game aficionado — my experience with them stops at the handheld Donkey Kong and the desktop game Prince of Persia, never having quite made the leap to Pokemon, let alone Nintendo, PlayStation or Xbox.

But still, the comment resonated as I stuck my head into the viewing area of the surgeon console of the da Vinci system in a demo room a few weeks ago. It showed me in clear 3-D what havoc I would wreak on the sponges, rubber bands and wires that made up the mock surgical area inside a fake abdomen if I moved my fingers one way or another moving the levers that guided the robot.

And so I went at it, moving my thumb and forefinger and the expensive da Vinci Xi, standing a few feet away towering over the "patient" dutifully moved its instrument arms, following my bidding, tearing a sponge here, moving a rubber band there. Large screens displayed those movements in 2-D in real time.

There are safeguards of course. The surgeon console is intelligent in that if I raise my head from the viewing area to look elsewhere and still have my hands in the levers that power the robotic arms, no random hand movements of mine will register on the Xi.

Thank god for that.

The robot — which not surprisingly will take up a lot of room in the OR — is surprisingly quiet. During a demo, the arms moved almost imperceptibly. I could imagine for a busy surgeon, being seated could be less tiring, if he or she is used to doing multiple surgeries in a day.

A polar opposite experience greeted me when I tried my hand at the Mako surgical robot that Stryker, the orthopedics device maker, believes will forever transform how joint replacement is done.

This time I was at the annual meeting of the American Academy of Orthopaedic Surgeons (AAOS) that concluded last week in Orlando, FL.

Many hundreds of companies were exhibiting their latest and greatest products there, and Stryker was no exception. Whereas last year, the robot was hidden away in the booth area reserved for the eyes of curious surgeons only, in 2016 it was in full view. Stryker employees were giving demonstrations and letting whoever was interested get their hands on the device.

Here the setup is markedly different. There is no surgical console and the surgeon is directly working on the patient using the robot — in this sense, orthopedic surgery is robot-assisted. I donned a coat to protect myself from the fake bone residue that would fly when I drilled away with Mako.

But there was a problem.

I couldn't get the robotic arm that had the bone-drill equipment — the knee effector as it is called — to move. In a few moments, the Stryker rep had an answer. I needed a booster seat! At 5 ft. 1 inch, my presence is less-than-imposing, and so he ran out to get me a box that I could stand on.

I remarked out loud that the robot might have some problems being adopted in Japan - the average height of Japanese men is 5 ft. 7.5 inches and that of women is 5 ft. 2 inches. Not to mention my home country — India.

Anyway, after getting that much-needed lift, I started to drill in the area marked on a display screen. It was hard to look up at the monitor that serves as a visual guide to where you have to cut. The natural inclination is to look at the patient in front of you instead of at a screen. In fact, the monitor had shown red signifying that I had cut way too deep long before I thought to look up. The Stryker rep explained that there is a certain learning curve to relying on the monitor.

That is to be expected of course, in both systems.

The two robotic experiences could not be more different, perhaps as it should be given that the da Vinci robot was created to do soft tissue procedures while the Mako deals with hard parts of the human body.

I came away with a new-found respect for the strength that orthopedic surgeons must possess or at least develop in order to to do these procedures throughout their career. And gratitude for certain experiences — Nintendo like or not — that only journalists, despite being lay folks, can be privy to.