How Philips is Using Design to Disrupt Hospital Environments 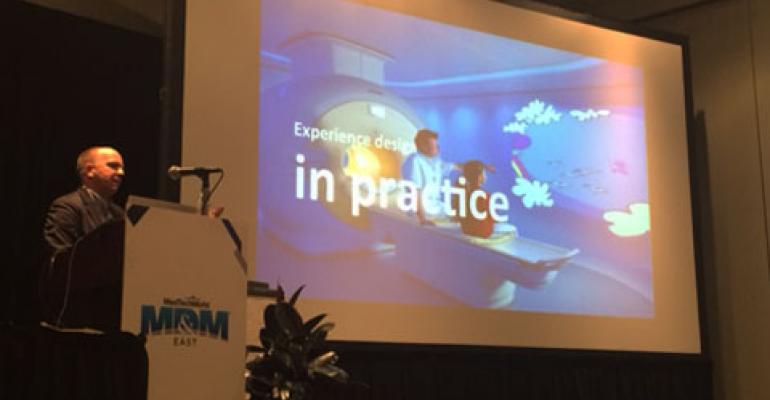 Philips Healthcare is leveraging its design consulting practice in a unique twist on the trend of medical device makers becoming solutions providers.

Philips Healthcare is leveraging its design consulting practice in a unique twist on the trend of medical device makers becoming solutions providers.

Medtronic launched its hospital solutions business back in 2013, and since then the idea of device companies supplementing their nuts-and-bolts products with services to help providers improve the delivery of care has been gaining traction.

In a keynote today at MD&M East, Sean Hughes, chief design officer for Philips Healthcare, explained how his company is using design to add value to its healthcare offerings.

Designers, Hughes told the audience, do more than choose the color for a device. “Our function can be a competitive advantage for the company,” he said.

Like other device makers, Philips tasks its designers with giving a consistent look and feel to its family of products and optimizing user interfaces. But the company also extends the design team’s reach beyond its products.

“Increasingly, you also have to think about environment in which care is given,” Hughes said.

“The experience around it was lacking,” Hughes said.Take, for example, capital equipment like MRI machines. Philips realized that its customers were making large investments in the equipment itself but not necessarily in the rooms in which that equipment would be used.

So back in 2007, the company dreamed up a proof-of-concept for a pediatric MRI room featuring ambient lighting and projected video animations to help relax and distract children during the procedure. Since then, the concept has been rolled out in more than 500 locations around the world and has resulted in lower sedation rates for children and increased productivity from the staff.

After that success, Hughes said Philips began thinking even bigger. Could they help customers optimize the design of an emergency room? A whole department? An entire hospital?

And so Philips’s design consulting practice was born.

Hughes, who heads up the effort, shared an example of a recent project the team undertook to redesign Broward Health Medical Center’s infusion center for cancer patients. The center had good quality outcomes, but when it came to providing a patient-friendly environment and experience, the center fell short.

Philips brought in a multidisciplinary team of designers and gathered feedback from the infusion center’s executives, staff, and patients to settle on a vision for the space. The resulting design, which also featured Philips equipment, improved patient experience and increased workflow, Hughes said.

Looking ahead, Philips is exploring ways to combine its design team’s efforts with connected technologies to improve challenging healthcare environments such as the neonatal intensive care unit, Hughes said.