How a Flat Tire Inspired a Breast Device

AirXpanders is touted as a less painful alternative to saline shots for mastectomy patients. 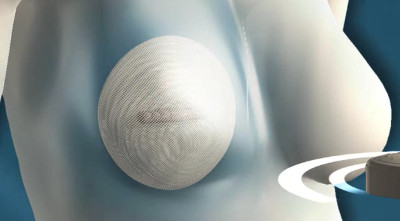 It all started with a flat tire. San Jose, CA, plastic surgeon Daniel Jacobs pulled out a carbon dioxide cartridge to fill a bicycle tire and began to wonder if he could use the same technology in a breast tissue expander.

Eleven years later, the company built from that idea has completed a pivotal trial and is awaiting a 510(k) decision from FDA. AirXpanders is looking to market its device, the AeroForm, a needle-free, wireless tissue expander system for patients who choose to have reconstructive surgery following a mastectomy.

Following a mastectomy, the AeroForm tissue expander is placed underneath the chest muscle to enable the chest wall to be stretched to make room for a permanent breast implant. The device contains a reservoir of compressed carbon dioxide. Using a hand-held, wireless dose controller, the patient can release 10cc of CO2, up to three times per day, to gradually inflate the expander. This can be done from home or work, and only takes a few seconds, according to the company.

It's an alternative to the traditional method of saline-based tissue expansion, which requires multiple medical office visits and can be painful. Each injection of saline, which can be up to 60 cc, may be painful because it stretches the skin so much, explained principal trial investigator Jeffrey Ascherman, MD, of the Columbia University Department of Surgery, in an interview. Because the AeroForm only allows 10cc of CO2 to be released at a time, the skin stretches less and it may not hurt so much, he added. If a woman wants to skip one or two doses or even an entire day, she can do that, too.

The device's pivotal trial, XPAND, recently met its primary endpoint, including 150 patients across 17 sites in the U.S. The trial showed that time to expansion averaged 21 days for the AeroForm group versus 46 days for saline group. Results of the randomized, controlled trial are scheduled to be published November 28 in the journal Plastic and Reconstructive Surgery.

AirXpanders has sold 600 units in Australia, where it has been available since 2014, according to marketing director Jennie Kim. The device received the CE Mark in Europe in 2012, but the startup has chosen to launch in the U.S. first should it receive approval here. The company expects a decision from FDA by the end of 2016, Kim said.

Ascherman told MIT Technology Review that the device could represent the first major change in breast tissue expansion in 40 years. Surgeons have tried to improve on the saline method of breast-tissue expansion over the years, but none has proved better, Asherman added.

Other breast-tissue expanders, such as a self-filling hydrogel device that expanded by osmosis, have not improved on the saline method, he added.

"It puts them in charge of their treatment," Ascherman said of the AeroForm. "It's a real game-changer. It's super-easy to use. You just press a button and that's it."