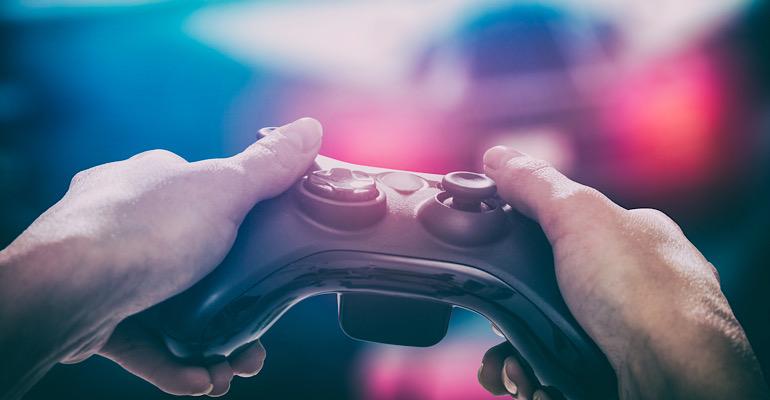 How learnings from the gaming industry are influencing surgical device design.

For close to a decade now, we've seen a growing interest in cross-pollination between the gaming world and medtech. As early as 2012, researchers were hacking Microsoft's Kinect for XBox 360 for all sorts of medical purposes — including gesture-based telesurgery.

Now, as surgical robotics companies are looking to level up in an increasingly competitive market, high-performance gaming technology has advanced to the point where the two industries are truly ready to collide. To learn more about the gaming industry, and how it can influence surgical device design, MD+DI spoke with two experts at Design Partners.

"Over a decade ago gamers were kind of geeks in their bedrooms and currently the gaming industry is set to be worth around $300 billion by 2025, it's currently over the $100 billion mark, which means it's bigger than the movie industry and the music industry combined," said Cormac Ó Conaire, creative director and a partner at the Wicklow, Ireland-based product design firm.

Part of what is driving the incredible growth in gaming popularity is huge international tournaments where professional gamers compete for vast amounts of prize money, sponsorships, and prestige, Ó Conaire said.

"To compete at this level it's no longer toys that you're gaming with, you need highly-specialized equipment perfectly tuned to your e-sport athlete needs," said Ó Conaire, who has been designing award-winning gaming products for the past 15 years for brands like Logitech, Dell, and Alienware.

How is this relevant to surgical device design?

First, we've seen how the surgical profession has embraced gamification in the form of virtual surgical simulation both for training purposes and procedure planning. Combine that with the speed at which telemedicine is currently moving, and the growing interest in telerobotic surgery, and it's only a matter of time before high-performance gaming capabilities truly disrupts the future of surgery.

"Gamers and surgeons, they share very important qualities. This appreciation for precision and accuracy. Visual and spatial skills. Depth perception. A lot of the more modern surgeons are essentially staring at screens while they're performing their tasks and they have this requirement for total immersion in their task for hours on end," Ó Conaire said. "So the gaming industry, as it's growing, there's millions being pumped into innovation, so how we look at it is, 'how can we take this learning from the gaming space and combine it with our healthcare design expertise ... to improve surgical devices and patient outcomes?'."

For Design Partners, that's where Eugene Canavan's expertise in surgical device design comes into play. Canavan, an industrial designer and human factors/ergonomic specialist who leads the firm's healthcare design team, has more than 25 years' experience in designing products for clients like Abbott, Medtronic, and Shire.

"Sometimes I kind of see the world of medicine inside the body as it's almost like Star Trek," Canavan said.

As minimally invasive and robotic surgery advances — along with miniaturization —  surgeons are deploying things like stents and transcatheter heart valves through incredibly small openings and navigating them through tortuous anatomical routes to increasingly distal areas of the body.

"Mechanical deployment handles that are common in surgical applications now are teetering on the edge of what's humanly possible," Canavan said. "The interesting thing about how the human body works is that humans can be very precise, or they can use a lot of force, but it's very unusual to be able to do both. So if I wanted to do something with a lot of force, I usually end up sacrificing a lot of precision, and of course in the world of surgery that's a huge sacrifice."

That's why motor-driven deployment devices have emerged as a promising addition to the robotic surgeon's toolbox.

"If you have a motor-driven device, you're taking the force element out of it," Canavan said.

He said the Monarch robotic system, which Johnson & Johnson inherited through its $3.4 billion acquisition of Auris Health last year, would be a good example of this trend.

"Once that starts to happen, the world of gaming and surgical have confluenced together, they begin to collide. So one can learn off the other." Canavan said. "... With these motor-driven devices we can start to elevate human potential to go deeper and further into the body, without losing precision."

With this trend in mind, Design Partners created a surgical device concept called Motus/D (shown below). It's a motor-driven stent-delivery device with in-handle electronics designed to enable the trigger to be pressure-sensitive, controlling the wire steadily and accurately. 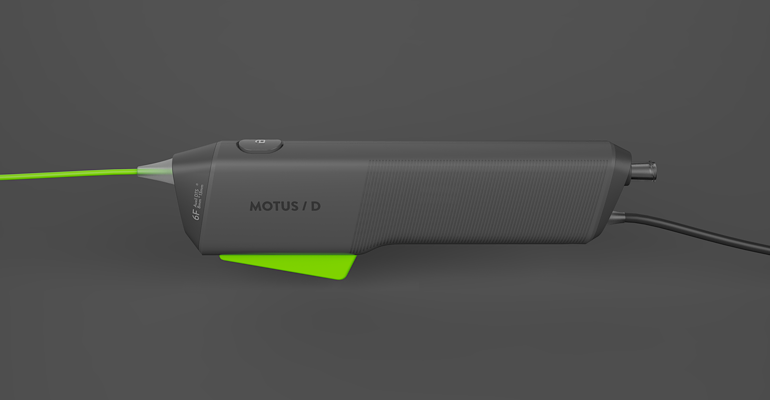 The handle is light and compact, making it easier to use but also highly efficient in the relatively tight space around the patient, the two Design Partners experts explained. They also noted that the design is small, with a minimum number of parts that can be easily broken down and recycled.

Most importantly, they emphasized, the device is designed to enable the surgeon to completely concentrate on precision, rather than struggling to achieve the right level of force. Like the gamer, the surgeon controls the handle and decides to slow down or speed up based on what’s happening on-screen. The surgeon now has a level of control that doesn’t exist with conventional mechanical devices, they explained.

Are there any drawbacks to motor-driven surgical devices versus mechanical deployment tools?

"Motor-driven devices have more responsive control because there isn't so much of a mechanical delay, but there is a challenge in the feedback that the surgeon would get," Canavan said. "What [surgeons] rely on is feel. So we need technologies that are smart enough to allow them to deploy greater forces in harder and more difficult areas and give them [haptic] feedback."

Haptic feedback is also becoming a buzzword in the gaming world. Most modern gaming experiences incorporate vibration through a keyboard or handheld controller to simulate a player firing a machine gun, for example, or crashing into another vehicle in a racing game. But haptic feedback introduces a much wider range of vibration intensity depending on the experience being simulated, according to GamesRadar+.

"One of the success stories at Design Partners and the healthcare clients that we have is that we build this level of immersion into the design process through designing for the senses," Ó Conaire said. "We call this sensory engagement. ... Humans experience the world around us through multiple sensory impulse, our brain is locked in this dark cavern of our skull with no access to the real world apart from through our senses. ... In the design process that we've developed we really focus on sensory awareness."

And he's not just referring to the five basic senses (touch, sight, hearing, smell, and taste).

"We actually have anywhere between 10 and 33 senses, depending on how you classify them," Ó Conaire said. "So creating products with sensory awareness means that we can work at a higher level of precision and control, deeply understanding things like tactility, and ergonomics and human factors, as Eugene highlighted."

That level of sensory awareness becomes exponentially more important as the industry moves closer to widespread adoption of telerobotic surgery.

"We want to make sure that before the entire healthcare industry starts trotting into these kinds of future experiences that the experiences are founded on really great principals of immersion and control and precision," Ó Conaire said.