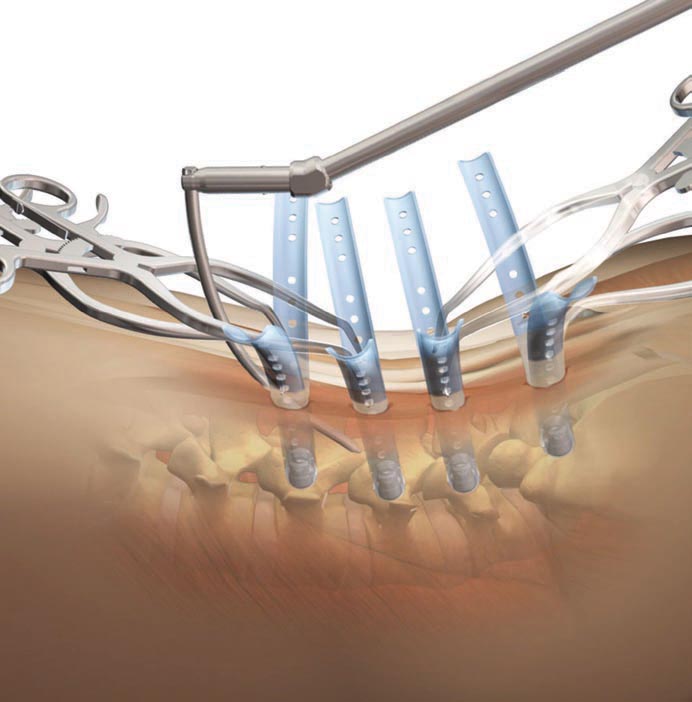 The peculiar image of someone fashioning a crude medical product out of plastic funnels from the hardware store and then testing it on cadavers seems like a scene from a movie or a television show. But in the case of the Serengeti minimally invasive retractor system, this kind of creative experimentation led to the development of an MDEA-winning design that allows for one-step percutaneous placement of pedicle screws.

Frequently employed in spinal fusion procedures, pedicle screw fixation systems are engineered to stabilize and support healing vertebrae. The systems, which consist of a series of screws connected to and immobilized by rods, are increasingly implanted using minimally invasive systems in order to minimize patient recovery time as well as muscle and tissue damage. Aside from being minimally invasive, however, the single-use, plastic Serengeti retractor differs greatly from competing products in seemingly every way, according to its manufacturer, K2M Inc. (Leesburg, VA).

The design of the Serengeti evolved from an initial conversation with a surgeon that proposed the concept of a screw-based retractor. "Most retractors on the market are table mounted, so they're fixed to the table. But if you move the patient, it disrupts your field," explains Kevin Strauss, director of research and advanced development at K2M. "Other retractors are tube style that sit on the back of a patient, but tissue and blood get in the way, and every time the patient moves, the retractor shifts." If the retractor were fixed to the patient, the surgeon suggested, it would move with the patient instead.

Jumping off from that point, the company explored the viability of a plastic, single-use retractor that could be inserted with the pedicle screw and secured underneath. The company soon realized that the single-use plastic construction of the Serengeti would allow surgeons to open up the system using a gelpi retractor and visualize the screw head--a feat not possible with conventional metal systems. "That provides a lot of benefit to the surgeons," notes Lindsay Curtin, associate product manager for minimally invasive products at K2M. "It allows them to see the screw head, which makes rod passage easier. [Rod passage] is one of the most complex parts of minimally invasive surgery, but it is one of the easiest parts of our system."

Upon graduating from testing computer solid-model designs on plastic hardware funnels and cadavers, the K2M team next partnered with Orchid MacDee (Chelsea, MI), a service provider that specializes in injection molding and CNC machining. "We needed a plastic material that was strong enough to hold off the muscle to create the retraction needed but was still flexible enough that it could open without breaking," Curtin says.

From K2M's CAD models, Orchid MacDee first provided machined UHMWPE prototypes and test tubes that were modified to better mimic the actual design of the product. "After several attempts at machining the product out of UHMWPE, we were unable to get the right feel and score. We located a polypropylene test tube that was similar in size," recalls Jim McGinn, Orchid MacDee's molding product manager. "We took the test tube and machined it to replicate the models, so that got us a little bit closer at a reduced cost to the customer."

But despite the progress, K2M encountered a substantial roadblock in determining how to remove the retractor upon completion of the procedure. Because it was inserted with the screw and held underneath, the geometry of the distal end of the product needed to be strong enough so that it wouldn't fail during screw insertion. And yet it also had to be removable. Following many iterations and mounting frustration, Strauss proposed just breaking the product. "A light bulb went off," Strauss says. "We [developed] an instrument that I could make very simply that would apply an equal and opposing force on the screw head and retractor. By using this instrument--we called it a retractor distracter--we can pull the retractor right off, break it in two pieces, and you're done."

To facilitate breakage at the desired point, Orchid MacDee machined perforations into the inside of the retractor after molding so that the product would break at those weakened points when the push-pull force was applied. The challenge of identifying the optimal depth and location of the score marks was further compounded, however, by the difficult-to-machine thin walls of the part, according to Mike Ulanowicz, Orchid MacDee's director of sales. Eventually, when both companies were satisfied with the design and ready for full-scale production, the service provider was able to create the perforations while in the mold, ultimately eliminating secondary processing and reducing costs of the final product.

"[The Serengeti] allows surgeons to do their kind of surgery, whereas other systems dictate how the surgery has to be done," concludes Strauss. "With our system, the surgeon has more freedom to do the surgery they want to do and we're just the tool to help them."