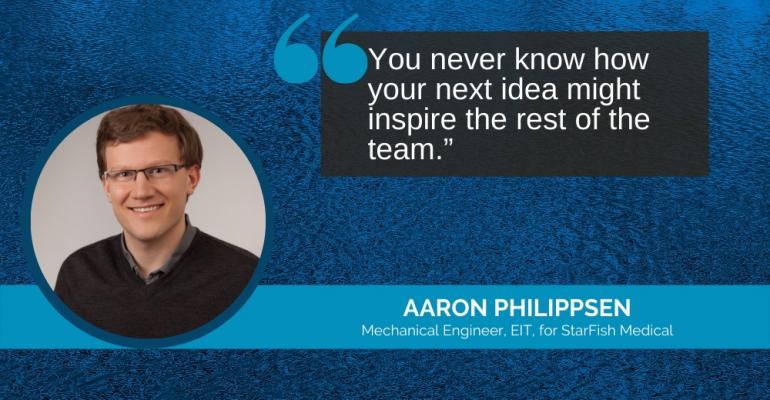 Miniaturization is a chance to think a little differently to successfully integrate subsystems into compact medical devices.

Engineering decisions have additional constraints in the miniaturized realm. As medical device innovators seek to maximize functionality in a compact footprint, mechanical and electrical systems must share limited space. Engineers working on such medtech miniaturization must collaborate on design and integration.

“In a miniaturized electromechanical device, the mechanical and electrical systems become more tightly integrated, and subsystem integration takes on more risk,” Aaron Philippsen, mechanical engineer, EIT, for StarFish Medical, tells MD+DI. “Take a PCB, for example. In a larger electromechanical system, you can estimate how much space the PCB needs and reserve a little extra in case more space is needed later. Mechanical development can progress around the reserved space while the electrical design matures within the reserved space.  If you need a larger motor or the final PCB needs a few more components than first anticipated, you have a buffer to accommodate the change without reworking either subsystem.

“However, in miniaturized devices, space is pushed to the limit. You can’t leave any buffer, and you can’t realize maximum spatial efficiently until all subsystems are fairly mature,” he continues. “When we were working on electromechanical systems for an ingestible capsule, everything needed to fit within a 12-mm-diameter cylinder about 30-mm long. Things like battery choice, PCB area and shape, and IC dimensions had a major influence on the capsule's internal structure and what actuators and mechanisms were feasible to use. The design for the capsule interior took a lot of innovative development from the electrical team and the mechanical team with regular exchange to find an architecutre that met space constraints.”

In addition, integration becomes a greater challenge with mechanical miniaturization, Philippsen says. “On larger systems, you can spatially decouple subsystem design. Adding a few centimeters of clearance inside a mobile cart is inconsequential, but that can let you block out a generous volume for the device’s subsystems. As the subsystems mature, they can grow into the allocated space and become the final device without further development.”

However, “in a miniaturized device, everything is designed to maximize the use of space, and you need a fairly mature design for each subsystem before you can design a spatially optimized version of each subsystem. You need functioning subsystems to derisk the device's basic technology, but when they are first shown to work, these proof-of-concept subsystems are unlikely to integrate with spatial efficiency. They become a guide to designing the integrated device rather than its direct building blocks,” Philippsen says. “You may be surprised how promising design ideas lose viability when modeled together at scale. It can be helpful to do CAD-based integration early and to plan for several integration attempts with several competing architectures. You may miss the mark with a few integration attempts before getting to the final device architecture. However, each attempt is a valuable learning experience.”

Philippsen says that miniaturization is an opportunity to think a little differently about your own discipline. “How many different ways can I provide the required function? How do my solutions interact with the other disciplines and subsystems? You can really help by digging up as many options within your own discipline as possible and by staying up to date with work in the other disciplines. You never know how your next idea might inspire the rest of the team.”

As a final thought, Philippsen says that “we always push to get everything the client wants into their device, but miniaturized devices seem particularly sensitive to minor changes in requirements and more burdened by optional features. Making a small compromise, like reducing range of motion by few degrees of tilt or adjusting the feature set, could result in a much simpler device with reduced development cost or a faster path to market. It’s helpful to clearly differentiate needs from desires, to spend the effort required to precisely define the challenging requirements, and to stay open to change in case an opportunity arises during development.”

StarFish Medical will be exhibiting at the upcoming MD&M West expo April 12-14 in Booth #1482.

How Nufabrx Is Changing the Medical Landscape
May 10, 2022