72 Hours to Shift the Lives of the Disabled

An array of promising technologies to help the disabled were on display at the most-recent makeathon hosted by the nonprofit TOM and Makerbot.

There are 1 billion people living with disabilities worldwide, according to the WHO. "That is one in seven people," says Sefi Attias, CTO of the global nonprofit Tikkun Olam Makers (TOM), which has the backing of tech heavyweights Makerbot, Google, Intel, and Autodesk, among others. But many of these people still feel like second-class citizens, often lacking access to technologies that could enable them to perform basic tasks that most people take for granted.

"The problem with [this market] is that it is a super-segmented market not generally served by normal market forces," Attias said at the 72-hour TOM Bay Area Makeathon in San Francisco, which wrapped up on September 13. "And when companies do create products for these people, they are often expensive and not accessible for a lot of people."

A TED for Problem Solving

TOM was founded last year to direct the creative energy of the Maker Movement to address the problems of what it calls "need knowers"--people who either have a disability or know someone who does. "What TED is for inspiration, we want to be for problem solving," Attias said. "We want to create a movement to run these events around the world."

To date, the organization has hosted four competitive makeathons in collaboration with Makerbot--72-hour marathon events, in which makers crank out ideas and prototypes while working closely with those with disabilities.

A panel of judges selects the most promising technologies on the final day, and, after the event, the designs are uploaded to Makerbot's Thingiverse platform, a website that hosts the designs of products ranging from drones to prosthetic hands. "From there, the community can improve them, remix them, and come up with new ideas. You are doing a local event here, but you are bringing it to the world with Thingiverse."

About 100 volunteers participated in the recent event in San Francisco, which was hosted in the TechShop--a two-story space that was full with tools, technology, and 3-D printers.

One example of a project from the most recent event was a grasping device designed to help an armless woman move objects. "At home, I use mouth sticks to hit light switches and to push buttons on the remote control and telephones and stuff like that. I also have a longer one for bringing things closer to me," Kim Lathrop (pictured above) recounted. But I have never had one that grabbed things to help me pick up a plate or to move a telephone to move it to another table."

The team had the idea to come up with a custom mouth stick with a reliable claw that made it possible for her to pick up objects. As of about 11:00 a.m. yesterday, the group was working on the second version of the device. To fit the device for the user's mouth, they used a takeout container as a bite plate and then made sure the part designed to go in the mouth fit within the allotted space.

They initially began working on a design that was closed in the resting position and would open when clenched with the jaws, but that design proved to be bulky and somewhat hard to control. They were happy, however, with the second version, which when squeezed with the jaws, grabs ahold of an object. The design required relatively few moving parts to be in the part of the device that fits in the mouth, and only required about a centimeter of travel to grab ahold of an object.

This new mechanism only needs about a centimeter of travel to work, so it had a lot less moving parts in the mouth than the first iteration. 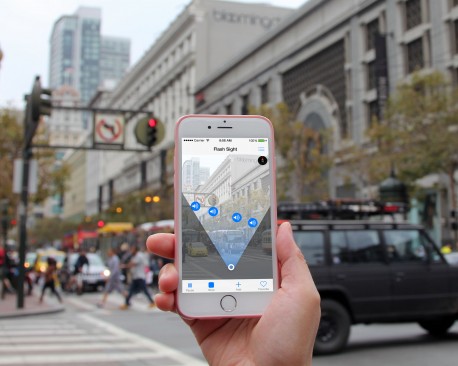 Another project spotted at the event was the FlashSight, an iPhone app that can convey information about the real-world environment to the blind.

The developers are working on creating the app, which will be freely available to the visually impaired. The app will take advantage of sensors and connectivity already bundled into the phone while integrating concepts from psychoacoustics research.

The app could enable users to submit notes into the system, for instance flagging that there is a low-hanging tree branch at a certain location. That information can also be shared with others, helping  visually impaired people in the area from inadvertently bumping into that branch by warning them that they are near it.

One of the developers of the technology is Joshua Miele, a Berkeley, CA-based scientist who was blinded by a chemical burn at the age of four and went on to become the inventor of a number of devices to help the visually impaired. Projects he has helped develop include a talking tactile pen and a virtual wireless Braille keyboard.