Will Medtronic Emerge from the Pandemic Even Stronger? 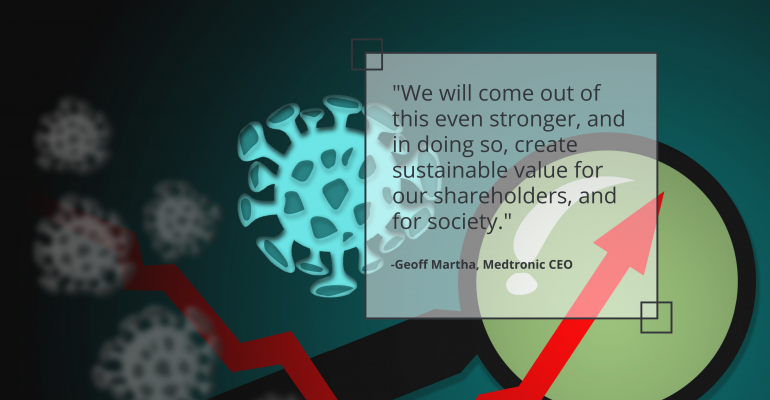 COVID-19 took a heavy toll on Medtronic's most recent fiscal quarter, but given the company's strong pipeline and balance sheet, the company could emerge from the pandemic stronger than ever.

As MD+DI reported in April, Medtronic was already bracing for its fiscal fourth quarter to reflect significant revenue declines, thanks to COVID-19.  But CEO Geoff Martha said the company is focused on emerging from this pandemic even stronger. He even hinted that we could see more tuck-in acquisitions going forward, as the current environment does make it a good time for M&A.

Given the progression of COVID-19 around the world and the timing of the company’s fiscal quarter, Medtronic’s fourth quarter includes an additional month of impact compared to companies that operate on a calendar-based fiscal year.

"So now, as the world begins to recover, we're focused on emerging from this pandemic even stronger," Martha said during the company's fiscal fourth quarter earnings call this week, which also happened to be his first earnings call as CEO. "We're executing strategies and supporting investments that others in our industry, who are in a different financial position, have been unable to make. We're harnessing new partnerships, cutting through the bureaucracy, and operating at a high sense of urgency and speed. We're also sharpening our competitive edge to drive an even higher level of performance."

On April 27, Martha took over for Omar Ishrak, who served as Medtronic's CEO since June 2011 and led the company through some major milestones.

Martha said that, for competitive reasons, he would not provide details of all of the actions that Medtronic is taking during this time. But taking the company's already strong pipeline and balance sheet into consideration, it wasn't hard for analysts on the call to believe him when he said Medtronic would come out of the pandemic even stronger.

"It's something we've heard a lot of CEOs mention over the past quarter earnings here," Robbie Marcus, a medtech analyst at JP Morgan, told Martha during the question-and-answer portion of the call. "But Medtronic is actually doing stuff. You're paying employees ...  you’re paying bonuses. To me, it seems like you're actually building culture during a really difficult time here. But maybe, just give me your thoughts on why that's not just lip service, but something that will actually materialize Medtronic coming out of this pandemic?"

Medtronic CEO: Innovation and commercialization is still a people game

First, Martha said, having a strong balance sheet does make a huge difference and allows the company to lead into this whole crisis and play offense.

"And the actions that we took during the crisis, right, ... to support our employees through benefits programs and protecting our reps’ incentive compensation ... protecting their health, but also reducing anxiety during this time. That makes a big difference," Martha said. "... Because after all, innovation and commercialization is still a people game."

That applies to customers as well, he said.

"And we spent a lot of time, I mentioned in the commentary, with our customers, and it was a different dialogue," Martha said. "It wasn't just selling our therapies and their features, which are great, but it was really, how can we help them through this pandemic? And how can we help them come out the other side?"

It's the difference between making the customer see you as a partner, rather than just another vendor.

Martha said Medtronic has been developing several programs and while he declined to offer details about them, he said they do provide a competitive advantage for the company. "Things around patient confidence, protecting healthcare workers, hospital productivity, these are things we're putting in place with our larger partners in particular, but we think we've scaled these to even smaller hospitals, and it's really building momentum," he said.

Medtronic still has the strongest pipeline in company history

Then there's Medtronic's pipeline. As MD+DI reported on in-depth last year, Medtronic's current pipeline is the strongest in the company's history.

Martha called out a few recent approvals and anticipated products in the pipeline including products MD+DI has recently covered such as the Micra, the Cobalt and Crome, Percept PC, and the InterStim Micro.

"So, there’s wave of products hitting the market at a great time," Martha said. "And then specifically though, how these products are positioned during this pandemic, the whole remote programming, remote monitoring capabilities that before were important but now are like critical, right? And I'm listening to hospitals talk about making this standard-of-care. And in fact, if and I'd say when that happens ... we're in a best position in the marketplace for that. And then secondarily, they are hyper-focused on complications, because they don't want patients coming back. And we're very well positioned there as well with things like Micra and TYRX, and I can go on."

Medtronic has its eye on the pie ... and on M&A

When "the pie" returns to normal size in medtech, Medtronic anticipates having itself a pretty big slice.

"If we don't have a bigger slice of that pie, I'm going to be disappointed," Martha said.

JP Morgan's Marcus said Medtronic currently has the best balance sheet that it's had in about five years, and with asset prices down 20% across the board, the analyst also asked Martha if Medtronic expects to do more M&A soon.

"The short answer is, yes. I think it is a good time to do M&A, as you mentioned, asset prices are down," Martha said. "It doesn't mean that we lower our standards. I just think, again, we can play offense. And I think our focus remains the same on tuck-ins."

The company's new CEO added that he is partial to tuck-in acquisitions that are more meaningful and can actually affect the company's long-term growth rate.

"Like I said, we don't buy growth, we grow what we buy," Martha said. "... There are some are some opportunities that, at least I felt personally, were out of our reach, too expensive before this, and now [are] kind of more in line with what we think are reasonable returns for those investments."