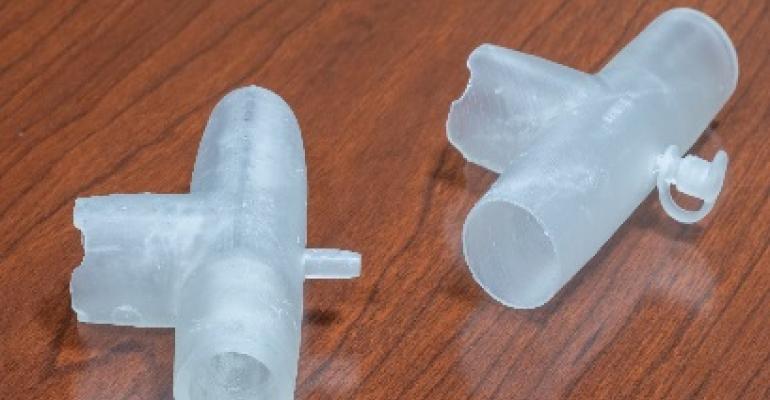 Northwell Health clinicians and engineers created a 3-D printed T-adapter compatible with the Philips Respironic V60 BiPAP machine to convert the machines to invasive ventilators should they be needed to treat critically ill COVID-19 patients. The Northwell team created the adapters in response to supply chain shortages caused by the pandemic.Photo courtesy Northwell Health
United States Senators Christopher Murphy and Kamala Harris were thinking along the same track late in the first week of April regarding supplies needed during the COVID-19 pandemic.

U. S. Senators Christopher Murphy (D-CT) and Kamala Harris (D-CA) have written to Vice President Mike Pence, demanding information about the quantity of supplies in the Strategic National Stockpile and the process by which those supplies are allocated as the nation fights the COVID-19 pandemic.

"Hospital administrators, mayors, governors, and members of Congress, myself included, have been begging your administration for months to establish a centralized acquisition process," Murphy wrote Pence. "Efforts now must focus critical resources to areas of our country experiencing the greatest increase in COVID-19 cases with the largest capacity shortfalls. But without any explanation of the means by which the federal government is determining which states get what supplies, doctors, nurses, medical providers, and the general public are left in the dark to speculate about the political motivations behind them."

“Now that FEMA has assumed responsibility for coordination of the federal response to the COVID-19 pandemic, including oversight of the depleted SNS and securing and allocating badly-needed supplies from manufacturers and abroad, Congress and the American people need to know how decisions are made and prioritized,” she wrote.

A member of Murphy's staff said that as of April 10, they had received no response to the request.

One of the most crucial pieces of equipment health systems are clamoring for is mechanical ventilation technology. Yet the federal government is not the only entity maintaining secrecy on exactly how many ventilators are available at any given time. While many health systems have had to improvise repairs on ventilators they receive from the stockpile and figure out ways to modify other respiratory equipment such as anesthesia and BiPAP machines, few disclose how much ventilation capacity they have.

In Waterbury, CT, for example, a spokesperson for St. Mary's Hospital said only that the hospital “is keenly aware of the global shortage of supplies, and we continue to urge local, state, and federal governments to continue to make related stockpiles available. St. Mary’s, along with our other regional hospitals, also continue to work closely with suppliers to meet this challenge. Like many other local healthcare institutions, we are adjusting as the situation evolves. For more specific information regarding the Strategic National Stockpile, please contact the governor’s office."

Lamont has, however, offered occasional updates on the approximate number of ventilators within Connecticut at his daily press conferences, as well as the number received from the stockpile. He has also repeatedly stressed that, though the number of cases within the state's borders pales in comparison to those in New York City, the U.S. epicenter of the pandemic, that the New York metropolitan area encompasses southern Connecticut as well as northern New Jersey, and that the entire region should be considered a single "hot spot" for logistics planning.

Lamont said Connecticut received 50 ventilators from the federal stockpile to bring the state's total to slightly more than 1,000. He estimated the state may need 4,000 at the outbreak's peak in the state.

"We're working every day to see if we can get more ventilators," he said during his April 3 press conference. In addition to requesting more from the federal stockpile, he also mentioned ongoing talks with a ventilator manufacturer in Connecticut to ascertain if production could be ramped up. He also said the ventilators may be able to be moved from system to system as the peak fluctuates between southwestern Connecticut, which suffered heavy numbers of COVID-19 cases nearly in concert with nearby New York, and less densely populated regions of the state, where the peak is expected later and to be less severe.

Lamont said he had been in discussions with John Murphy, MD, CEO of Nuvance Health, which runs seven hospitals in suburban New York and western Connecticut, who told him about the possibilities of using high-flow oxygen therapy instead of invasive ventilation.

"So we're going to stretch our use of ventilators the best we can," Lamont said.

A Nuvance spokesman said he had received no response to a query regarding how many ventilators the system had available nor how many it had received from the national stockpile.

While another metro area system, New Hyde Park, NY-based Northwell Health, did not disclose its total number of ventilators, spokesman Terry Lynam said the system had received about 250 from the national stockpile and an additional 200 from FEMA the first week of April. He said about 200 of the stockpile-supplied ventilators lacked air hoses, "so we had to make arrangements to order and install them."

Northwell clinicians and bio-engineers are also among those creating parts that allow non-ventilators to be adapted for that purpose, in Northwell's case, the system's existing stock of Philips Respironic V60 BiPAP machines. The Northwell team figured out a way to produce via 3-D printing a replica of the machine's T-adapter. The adapter allows the end of the BiPAP circuit to be connected to the endotracheal tube as well as the addition of two HEPA filters. The HEPA filters are put in place to help stop the virus spread as the traditional BiPAP machine exhausted gases into the environment.

Once a BiPAP machine is configured as a ventilator, it becomes an invasive ventilator machine to be used to intubate a patient.

"BiPAP machines are devices that many pulmonary and internal medicine physicians also have experience in using," said Hugh Cassiere, MD, medical director of respiratory care services at the system's North Shore University Hospital. "Also, the menu options required to set up Philips Respironics V60 BiPAP machine with the pressure control option as an invasive ventilator are intuitive to the average respiratory therapist who would help assist the practitioner as they already do when setting up an invasive ventilator."

Northwell Health will share the new protocols to convert the BiPAP machine as well as share the T-adapter print design online.

The lack of transparency on ventilator supplies is being counterbalanced somewhat by a model created by researchers at the Massachusetts Institute of Technology led by associate dean of business analytics Dimitris Bertsimis, in collaboration with Hartford Healthcare in Connecticut and the Italian health system ASST Cremona. That model suggests that efficiently planned interstate transfers can mitigate ventilator shortages in "hot spots."

”Our estimate is that overall the country has enough ventilators, but specific states at specific times might not," Bertsimis said in a conference call April 10 with Hartford Healthcare executives. "So a more intelligent reallocation may actually save lives.”