HomeCOVID-19The Personal Toll of Working Around the Clock at the Onset of a Global Pandemic
Recent
A New Medtech IPO Could Be on the Way
Sep 27, 2021
The European Commission Isn’t Happy with Illumina
Sep 27, 2021
Medtech in a Minute: Axonics Refuses to Be Intimidated By Medtronic, and More
Sep 27, 2021
What Is Driving Next-Gen Remote Patient Monitoring?
Sep 26, 2021 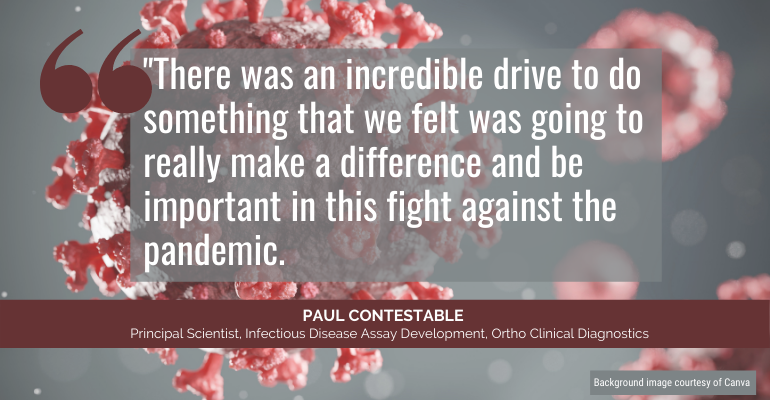 Paul Contestable, a principal scientist at Ortho Clinical Diagnostics, shares what it was like to develop a COVID-19 antibody test in a matter of weeks — something that ordinarily would have taken years — as the virus quickly turned into a global nightmare.

Over the course of Paul Contestable's 36-year career in infectious disease assay development he always knew his organization had the capability to react quickly in the event of a pandemic, though he never wished to put that theory to the test.

There have been a couple of close calls — like the West Nile virus in 1999, and the Zika virus in 2016 — but those outbreaks pale in comparison to COVID-19.

Contestable, the principal scientist of infectious disease assay development at Ortho Clinical Diagnostics, opened up to MD+DI recently about what it was like behind the scenes as his team worked tirelessly to develop a COVID-19 antibody test in a matter of weeks as the SARS-CoV-2 virus quickly became a global nightmare.

"Our leadership very quickly give us what we needed to get started and to do our part," Contestable said.

Initially the fight against the disease caused by the virus was all molecular and focused on real-time polymerase chain reaction (PCR) diagnostics because of the sensitivity of PCR diagnostics so Contestable's team wasn't sure if Ortho would have a role to play in the fight or not, he said. However, as they began talking to key opinion leaders it soon became apparent that Ortho did indeed have a fairly big part to play because molecular testing wasn't going to be able to keep up with the demand given the short window during which PCR diagnostics can best detect the virus. That's when the need for antibody detection became part of the COVID-19 conversation.

"In early March, our leadership gave us the tools we needed to get started and by the first week in April we had our first test out," Contestable said.

As MD+DI reported at the time, the Raritan, NJ-based company received emergency use authorization (EUA) from FDA for the Vitros Immunodiagnostic Products Anti-SARS-CoV-2 Total Reagent Pack and Calibrators. Ortho used to be part of Johnson & Johnson, but J&J sold the business in 2014 to the Carlyle Group.

Under normal circumstances, Contestable said it would take at least three years to develop a new assay from scratch like that and bring it to market through FDA. The agency's use of the emergency use authorization pathway certainly helped expedite the process, he acknowledged.

"And then we started manufacturing here in R&D to save the whole time of transferring to our large-scale manufacturing facility," Contestable said. "So quite a few people and functions came into play to be able to do something in a matter of weeks instead of years, it wasn't just us here in R&D, it was really a full team effort."

Knowing when to take risks

Contestable also credited Ortho's leadership for providing the resources necessary and being willing to take risks in order to successfully complete the development in as little time as possible.

"There's a lot of risk taking that has to be made. It's a calculated risk, but still you know you're taking risks ... for example, we had to buy many millions of dollars' worth of raw materials without even knowing for sure they were going to work. And having very limited data to base major decisions on is very stressful, so there were a lot of eyes watching what we were doing because it was so important."

The stress level during that time was about as high as Contestable has ever experienced in his 36 years with the company. But his team had a lot of support as well, both in and out of the lab.

"We have a relatively small team here that was working on this initially, but the family situations are all different," Contestable said. "For me, it's just me and my cats and they were not very happy … and I know it’s silly talking about cats, but they don't go outside ever, and one night when I came home one of them must've darted out. So in the middle of all this stress I had a cat missing for about four weeks. So when I was home, I would sleep for a couple hours and then get up and go look for the cat …"

But the people on his team with young kids probably had the hardest time with it, Contestable said.

"The families were all very supportive, but the young kids are used to having a parent home to put them to bed on certain nights and they weren’t home for weeks on end … so there were some phone calls with tears from young kids, and then I saw tears in the parents' [eyes] too, and that gets to you after a while," he said. "And the little kids, they don't understand, you know. The spouses who had to deal with making dinner and eating dinner on their own, they handled it better."

Contestable recalled that there was a lot of poor eating habits on the team's part as there was no time for exercise and most of their meals consisted of subs and pizza and whatever else they could get delivered to the building.

"I can speak for myself, I put on about 20 pounds ... your whole lifestyle changes," he said. "It was tough, but we knew we were doing something really special too."

Despite the challenges, Contestable says his team never once complained about the long hours or the time away from home.

"There was an incredible drive to do something that we felt was going to really make a difference and be important in this fight against the pandemic," he said.

When asked what kept him and his team going through such a challenging and stressful time, Contestable didn't miss a beat.

"It was adrenalin," he said, and then chuckled. "It really was, because we were pretty fired up about all of it."

It also helped to be able to see an immediate payoff in terms of the difference that the antibody test made on a national scale.

"Our first assay enabled a huge CDC seroprevalence study to be started in March. They were testing samples from March when we launched in April and they were able to see across a cross-section of the country how this disease was spreading. "To see them using our test right away for something important like that — you know that study has just expanded over the past year and is still going on with our assays — and to see how that information was helping and being used, that just kept the adrenaline going while we kept working on additional claims, and additional assays, and additional tools to use in this fight against the pandemic."

He recalled times when they would get a result at 8 p.m. and he'd say, "Gee, it would be really nice if we could do one more test tonight," but there was never so much as a groan, Contestable said. In fact, he added, sometimes it was one of his team members who would speak up and say something like, "Why don't we just do it tonight?"

When his team did go home and turned on the news, they were able to keep what they were doing in perspective on a grander scale, he said.

"We were seeing stories about people on the frontlines working in the hospitals. They were working as long or longer hours than we were, but they were risking their lives as well ... That's a stress we didn't have to deal with ... they were the people making the real sacrifices."

Now, a year after the company brought that first COVID-19 antibody test to the market, Contestable said he's more confident than ever that if something like COVID-19 were to happen again Ortho Clinical Diagnostics is well positioned to make an impact very quickly if needed.

"We have a saying here, 'one Ortho,' and this is a real true example of what one Ortho means because I've got a fairly small team but the supporting cast around the company, everybody did their part, and everybody enabled this to be successful," he said. "So it was a really great opportunity for us to show what we can do as one Ortho when we all pull in the same direction."