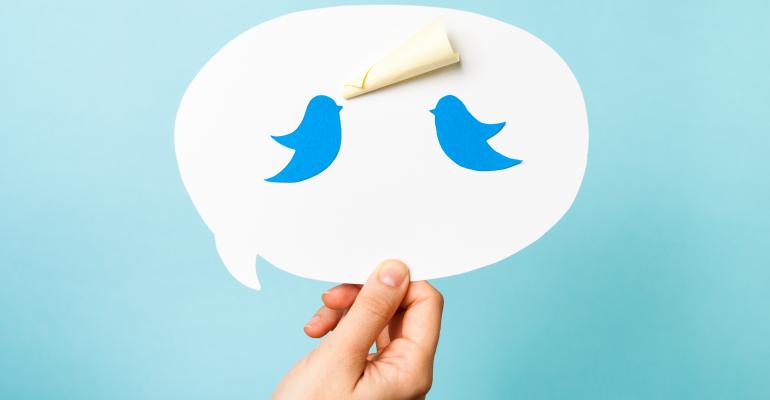 If you only read one book on the pandemic, this one should probably be it, according to our Twitter news feed.

The amount of buzz that Former FDA Commissioner Scott Gottlieb's new book generated Tuesday is the kind of release-day buzz most authors only dream of.

Actually, the hype around the book, "Uncontrolled Spread: Why COVID-19 Crushed Us and How We Can Defeat the Next Pandemic," is kind of ridiculous if you ask me, but kudos to Gottlieb on what is sure to be a successful book launch. I wouldn't be at all surprised to see it land on the coveted New York Times Best Sellers.

These tweets, for example, are just a few of the Twitter notifications buzzing my phone all day Tuesday and into Wednesday: 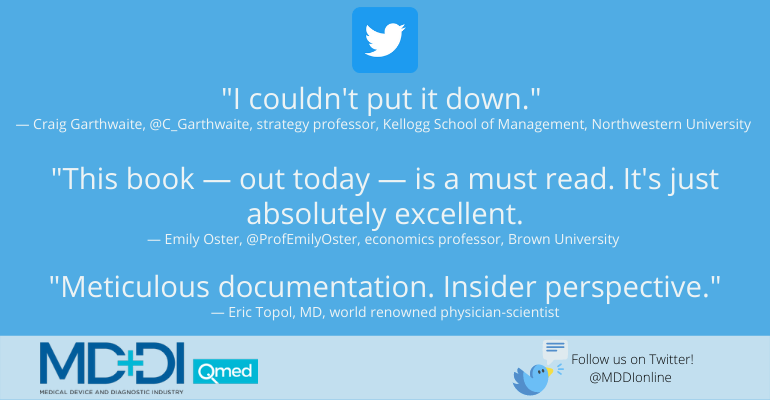 And the praise went on and on until MD+DI's Twitter notifications had me screaming at my phone: Fine! I'll buy Gottlieb's new book.

Learning from major mistakes for far better pandemic preparedness, this book goes deep into what went wrong, especially at CDC, and so much we need to do to get ready for the inevitable next one. Meticulous documentation. Insider perspective. Big congrats @ScottGottliebMD https://t.co/9v9ekWQEJC

Will "Uncontrolled Spread" live up to all the hype? That's a question I'll have to answer after I read it (just ordered my copy today). I have, however, read enough reviews, listened to enough podcast interviews, and followed enough of Gottlieb's weekly appearances on "Face the Nation" with Margaret Brennan on CBS News that I feel like I have a pretty good idea of what to expect. Based on that research, here are four things I've already learned from Gottlieb's many recent book-promotion appearances.

Former FDA commissioner @ScottGottliebMD: "If I had been at FDA...I'm pretty confident that we would have made a very hard pivot to try to instigate the private industry to start getting engaged and developing diagnostic tests early in January." pic.twitter.com/HU7CNah7KT

1. Gottlieb was in New York City during the 9/11 terriorist attacks

According to the extended transcripts of Brennan's most recent "Face the Nation" interview with the former FDA commissioner, Gottlieb's new book actually opens with a personal anecdote about 9/11, which happened while he was a physician resident in New York City. In that interview, Gottlieb recalls being assigned to a triage center the day of the terrorist attacks on the former World Trade Centers.

"...it was a cavernous field house and they had set up, at some point over the course of the day, basically the equivalent of hundreds of hospital beds, but not just staffed hospital beds, but these were surgical beds. They had advanced medical equipment in hundreds of stations. ...It was like nothing I've ever seen before or since," Gottlieb told Brennan. "So somewhere, you know, around New York City, someone had made a decision that New York needed to be prepared for a mass casualty event, and they had mothballed all the equipment that would be needed to do it, to handle it. And they had mothballed the logistics to set it up within hours. And the reason I told that story was because nothing equivalent really existed here."

When COVID-19 hit, there was an illusion among the nation's top health officials that the country was prepared for a panedmic, and that the federal government had taken certain measures in the event of a pandemic, Gottlieb continued. Unfortunately, an illusion isn't enough.

Gottlieb reasoned that the nation's leaders simply didn't have the foresight to understand that a virus could threaten the United States in the way that it did.

"We had planned for a pandemic flu. I had been part of some of that planning back in 2003 and 2005 when I was at FDA ... but we didn't really understand how the planning that we had engaged in for influenza wouldn't be applicable to a coronavirus," he told Brennan.

2. The global supply chain broke, but we should have had a domestic back-up plan

The fact that Gottlieb's new book covers the giant cluster of a global supply chain that the medical device industry encountered early on in the pandemic is yet another reason I'm looking forward to reading it. After all, my MD+DI colleagues and I have spent a lot of time covering how the global supply chain problems had on things like COVID-19 testing.

What we needed, he said during the interview, was a completly different mindset, one that allowed for domestic production when the global supply chain failed us.

But that, according to Gottlieb's new book, is why the United States couldn't scale COVID-19 testing fast enough.

I do appreciate a writer who doesn't pull punches, and if his interviews are any indication, Gottlieb's new book will not dissappoint in that regard.

"We're not going to wait six weeks or two months to start manufacturing the diagnostic tests [next time]. I think next time, you know, we're going to be more apt to do too much and not too little when something emerges," he said.

But we still have to fix the infrastructure problem before the next inevitable pademic.

"...I don't know that we're any better in terms of our ability to actually mobilize the sort of manufacturing and the distribution capacity that we're going to need," Gottlieb said. "We don't have the infrastructure to do that."

Gottlieb's new book is not about President Donald Trump's leadership, the author has repeatedly said in conversations with the press. But he is quite critical of certain glaring shortcomings, such as the Trump administration's lack of support for public health officials and agencies.

Let's not put all our eggs in the CDC basket either though, the former FDA commissioner warns.

"I mean, there was a perception early on in this crisi that the CDC would have the capacity to develop a diagnostic test, and deploy it, and gather the data that we would need, and do the analytics to try to scope out what the contours of the response would be, and they would be able to deploy the diagnostic test, and deploy the vaccine, and stand up this infrastructure."

But it turns out, that's simply expecting too much from the Centers for Disease Control and Prevention (CDC).

"They're not a logistical organization," he went on to explain. "CDC has a very retrospective mindset. It's a high-science organization that does deep analytical analysis of data that's oftentimes out of sync to when the decisions need to get made."

The CDC isn't the fictional "Avengers," after all. Nor is it the Joint Special Operations Command, Gottlieb said.

"[The CDC would] rather take the data, analyze it for four months, and publish it in the Morbidity and Mortality Weekly Report," he said. "And the idea that they were going to be able to mass manufacture a diagnostic test and forward deploy it ... they contaminated their own test. ...They botched the manufacture of their test."

But even if everything had gone perfectly at the CDC, the United States would only be doing 10,000 tests a day at a time when the demand was hundreds of thousands of tests a day. Gottlieb's new book suggests the federal government should have turned to the diagnostic industry early on and urged the private sector to start mass producing COVID-19 tests. As it happened, FDA didn't authorize the first commercial test for the virus until March 12, 2020, according to MD+DI's timeline. And that one, as we learned exactly one year later, wasn't perfect (not that any diagnostic test is ever perfect).

The answer was never one or the other. Gottlieb's new book describes more of an "all-of-the-above approach" with public labs, clinical labs inside hospitals, and private manufacturers all developing test kits for commercial labs. And all of that needed to happen in January 2020, he said in his interview with Brennan.

"But CDC had the ball. CDC was following their standard blueprint. ...It was quasi sufficient in the setting of Zika, which was a slower-moving infection. But in a fast-moving epidemic like this, it was unmatched. And, you know, in fairness to CDC, there were a lot of policymakers who assumed that they would be able to complete this mission and wrongly assumed what their capabilities were," the former commissioner said. "Now, CDC should have raised their hand and said, 'we really don't have this'."

4. We played the lockdown card too soon.

Hindsight is always 20/20, as the cliche goes, but one surprising takeaway from Gottlieb's pre-launch interviews is that the general attitude in the Deep South might have been different, if only COVID-19 tests had been available/accessible sooner.

Diagnostic testing would have limited the strictest lockdown measures to the regions where the virus was pervasive. Instead, a lack of testing ultimatly led to a 45-day shutdown of all non-essential businesses and services across the country. So by the time states like Georgia and Florida actually needed to mitigate the risk, they were just over it.

"...When the virus eventually traveled to the Deep South, people down there said, 'You know what? We're not shutting down now. You told us to do it in the spring and we did, we didn't have to. We're done with shutdowns.' ... We could have substantially delayed that, and we could have preserved the political capital in places where the virus wasn't so that when it got there, they would have still been willing to take the tough decisions to close bars, close restaurants, do all the things that we knew were going to control spread and buy us time until we got to a vaccine," Gottlieb told Brennan during their recent interview. "But we basically spent that card right up front."