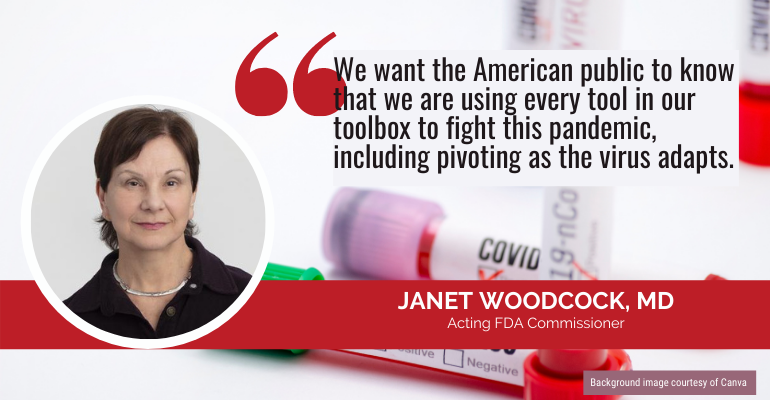 FDA issued a new suite of guidances for developers of COVID-19 tests, vaccines, and therapeutics to address variants of the virus.

On the heels of an acknowledging flaws in its initial COVID-19 antibody testing guidance, FDA issued new guidances to address variants of the SARS-CoV-2 virus. The new guidances are for developers of COVID-19 tests, vaccines, and therapeutics.

“The FDA is committed to identifying efficient ways to modify medical products that either are in the pipeline or have been authorized for emergency use to address emerging variants,” said Acting FDA Commissioner Janet Woodcock, MD. “We know the country is eager to return to a new normal and the emergence of the virus variants raises new concerns about the performance of these products. By issuing these guidances, we want the American public to know that we are using every tool in our toolbox to fight this pandemic, including pivoting as the virus adapts. We need to arm healthcare providers with the best available diagnostics, therapeutics, and vaccines to fight this virus. We remain committed to getting these life-saving products to the frontlines.”

FDA said it has anticipated the possible emergence of SARS-CoV-2 variants and has already been prepared to address changes in the virus, informed by the agency’s experience with evolving infectious diseases, such as influenza and HIV. The guidances were published in the spirit of transparency, FDA noted, because the agency has already been communicating with product developers to provide information and scientific advice as they evaluate the impact of SARS-CoV-2 variants on their products. The agency said it also encourages public input on the topic.

FDA issued a new guidance for test developers, Policy for Evaluating Impact of Viral Mutations on COVID-19 Tests. The guidance provides information on evaluating the potential impact of emerging and future viral genetic mutations, which may be the basis of viral variants, on COVID-19 tests, including design considerations and ongoing monitoring. The agency has also issued a safety alert to caution that the presence of viral genetic mutations in a patient sample can potentially change the performance of a diagnostic test. FDA said it identified a few tests that are known to be impacted by emerging viral mutations, though at this time the impact does not appear to be significant.

The clinical impact of viral genetic mutations on a test’s performance is influenced by various factors, such as the sequence of the variant, the design of test (for example, molecular tests designed to detect multiple SARS-CoV-2 genetic targets are less susceptible to the effects of genetic variation than tests designed to detect a single genetic target), and the prevalence of the variant in the patient population.

The latest guidance describes the agency's activities to better understand the public health impact of new virus variants and the impact on test performance, such as monitoring publicly available genomic databases for emerging SARS-CoV-2 genetic mutations and monitoring the potential effects of genetic variation on molecular tests that have been issued an emergency use authorization. The guidance also provides recommendations to test developers, such as considering the potential for future viral genetic mutations when designing their test, and conducting their own routine monitoring to evaluate the potential impact of new and emerging viral genetic mutations, which may be the basis of viral variants, on the performance for molecular, antigen, and serology SARS-CoV-2 tests.