HomeProduct DevelopmentComponentsThere's a New Superhero in Town
Recent
Product Development
Has Medtech Shifted to a Seller's Strike?
May 20, 2022
Medtech in a Minute: The Industry Loses a Legend, and More
May 20, 2022
NeuroOne’s Bid for Long-term Use of Evo sEEG Shot Down by FDA
May 20, 2022
Minnetronix Improves Image Quality with Surgical Camera and Other Supplier News
May 19, 2022 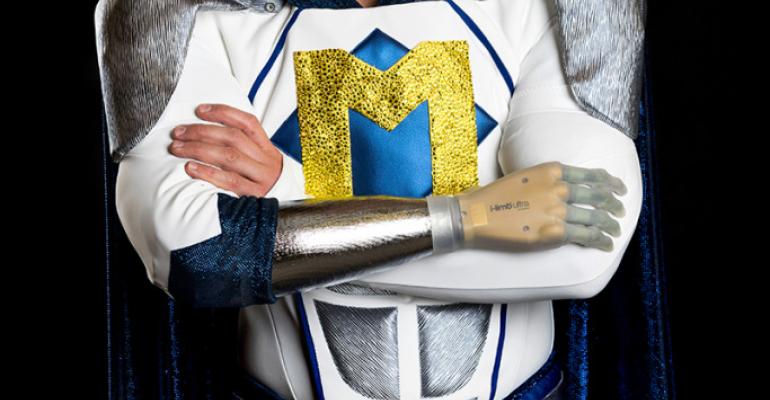 Michel Fornasier is an ambassador of the Cybathlon, an event in which people with physical disabilities compete against each other in obstacle races—supported by state-of-the-art technical assistance systems.
Michel Fornasier, also known as Bionicman, uses his prosthetic hand to give children with disabilities more confidence—and cool, 3D-printed hands.

When children used to ask Michel Fornasier if his prosthetic hand gave him superpowers, he denied the question. Later on he began to say, "Who knows?"

And that's how Bionicman was born.

Fornasier, who was born without a right hand, contacted comic-book artist David Boller and together they created the first stories about Bionicman, who comes to people’s aid in various situations. The first comic anthology is out now. A second volume is planned for late 2019. Physical handicaps play a role in many stories.

“What I want to do is to point out in a playful way that there are people with disabilities, and that they would like to be treated just like anyone else," Fornasier said.

“This prosthesis has made my life much easier in many respects, even though it can replace only 15% of the human hand’s functions," he said. "I can use it to ride a bicycle or scooter and am able to type on a keyboard using both hands. Also, simply being able to hold a smartphone in my right hand feels great.”

Fornasier's mission is to strengthen the confidence of children and show them that having a physical disability does not make them better or worse than other children. In the comics, Bionicman fights for tolerance and against mobbing.

Click here to read more about Fornasier and his role as an ambassador of the Cybathlon.