Home>Product Development>Components
Recent
AWT Labels & Packaging Adds New Mark Andy P Series Press and More Supplier News
May 07, 2021
These Digital Health and Medtech Companies Are Changing the Game in Maternal Health
May 07, 2021
Medical Device Design: Join Us for a Day of Inspiration
May 07, 2021
A New Contender in the Diabetes Market
May 06, 2021

TEDMED Update: Why the Future of Medical Electronics Is Flexible

The fact that electronics become less expensive and more powerful over time has been thoroughly ingrained in our minds. We take it as a matter of fact that technological devices generally get more powerful and less expensive over time. And, over the years, it has become apparent that electronic devices can radically change countless facets of our lives—from picking out music to finding out how to get from point A to B.

We take it as a matter of fact that technological devices generally get more powerful and less expensive over time. And, over the years, it has become apparent that electronic devices can radically change countless facets of our lives—from picking out music to finding out how to get from point A to B.

But even the latest electronic devices are essentially “smaller versions of the rigid bricks they have always been,” said David Icke, CEO of conformal electronics maker MC10, speaking at TEDMED on April 11 in Washington, DC. “They are solid, boxy, and often uncomfortable to use.” 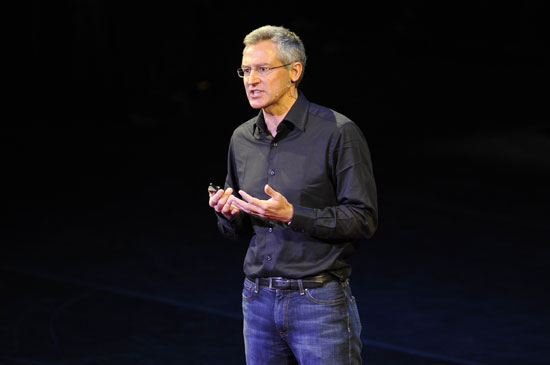 These drawbacks also apply to medical electronics, Icke pointed out. Home-monitoring devices can be cumbersome to lug around. And, in the hospital, electronic devices require that patients be tethered to them with wires and sensors.

A more graphic example can be found in the case of epileptics whose seizures are not controlled by drugs. One method of treating these patients is to connect the brain directly to computers, which monitor the the patients to identify the source of their seizures. To accomplish that, doctors saw open the cranium and manually connect electrodes to the brain’s surface. They then keep the patients in the hospital for roughly one week to ten days to monitor their brains.

“There has to be a better way,” Icke said. Flexible electronics capable of monitoring the brain could be placed through a narrow burr hole in the skull. From there, they could expand like a parachute, eventually settling on the surface of the brain. This approach would not only be less traumatic but more effective as well.

Icke mentioned a whole host of other medical and health applications for flexible electronics. Patches with flexible sensors could be used to monitor everyone from infants to athletes. In addition, flexible sensors could provide the foundation for a human–computer interface that links prosthetics directly to the brain.

The sensors could be a boon for the field of cardiology as well. To monitor heart patients, an implantable version of such a patch could be deployed through the femoral artery through the vasculature to be placed in the beating heart. Data from the sensor could be relayed wirelessly to smart phones.

The technology could be used in smart catheters to give physicians a better understanding of “what is happening at the far end of the catheter.” Doing so can be used to improve the placement of stents and artificial heart valves.

Icke’s company, MC10, will begin shipping its first consumer products this year for sports monitoring. Skin-mounted wellness and health products will follow thereafter. The company will introduce medical applications of the bendable electronics after that. Icke expressed interest in working with “partners in the medical device space that have that expertise in going through the regulatory process as fast as they can.”