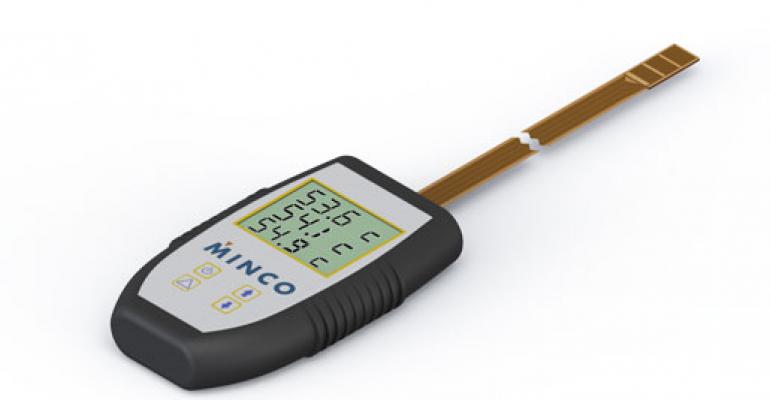 Sensors are an important component of respiratory and diagnostic equipment and may help improve device performance.

Minco's Three Channel is a validation system for diagnostics equipment, allowing the operator to determine whether the diagnostic is functioning properly.

When medical devices need to determine when to cease or continue a function, or to perhaps to move on to another function, sensors step up to the task. Pressure sensors measure the pressure of gasses or fluids, responding with a signal that can adjust the administration of medication in a drug-delivery device or adjust the concentration of oxygen in an oxygen concentrator. Temperature sensors employed in medical diagnostics ensure that a specimen or sample is at the right temperature before it moves on to the next step in the cycle.

Mai says that besides cost, medical device companies are usually concerned with finding pressure sensors that offer high accuracy and repeatability—the ability of the sensor to produce the same output with repeated applications of the same pressure. All Sensors is also seeing more device makers come in with requirements for sensors that can perform in low pressure ranges.

Myers sees medical device makers increasingly seeking sensors that are both smaller and faster, which is consistent with the broader industry trend toward medical devices that are smaller and more portable. While smaller devices can pose challenges to some technologies, a smaller footprint brings the advantage of speed to sensing technology. With a smaller product, there is less mass to heat up or cool down, which means that the device can more quickly respond to the temperature required of the application. “They’re both getting smaller and faster,” Myers says, describing the sensors in devices. “As you get smaller, you get faster just because you have a smaller thermal mass.”

In some cases, a smaller size is not an advantage for temperature sensors. For example, a device that has tubing connected to a patient to administer a fluid drip presents challenges for a temperature-gauging sensors. To make temperature sensing as fast as possible, the sensor has to be in the fluid—a sensor outside the tubing may not be fast enough, Myers says. While placing a sensor in the fluid yields a faster response, the device design must then take into account the potential contamination or damage to a sensor from being immersed in fluid. Furthermore, the sensor also must not obstruct the fluid’s flow.

Diagnostic devices employing microfluidics also pose challenges to sensor companies. Various companies are developing lab-on-a-chip technologies, where a single drop on a slide is used for diagnostic purposes. Rather than sending a sample back to a lab, all of the testing is done at the point of care within a handheld device. But in cases where the only fluid is a single drop on a slide, the sensor must be in contact with that drop of fluid.

While the shrinking footprint of diagnostics technologies makes the development of handheld devices possible, it also challenges Minco and other sensor suppliers to research ways to make sensors that can work with tiny amounts of fluid. Myers says Minco is researching micro-sensor capabilities and disposable technologies that would allow for sensors to be in direct contact with fluids. “That’s the direction the industry is trying to go, but there’s not really an industry standard solution for that yet,” Myers says.

The form factor of the device, and how the sensor is incorporated into the product, can affect how quickly a sensor responds and performs with the overall system. Minco also takes into account how the sensors are installed and removed, which matters for maintenance of the device. When medical devices start out in research and development, engineers will typically work with standard parts to build the prototype. But as the technology moves toward pre-clinical development, engineers look for ways to customize the design and even improve the device’s performance. At this point, sensor companies can look at the overall device and take different approaches to improve the speed and response of a sensor in the application.

Size isn’t the only factor affecting speed. By locating a sensor closer to the process reaction, the device can more quickly determine that a specimen or sample is at the proper temperature, allowing the device to move on to its next step. Improving the performance of a medical device requires the supplier to look at how the full system will function, and not just looking at the sensor in isolation, Myers explains.

Frank Vinluan is a contributor to MD+DI. Reach him at [email protected].