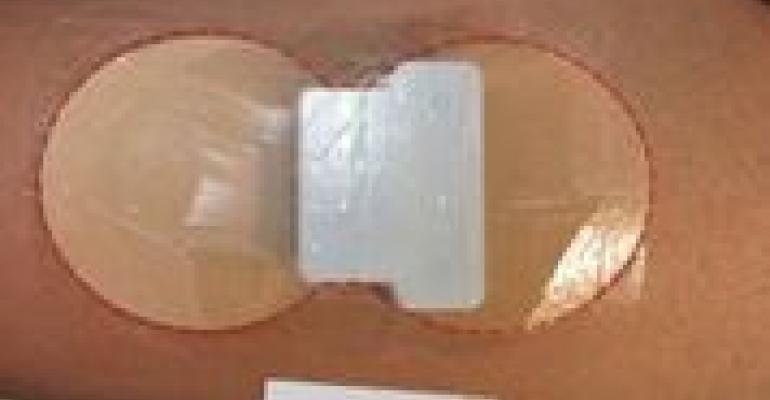 Fe3 Medical completed the first human study of its iontophoretic transdermal technology designed to bypass ionic resistance build up in the skin.

Patch-like wearables are becoming increasingly popular in medtech. The latest device to employ such a design and make medtech headlines is transdermal patch being developed by Fe3 Medical.

San Antonio, TX-based Fe3 said its biphasic iontophoretic transdermal technology is for the treatment of iron deficiency anemia. The firm announced results from its first human study of the patch-like device.

The human study focused on the safety and tolerability of Fe3's iontophoretic transdermal technology designed to bypass ionic resistance build up in the skin. The human study follows a series of successful preclinical studies demonstrating the safe delivery of iron through the skin.

The firm’s technology is designed as an alternative therapy for the millions of patients who suffer from debilitating effects of iron deficiency anemia but cannot tolerate the current oral therapies available.

After mild skin preparation, the Fe3 patch was applied to the thigh of the subject. The patch was programmed for a short hydration interval followed by about five hours of active therapy. The study demonstrated successful iron transport, with a rapid rise in serum iron levels during the first four hours and a decline and return to baseline within 24 hours. Dose-dependent increases in iron transport, consistent with expected transport rates, were also observed.

No adverse effects were experienced by the subjects, including no scarring or long-term staining of the skin. Mild edema or erythema resolved within three days.

"We are focused on bringing a new therapy option to the millions of patients suffering from iron deficiency anemia on a worldwide basis," Mark Sieczkarek, CEO of Fe3 Medical said in a release. "Our first human study, along with our extensive preclinical studies, give us the confidence that our transdermal patch technology can effectively and safely deliver therapeutic levels of iron. We are now preparing for the next exciting phase for Fe3 and an upcoming clinical trial."

A number of medical device companies have or are developing patch solutions and the design isn’t limited to just one disease state.

Biolinq is looking to redefine the continuous glucose monitoring (CGM) monitoring space with its patch-like device. The San Diego-based company’s device is a microarray and has very small protrusions on it. When applied to the skin protrusions only go a fraction of a millimeter deep and allows the device to measure interstitial fluid for glucose levels.

Most recently the private company raised about $15 million total in its series A round.

Medtronic made a significant acquisition in the space in 2014 when it acquired Corventis, the maker of a heart failure monitoring patch. Corventis has developed easy-to-apply, temporary sensors that can detect nonlethal arrhythmia including atrial fibrillation, as well as fluid retention.

Perhaps the most popular and most successful patch like-technology in medtech comes from IRhythm. The company has developed the Zio Patch XT, a wearable technology to monitor heart rate activity for up to 14 days.

The San Francisco-based company raised $106 million in an IPO about three years ago and has received a steady stream of praises from analysts. In 2018, IRhythm made the list of the top 25 medtech companies on the M&A radar.

iRhythm Finds Its Groove at the Intersection of Cardiology and AI
Jan 07, 2019