New millimeter-sized "neural dust" devices use ultrasound for both wireless power and communication. 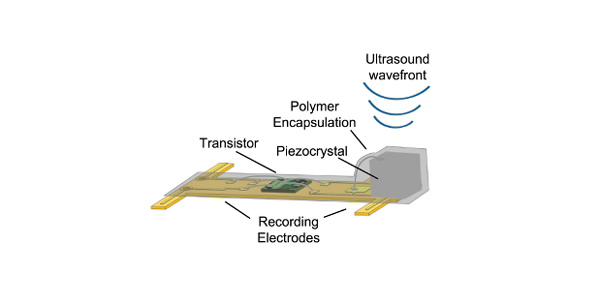 Researchers have developed a wireless device small enough to be implanted in individual nerves, and capable of detecting the electrical activity of nerves and muscles deep within the body, according to DARPA, which funded the work.

The millimeter-scale sensor and external ultrasonic transceiver that powers the implant and communicates with it is called a "neural dust" system. The team, led by the University of California, Berkeley's Department of Electrical Engineering and Computer Sciences, completed the first in vivo tests of this technology in rodents and reported them in the journal Neuron.

The sensor can be implanted into either a nerve or muscle, and consists of  a piezoelectric crystal, a single custom transistor, and a pair of recording electrodes. The system reported both electroneurogram (ENG) recordings from the sciatic nerve and electromyographic (EMG) recordings from the gastrocnemius muscle, according to the journal article.

"Neural dust represents a radical departure from the traditional approach of using radio waves for wireless communication with implanted devices," said Doug Weber, the DARPA program manager for the agency's Electrical Prescriptions (ElectRx)program, in a statement.

ElectRx is focused in part on overcoming the constraints posed by hardwired solutions, which are not feasible for chronic use, and existing wireless solutions that are too large to record activity from small-diameter nerves and record independently from many discrete sites within a nerve bundle. (Find out 10 way the military is boosting medtech.)

The team used ultrasound to communicate with the neural dust because sound waves pass freely through bodily tissues and can be accurately focused at nerve targets deep inside the body, Weber said. The sensors can be made smaller and placed deeper by needle injection or other non-surgical approaches, he added.

Most existing wireless peripheral nervous system sensors use electromagnetic energy in the form of radio waves for coupling and communication. To work at smaller scales, these systems must increase their energy output, and much of that energy gets absorbed by surrounding tissue. Ultrasound, by comparison, is considered safe for use in the human body, and can penetrate deeper into tissue at lower power levels, reducing the risk of adverse effects.

The team's prototype neural dust "motes" measure 0.8 mm by 3 mm by 1 mm, as assembled with commercially available components. The researchers estimate that by using custom parts and processes, they could manufacture individual motes of 1 mm³ or less in size--possibly as small as 100 microns per side. The small size means multiple sensors could be placed near each other to make more precise recordings of nerve activity from many sites within a nerve or group of nerves.

Here's how it works: Pulses of ultrasonic energy emitted by the external board affect the crystal. While some of the pulses are reflected back to the board, others cause the crystal to vibrate. This vibration converts the mechanical power of the ultrasound wave into electrical power, which is supplied to the dust mote's transistor. Meanwhile, any extracellular voltage change across the mote's two recording electrodes--generated by nerve activity--modulates the transistor's gate, which changes the current flowing between the terminals of the crystal.

These changes in current alter the vibration of the crystal and the intensity of its reflected ultrasonic energy. In this way, the shape of the reflected ultrasonic pulses encodes the electrophysiological voltage signal recorded by the implanted electrodes. This signal can be reconstructed externally by electronics attached to the transceiver board to interpret nerve activity.

"One of the most appealing features of the neural dust sensors is that they are completely passive," Weber said. "Because there are no batteries to be changed, there is no need for further surgeries after the initial implant."