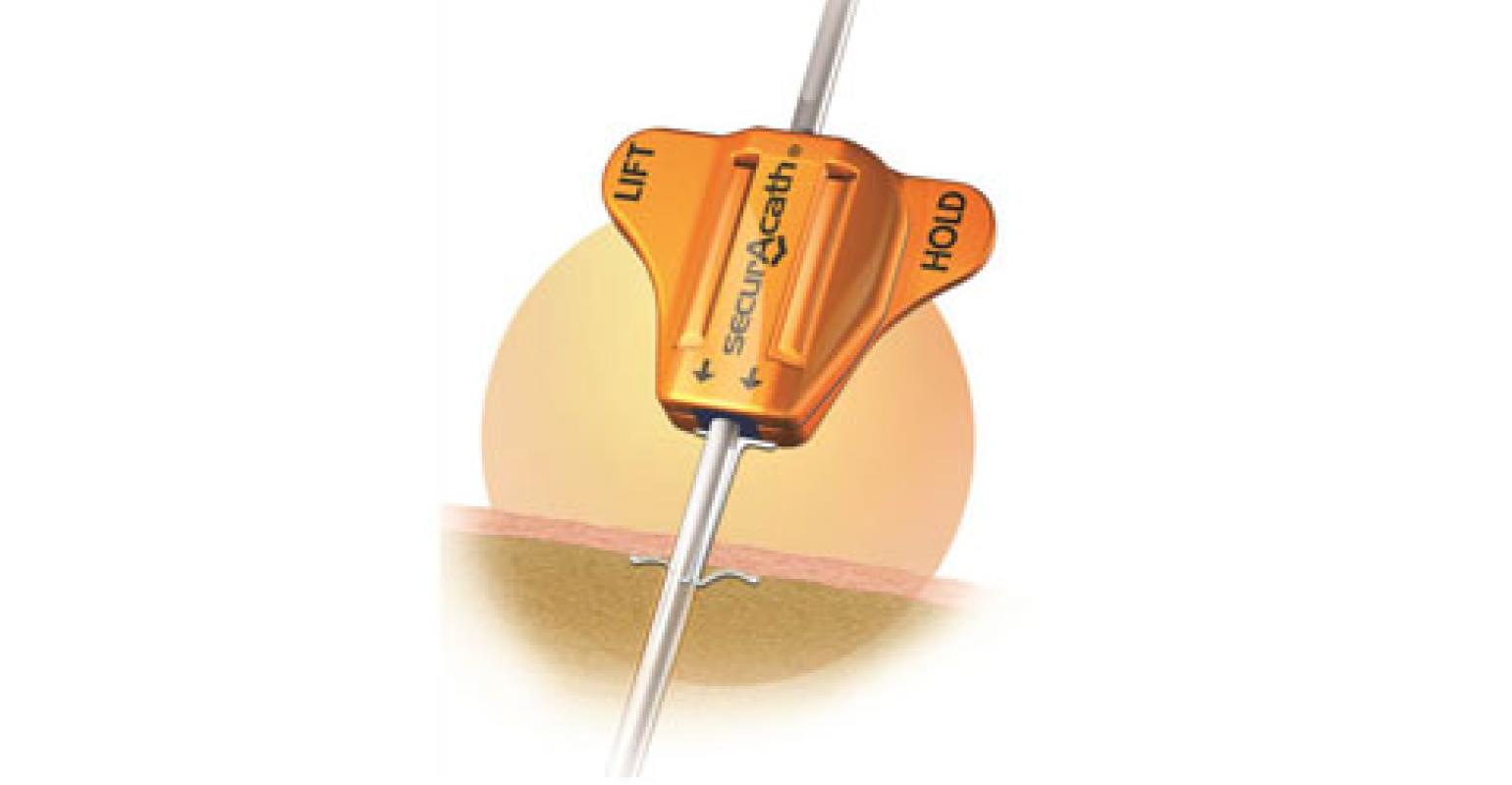 Interrad Medical says its nontraumatic securement device can help reduce problems such as migration and dislodgement in hundreds of millions of catheter lines.

A common observation about hospital patients is that they’re connected to a lot of “tubes.” Those “tubes” are catheters, used to allow drainage or administration of fluid to the patient, and they play a very important role in treatment.

When a catheter is inserted into the body, it’s typically held in place by either adhesives or sutures. But both of these securement methods can lead to problems such as pistoning, which can introduce bacteria into the site; migration; and dislodgement.

As an interventional radiologist, Dr. Michael Rosenberg used a number of different types of catheters to treat his patients and was all too familiar with the undesirable effects of catheter securement. He noted that the trouble usually began at the surface of the skin and posited that by securing the catheter beneath the skin he could avoid the problems associated with adhesive securement devices and sutures.

Rosenberg founded Plymouth, MN-based Interrad Medical in 2002 to commercialize his idea, and in 2008 the company received 510(k) clearance for its first product, SecurAcath. The first version of the device was a peripherally inserted central catheter (PICC) that included a subcutaneous anchor to secure the device below the insertion site, but Interrad Medical ultimately decided it wanted to make securement devices, not catheters themselves.

“SecurAcath is basically a subcutaneous catheter securement device that can be built on or added on to a catheter to secure it in a nontraumatic and cost effective way just beneath the skin,” says Joe Goldberger, Interrad Medical’s president and CEO.

The device consists of a nitinol anchor molded into a plastic base. The catheter tube runs through the device, and the nitinol anchor secures it just below the skin. Unlike adhesive securement devices, which must be changed weekly, SecurAcath can remain in place for the life of the catheter, and Goldberger says hundreds of patients have had it in place for well over a year.

“I think our device is quickly become a standard of care on PICC lines,” he says.

But the company, which recently won MD+DI’s Medtech Startup Showdown tournament, isn’t stopping there. Goldberger says Interrad Medical’s patents are “very broad with respect to the coverage and protection,” and it sees SecurAcath as a platform technology.

“Our device can be designed in virtually any type of material, any type of geometry, and built on or added on to any type of catheter,” he says.

In addition to PICC lines, Interrad Medical is also marketing SecurAcath for use with central venous catheters and eyeing the dialysis and drainage catheter markets. “We actually have the indication for drains in Europe,” Goldberger adds.

Peripheral intravenous (IV) catheters—which can be difficult to place, resulting in lots of painful needle sticks for patients—are another prospect for the company.

That all adds up to a sizeable opportunity.

To date, Interrad Medical has raised around $25 million, eschewing traditional venture capital in favor angel investments. That strategy helped the company stay funded through the tough years of the economic downturn and ensures that even the company’s earliest investors can share in its success.

“In other instances, when a company moves from angel to venture capital, many times those earliest investors get washed out and don’t end up with a value for their investment commensurate with the risk they took,” Goldberger says.

Interrad Medical currently has about a dozen full-time employees—primarily management and engineers. Most of its sales force and nurse educators are part-time contractors. It’s a small operation for sure, but that’s how Goldberger likes it.

“Many big companies doing wonderful things with technology have deeper pockets and the ability to have a much larger infrastructure to market many great technologies,” he says. “But smaller companies like ourselves can be very nimble, and innovate, and do what’s necessary to make the adjustments we have to make as we’re introducing new technology to make sure we’re on the best path possible.”