How to Select the Correct Miniature Liquid Valve 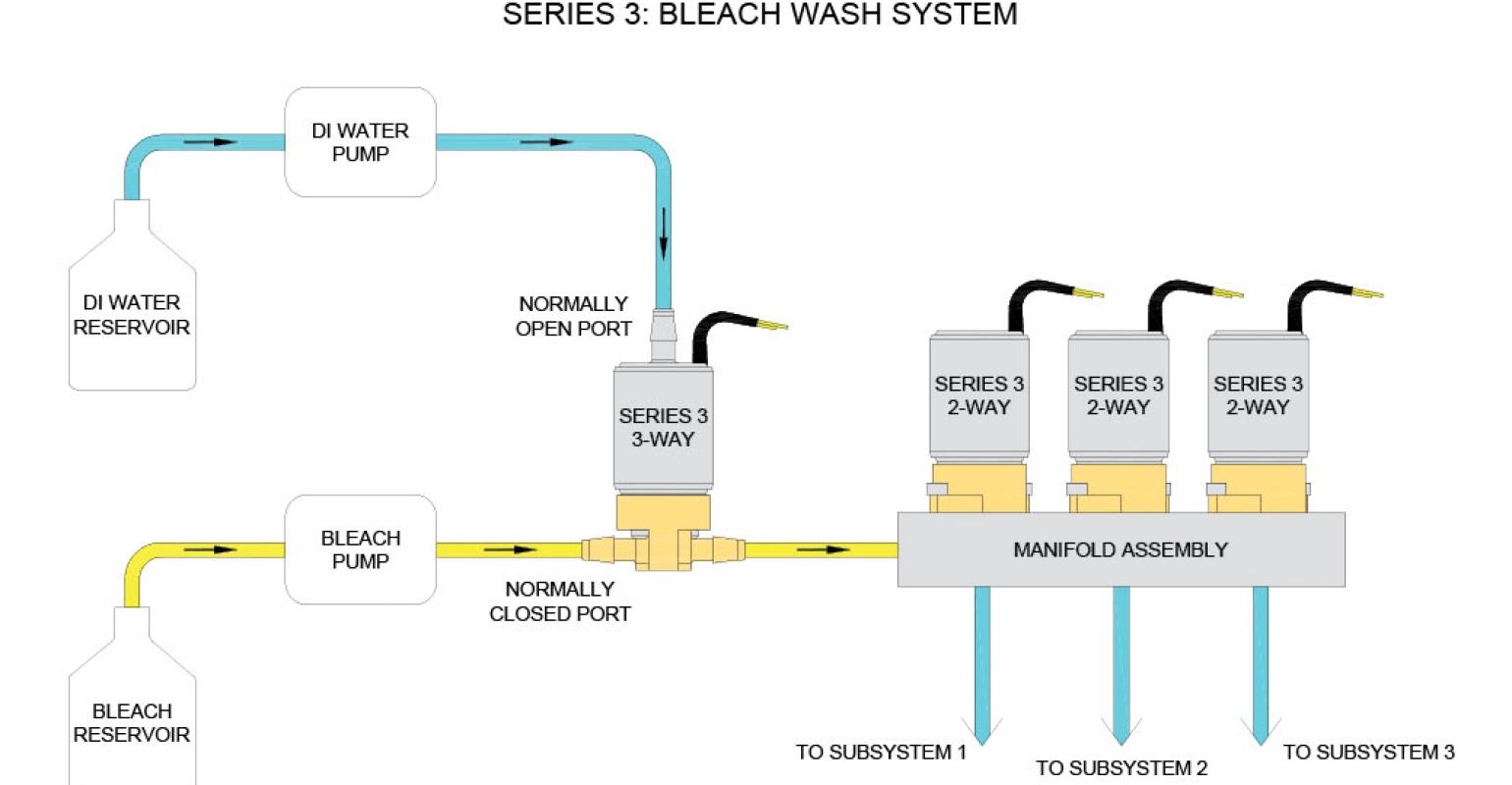 Choosing a valve for microfluidics applications can be easy if you consider the basic needs of the application.

In selecting the right miniature liquid valve for these kinds of applications, many factors, including the valve’s internal volume, the carryover, the kind of fluid to be pumped through the equipment, the valve’s leak rate, and the overall system pressure, should be considered. A good way to get a better handle on the selection process is to take a closer look at these requirements.

There are two reasons to look for a minimal internal volume in a liquid valve. The first is to reduce the cost of individual tests. For example, designers continuously search for ways to reduce the amount of expensive reagents used during a test. Having a reduced internal valve volume may allow for reduced reagent consumption. Secondly, internal volume can affect carryover, which occurs when a portion of a sample left in the valve contaminates the next liquid running through it. Poor carryover performance can result in questionable or inaccurate test results or require that the valve be washed for longer periods to clean it out, causing delays before the next sample can be run. This loss of throughput reduces the effectiveness of a laboratory instrument.

Although carryover can be worse in valves that have larger internal volumes, it is not always the case. The key to avoiding carryover is to ensure that the fluid path through the valve is very well swept. Swept refers to how well the fluid flows through the valve based on valve design (e.g., it does not contain pockets for the fluid to get stuck in and slowly leach out later).

Carryover is a function of the valve design, the flow rate of the liquid through the valve, and of the chemicals being pumped. Some liquids are more viscous than others, and it is possible to have a valve with a higher internal volume that is very well swept and has a lower carryover than another valve with a smaller volume that is poorly swept. When a valve is poorly swept, a smaller internal volume might have a higher carryover.

It is common to test for carryover by comparing valves from different suppliers in the same setup to see which performs best. Carryover is not a concern in applications for which a valve is always running the same kind of fluid or where mixing fluids is not an issue, e.g., if the valve delivers the same reagent all the time.

Another critical consideration is whether the valve is compatible with the fluid that will flow through it. Valves typically encounter common fluids such as solvents, acids, bases, bleach, and saline solutions. In general, a miniature liquid solenoid valve is made up of components such as a valve body, an elastomer seal, a spring, and a solenoid actuator, all of which must be compatible with the fluids with which it will come into contact.

If the valve that is not compatible it can fail prematurely or contaminate the fluid. For example, a fluid such as methanol can destroy a fluoroelasomer (FKM) seal. In this case, it is better to select a valve with a seal made from ethylene propylene diene monomer (EPDM).

In addition to choosing a valve with a compatible seal, it is critical to choose a valve with wetted parts (all parts that come into contact with the fluid) that are compatible with the fluid (see Table I). For example, valves with Teflon diaphragms can be damaged by media that contain particulates, whereas stainless-steel valves can be highly resistant to corrosive materials such as bleach. As long as the valve and its internal parts are compatible with the media, the valve is classified as “inert.”

Another factor to consider is a valve’s leak rate. There are two leak rates that are important to consider when selecting a liquid valve: internal and external leakage. Internal leakage occurs when a valve does not completely close. This can cause test samples to be contaminated or cause equipment to consume more fluid than needed. Many manufacturers publish the leak rates for their valves.

Most valves are rated bubble tight. Under this designation, the valve is tested with air at a certain pressure and with the valve closed. The valve is considered leakproof when no air bubbles leak past the valve seat. The test is a good indicator that the valve will close securely because the small molecules of a gas are much harder to seal against than the significantly larger molecules of a liquid. The test thus proves that no liquid will make its way out of the valve.

The main factor affecting internal leakage of a valve is the system pressure. The higher the pressure, the more difficult it is to seal against it. For low-pressure applications, rocker isolation valves often work well. For high-pressure applications, a poppet valve does a much better job (see the sidebar "Type of Miniature Liquid Valves"). Using the operating pressure specification found in the manufacturer’s catalog helps in deciding which valve will work best.

When a valve leaks externally, it might indicate that the valve is damaged, was installed incorrectly, or the connections to the valve are not secure. Additionally, some valve designs are simply better at eliminating external leakage.

External leakage must be avoided because when a valve is handling caustic material, fluid dripping from the valve could damage the equipment or invalidate test results. An important example can be found in a bleach valve. Should bleach leak out of the valve and into the system, it can destroy critical components. Noxious fumes can also be a safety concern for operators or patients near the device.

Controlling bleach is important in applications such as clinical diagnostics. For example, in vitro diagnostics machines pump blood and body fluids. Periodically, the whole system needs to be shut down and the samples removed (see Figure 1). Bleach is pumped through all the fluid circuits to clean out any proteins or other matter. Next, the system is flushed with water to remove the bleach. A special grade of stainless steel and materials that are highly resistant to bleach can improve the effectiveness and stability of the valve.

In terms of risk mitigation, when pumping a fluid such as bleach, it is better to select a poppet valve over a diaphragm valve because the diaphragm is a thin membrane of rubber that, over time, can fatigue enough to leak externally.

To reduce external leakage, it is best to mount the valve by way of a manifold. The manifold provides a flat surface on which to mount the valve and has internal passageways, instead of a bunch of tubing, that connect the valve to the system. Manifold mounting allows a higher packing density of all the system’s valves and simplifies the fluidic design.

The second best approach to attaching the valve is by way of threaded connections. The connection most likely to leak externally is tubing pushed onto a barbed fitting.

Another basic consideration is the fluid flow through the valve. Generally, system pressures typically range from about 10 to 30 psi and are generated from devices such as a pump. When selecting a liquid valve, it is important to consider what orifice size will meet a designer’s target flow rate at the particular operating pressure. To evaluate the flow rate, consult the valve’s flow curve.

Fluidic design is fairly complex. The flow rate required at different points in the system must be known, and the correct orifice size can be selected accordingly after looking at the flow curve. The orifice size determines the flow capacity of a valve, but often it does not provide the exact flow rate required by an application. However, the flow rate can be controlled by timing the opening and closing of the valve to supply only the desired volume of fluid required. The exact valve timing can be programmed into the system controller.

Particulates in the fluid can restrict the flow of a valve or prevent it from opening or closing fully. For example, crystallized salts could get stuck in the valve, or the media could contain debris. Different valves are better suited to handling particulates than others. For example, a type of poppet valve pushes a metal plunger with a hard seal material down on the seat using a return spring force. It easily breaks up crystals that may form in the valve. Diaphragm isolation valves and rocker valves are not as good with particulates because they have a soft diaphragm that particulates can deform or damage, causing the valve to leak internally.

The electrical voltage required to actuate a miniature liquid valves must also be considered. The typical voltages used in the systems under discussion are 12 or 24 V dc. Selection here is just a matter of choosing the appropriate voltage for the system.

In addition, reliability is critical. Over the life of a system, a valve might open and close hundreds of thousands to millions of times. To ensure a valve will operate reliably, look for one with a reliability rating of millions of cycles. The valve design is a major factor of how reliable it will be. Valves without sliding metal-to-metal surfaces are best because they minimize wear on the moving parts, thereby increasing the life of the valve.