Home>Product Development>Components
Recent
What the Minerva Supreme Court Decision Could Mean for the Medical Device World and Beyond
Feb 25, 2021
The Quest for an Earlier Diagnosis of Autism in Children
Feb 25, 2021
Medtronic Recalls Valiant Navion Due to Patient Safety Issue
Feb 25, 2021
Virtual MD&M | BIOMEDigital Connects the Global Medtech and Biomedical Device Community
Feb 25, 2021

Researchers found a way to capture and analyze individual blood cells that could be used to make a variety of diagnostic devices for as little as $5 each. 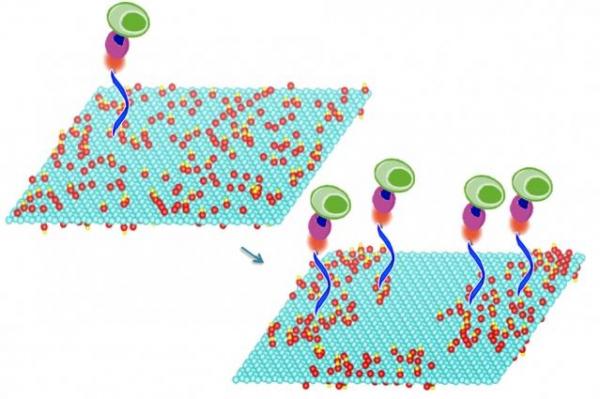 Mild heating of graphene oxide sheets makes it possible to bond particular compounds to the sheets' surface. These compounds in turn select and bond specific molecules of interest, including DNA and proteins, or even whole cells. In this image, the treated graphene oxide on the right is nearly twice as efficient at capturing cells as the untreated material on the left, according to researchers.

Researchers from MIT and National Chiao Tung University in Taiwan have teamed up to develop a new cost effective cell analysis method that uses graphene sheets to capture and analyze individual cells from a small sample of blood for medical and biological tests. The new system could be used to develop a variety of different low-cost diagnostic tests that could be used in low resource areas where regular medical facilities and equipment is scarce.

The system uses a series of specially treated sheets of graphene oxide that work to isolate specific compounds. The graphene oxide is then heated using a process known as low-temperature annealing -- a technique that allows the material to be heated up using relatively mild temperatures. This technique enables the graphene oxide to bond with particular compounds on the surface of the sheets. Those compounds can then select and bond with specifically selected molecules like DNA, various proteins, or even entire cells -- all of which can then be subjected to a variety of different diagnostic tests.

The oxidized version of graphene used in this system aims to take advantage of the material's unique mechanical and electrical properties that researchers have been trying to leverage for years. Once hailed as the next wonder material, graphene was thought to be the material that could usher in the next generation of innovative nanoelectronics devices. However, given that it has been difficult to make on a large scale, it still has yet to replace silicon in electronics for good. Despite these difficulties, researchers have slowly begun to find new uses for the material.

These most recent findings demonstrate the latest efforts to utilize a graphene oxide substrate to capture specific cells and molecules that can be used to create more targeted diagnostics. The novelty of these new graphene sheets lies in the treated nature of the material, which enabled the team to achieve a higher rate of success when capturing specific cells and molecules.

To demonstrate this, the team of researchers used molecules that can quickly capture specific immune cells that can be used as biomarkers for certain cancers. The group was able to show that the treated sheets of graphene oxide were nearly twice as efficient when capturing cells from whole blood samples when compared to devices that were created using ordinary, untreated graphene oxide.

Not only does the system allow for a more targeted approach in the process of cell capturing, but researchers say that it can capture and assess cells and biomolecules under ambient conditions without the need for refrigeration of samples or temperature controlled incubators. This means that the whole system allows for the production of various diagnostic devices on a large scale for less than $5 per device, and can be used for point-of-care testing in resource-limited areas around the world.

As the group continues to explore the technology, they hope to create a single device that can use this method to test for a variety of different diseases, all of which could be placed on a small glass slide that could be examined under a microscope. They'll also be striving for improved efficiency when it comes to capturing cells and biomolecules, in the hopes that this method could be used to detect even the rarest of diseases at the cellular level.

Onward and Upward for Single-Use Systems in Bioprocessing
Jan 25, 2021