An Endoscopic System Reduces Costs by 50% 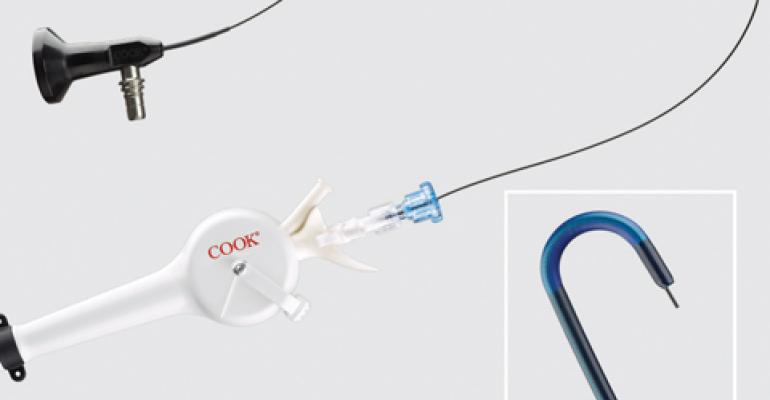 The Flexor Vue is not the endoscope for every situation, says Jean-Marc Creissel, Cook Medical’s Global Business Unit Leader in Urology. But what it does feature is accessibility, reusability, and reduced costs. The system also helps Cook close the loop, so to speak. “It’s a natural compliment to the product line and allows physicians to treat stone cases using only cook products,” Creissel says.

Cook’s latest offering consists of a disposable, sterile sheath and a visualization source that is reusable up to 10 times. The wand is a bundle of fiber optics at 9 French. The disposable sheath decreases the possibility of patient-to-patient contamination.

The cost of the system is 50% less than a normal endoscopic system and it is available on the shelf. Physicians who don’t require a cystoscopy or ureteroscopy can use the system to manage stone, kidney, and bladder procedures. Creissel believes the systems enables hospitals to extend their capabilities to help patients without needing to invest so much in capital equipment.

“We’ve seen curiosity from physicians. They note that their hospitals often have a limited number of traditional scopes and that it takes time to clean and sterilize those for use. This system enables them to work quickly.”

The device is available now in the United States and Europe and will be launched globally. “The system has applications for those countries that don’t have capacity to have the same equipment seen in Western hospitals,” Creissel says.

--Heather Thompson is editor in chief for MD+DI. Meet up with her at Orthotec, June 5-6.