Easing Hemodialysis with a Smart Valve 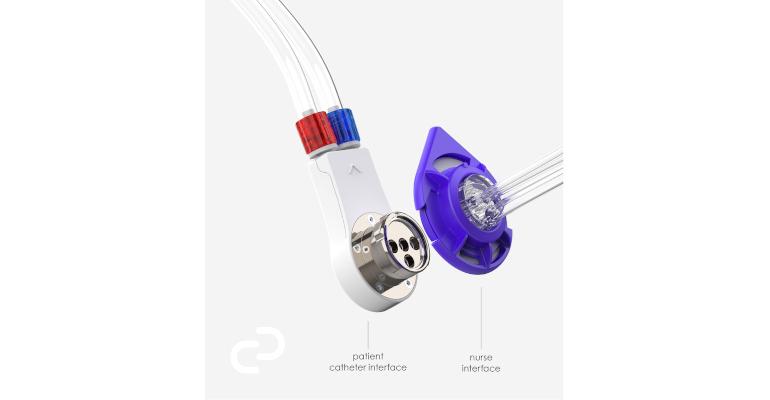 Ubiplug, a startup based in Caen, Normandy, France, hopes to ease hemodialysis for patients with end-stage renal disease (ESRD). The company has developed a smart valve system for hemodialysis catheters that allows nurses to switch session steps without having to open the catheters.

Eric Jean, cofounder and CEO of Ubiplug, tells MD+DI that the smart valve system consists of two titanium disks: a stator (connected to two channels) and a rotor (connected to five channels). “In hemodialysis, for example, the rotor is designed to be operated using a disposable plug that when connected to the different channels appropriately can perform all the steps needed (as many as 10) to implement a dialysis session, without ever opening the catheter,” he explains.

“The most significant benefit of Ubiplug’s smart valve system for vascular access is its capacity to eliminate the many manipulations nurses make when handling Luer lock extensions (special tubes), hence minimizing patient exposure to the main sources of potentially life-threatening infections,” he continues.

Jean notes that “while Ubiplug’s smart valve system with its single direct connection makes the Central Venous Catheter (CVC) process easier and improves ergonomics, it does not change the methodology in performing vascular access. The same standard sanitary protocols, including the number of syringes and the lock management are maintained.”

Hemodialysis is one of the most expensive treatments for ESRD, according to Ubiplug, which points to annual global costs of $55 billion (€48.6bn). The lengthy ESRD treatment (4-hour sessions) can impact patients’ quality of life, as can disease symptoms and comorbid conditions, the company shared.