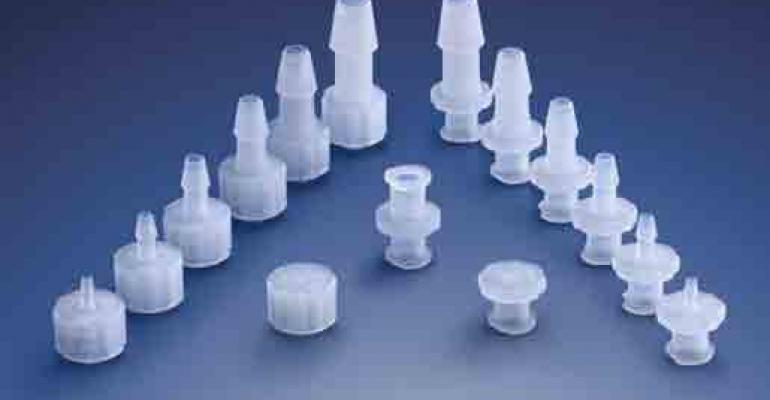 Medical device makers must consider time and money when choosing between stock and custom device components.

Qosina’s line of Kynar barbed luer connectors come in various sizes and configurations and are kept in stock and ready for customer orders.

Medical device makers pondering the materials and designs of their products all face the same choice at some point: Make the molds and medical components for the device in house, or buy components from an outside supplier. Companies electing to buy components from a third party have the further option of choosing between stock components and custom solutions.

The choice may be governed by the type of device. Off-the-shelf components may suffice for lower-risk devices, while Class III devices may require custom-made components. But in many cases, medical device companies base their decisions on two things: time and money.

Stock components offer a lower-cost option and a shorter lead time. Non-sterile, off-the-shelf components reduce the timeline of the design phase and also eliminate the costs associated with tooling—making the molds used for producing medical components that may end up idle for much of the year, says Scott Herskovitz, vice president of sales and marketing for Edgewood, NY-based Qosina. These off-the-shelf medical components are used in a wide range of devices, such as single-use consumable devices or accessories for a medical device. These components can also be included in kits or trays that are packed and sterilized for specific procedures.

Qosina provides medical device makers with components that they can use in research and development efforts, such as testing different materials and configurations. These projects can lead to production runs, but in some circumstances the price point that a medical device company targets for the finished product, as well as the size of the production run, don’t justify manufacturing everything in house, Herskovitz says. A stock component can be the faster and less expensive alternative.

The nature of being an off-the-shelf supplier means that Qosina keeps a wide selection of products for a wide range of applications. But even though stock suppliers aim to have a wide selection of components available, Herskovitz says device makers sometimes develop new ideas that don’t have an available stock solution. For those situations, Qosina’s product development department can work more closely with customers to modify existing components or even create new ones. While these are technically custom parts, they do not involve making a new tool, mold, or process, Herskovitz says. He adds that modifying an existing product should be faster and easier than creating a new part from scratch.

When a greater level of customization is required, medical device makers opt for components made specifically for a particular application. Custom components can be made to fit certain requirements, taking into account parameters such as sterility, coefficient of friction, and biocompatibility, says Lih Fang Chew, vice president of global marketing for Minnesota Rubber & Plastics. The Minneapolis-based company supplies stock and custom medical components in four areas: surgical, treatment, drug delivery, and diagnostics. A custom-made component can also help ensure that the component functions exactly as it should in the device, Chew says.

In some circumstances, medical device makers choose custom components because they want their devices to have a distinguished look compared to their competitors' devices, Chew notes. Also, as devices become smaller and more portable, suppliers are seeing growing demand for miniaturized components. In addition to its capabilities making large components, Chew says that Minnesota Rubber has experience making micro molds for micro parts.

Medical device companies should take into account certifications and qualifications of their components suppliers to ensure that their finished products will pass industry and regulatory muster. The biggest new technical challenge that Qosina sees is the drive to incorporate the new ISO 80369 standards for single-use components. This new standard aims to eliminate risks associated with misconnections. The company is currently developing many components to meet the new standard.

Qosina sells non-sterile components that undergo further processing by the medical device manufacturer. It’s up to the device company to sterilize, validate, package, and register the finished product with FDA, but Qosina will provide the documentation that companies can use to support their regulatory filings.

By and large, medical components suppliers want to work with customer efforts to save money. But there’s a fine line between saving money and cutting corners. In some cases, device makers try to use industrial grade material, rather than medical grade material—a choice that could lead to a device being rejected by a regulator, Chew says.

In other cases, manufacturers may bring in the medical component supplier too late in the process. Chew says that Minnesota Rubber prefers to be contacted while the device is still in the ideation stage. That way, the supplier and the device maker can collaborate on the materials and design. However, she says that some companies, particularly startups that are in a rush to launch a product, leave such choices until further along in the process.

“That’s way too late because if there’s something wrong with the design and we try to help you, it’s going to cost you a lot more [in time and resources],” she says.

Off-the-shelf components are already less expensive than custom-made components. Herskovitz says medical device companies can save even more money on stock components by placing a blanket order. For example, if the company knows it will need 1,000 pieces per month for 12 months, Qosina can supply an order of 12,000 total pieces, with 1,000 pieces released each month. Sourcing components in this manner can help a medical device maker shorten lead times and reduce inventory.

Herskovitz points out, “You get the benefit of the volume discount, security of knowing the product will show up every month as needed, and [you are] only charged for the amount shipped with each release."