When Sunrise Technologies International Inc. (Fremont, CA) developed its next-generation holmium-laser-based system to correct farsightedness, its engineers sought to automate the unit's motion control positioning. The system relies on a multiaxis positioning system to steer a laser beam to the precise cornea location and then emit laser light to alter the shape of the cornea without physically touching the eye.

Sunrise Technologies develops holmium-laser-based systems that correct ophthalmic conditions through a patented process that shrinks collagen. The company's Cornea-Sparing LTK system was designed to correct farsightedness, loss of focus due to natural aging, and overcorrection resulting from phototherapeutic keratectomy (PTK) and LASIK treatments for myopia. The system is in use in Europe and is in clinical trials in the United States.

Sunrise's previous laser correction system employed manual control of the positioning system. After exploring numerous options, the company decided to take a chip-based approach with its new LTK system and implemented the MC1401A servomotor chip set manufactured by Performance Motion Devices Inc. (PMD; Lexington, MA). By working with PMD, Sunrise was able to integrate the motion requirements onto a single card and realize a size reduction and cost savings. 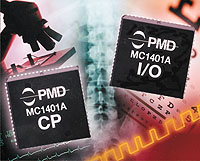 To select the optimal motion control technology, Sunrise surveyed a variety of prospective motion solutions for the project. "We also looked at purchasing an off-the-shelf motion card," said Satish Herekar, engineering program manager at Sunrise Technologies. "However, cost was an issue, and by building our own, we were able to integrate the controller and the amplifier on a single card. In many medical applications, this high level of integration is important because it makes servicing the product simpler and reduces cabling cost." In addition, Herekar said, "by purchasing the motion ICs off the shelf, Sunrise was able to focus on the system software rather than low-level hardware development."

How the System Works

The LTK system's electronic motion system tracks eye location throughout the procedure. It incorporates 15 motors, some of which are used for driving x-y motors and others for beam shutter controls. During the procedure, the system automates the orientation of eight laser spots (which are 2.1-µm treatment beams) simultaneously.

Sunrise selected the MC1401A intelligent programmable chip set in part because of its ability to perform complete motion sequences, such as moving to a point using an S-curve profile or maintaining a position using position integral differentiation (PID) control. The chip set consists of a processor for profile and PID calculations and a logic device to handle motor-specific functions such as pulse width modulation (PWM). An important requirement of the LTK system was the ability to continuously track the motion platform using smooth profiles. The chip set's S-curve profiling mode met this requirement. S-curve profiling results in smoother motion by changing acceleration gradually rather than abruptly—as trapezoidal profiling does. These abrupt changes in acceleration inject oscillation-inducing energy into the components of a machine. The S-curve profile, on the other hand, reduces jerk (the rate of change in acceleration) by creating a transition between constant and zero motion. The S-curve profiles thus reduce vibration energy, resulting not only in smoother motion but also in a lower rate of component wear.

The chip set provides four axes of servo control with PWM or digital/analog (D/A)-compatible output. The motion processor consists of two ICs and is available in 1-, 2-, or 4-axis configurations. It provides trajectory generation and closed-loop digital servo control for a variety of servomotors, using incremental or absolute encoder-position feedback signals and a D/A- or PWM-compatible output drive. Axes can be programmed either independently or in synchrony to allow advanced multiaxis motion such as circular and continuous path profiles.

The MC1401A is controlled by a host processor that interfaces with the chip set via an 8-bit, bidirectional port. Communications to and from the motion processor chip set consist of packet-oriented messages.

The MC1401A is suitable for medical automation applications not only because it provides smooth and precise motion, but also for its safety features, such as its automatic position error rate. This feature can signal the user when certain predetermined conditions occur. Travel limit switches increase safety by automatically recognizing end-of-travel conditions on the fly. When the overtravel condition becomes active, such as during a system malfunction, the host can be automatically notified, thus limiting the potential for costly damage to the equipment.

"PMD's chip-based approach to motion control saved us a lot of space," Herekar concludes. "The MC1401A motion chip set came with example schematics and application notes that allowed us to develop a low-cost, yet powerful, motion controller relatively quickly."