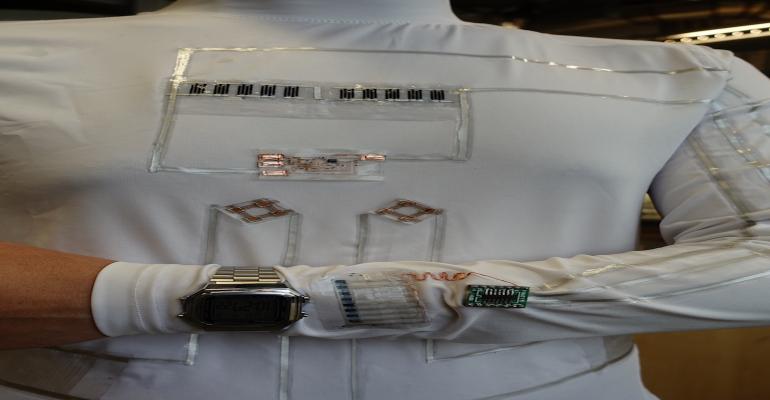 A shirt developed at UC San Diego can harvest energy both from sweat and the movement of the user.

Imagine being able to comfortably wear your own individual power grid that can keep your devices charged throughout the day thanks to sweat and movement.

That’s the potential future promise of technology developed by nano engineers at the University of California (UC) San Diego. A team in the university’s Jacobs School of Engineering developed a wearable microgrid that harvests energy from various renewable sources that can power small electronic devices.

While the technology itself is not yet user-friendly or comfortable enough that people would want to wear it all the time, it does show how researchers can use various energy-harvesting devices to provide a portable and self-sustaining microgrid, said Lu Yin, a nanoengineering Ph.D. student at the UC San Diego Jacobs School of Engineering.

“We’re applying the concept of the microgrid to create wearable systems that are powered sustainably, reliably, and independently,” he said in a press statement. “Just like a city microgrid integrates a variety of local, renewable power sources like wind and solar, a wearable microgrid integrates devices that locally harvest energy from different parts of the body, like sweat and movement, while containing energy storage.”

Yin worked on the technology in the Center for Wearable Sensors at UC San Diego as part of the Nanobioelectronics team led by UC San Diego Nanoengineering Professor Joseph Wang, the director of the center.

The microgrid that researchers developed is comprised of three parts--biofuel cells powered by perspiration, motion-powered devices called triboelectric generators, and energy-storing supercapacitors. The various parts of the device are flexible, washable, and were screen-printed onto a shirt in a way that was intended to optimize the amount of energy each one would harvest, researchers said.

The other part of the energy-generating solution—supercapacitors—was positioned on the outside of the shirt on the chest as a way to pull and store energy from both devices so it can be discharged when needed to power small electronics, researchers said.

Each of the individual energy-related devices functions differently and plays a unique role, researchers said.

Wang’s team developed biofuel cells more than seven years ago; they use enzymes to trigger a swap of electrons between lactate and oxygen molecules in human sweat to generate electricity. The current iteration of this technology is stretchable and can generate more power than the original device, researchers noted.

The team connected all of the parts with flexible silver interconnections that are also printed on the shirt and insulated by waterproof coating. The overall device can be washed without harming the performance of any of the parts; however, detergent can’t be used, or it compromises the device, researchers said.

The two energy-harvesting parts each provide a different type of power—a continuous low voltage from the biofuel cells and pulses of high voltage from the triboelectric generators, researchers said. This is the reason for the supercapacitors, which are there to store the energy from both power sources and discharge it as needed.

The idea to combine different ways to harvest energy—from both movement and sweat--in one integrated solution is that they complement each other and provide backup energy if one is not working optimally, Yin explained.

“When you add these two together, they make up for each other’s shortcomings,” Yin said. “They are complementary and synergistic to enable fast startup and continuous power.”

Indeed, the combination allows the wearable microgrid to power devices continuously, and the entire system boots two times faster than having just the biofuel cells alone, as well as lasts three times longer than just the triboelectric generators alone, he said.

Researchers published a paper on their work in the journal Nature Communications.

Researchers tested the wearable microgrid on a human subject during 30-minute sessions that consisted of 10 minutes of either exercising on a cycling machine or running, followed by 20 minutes of resting.

Results showed that the shirt could power either an LCD wristwatch or a small electrochromic display—a device that changes color in response to an applied voltage—throughout each 30-minute session.

Workout clothing is likely the first type of application for the microgrid, but the innovation of combining and integrating the devices was more the point of the research than immediate use of it, Yin said.

“We’re not just adding A and B together and calling it a system,” he said in a press statement. “We chose parts that all have compatible form factors; matching performance; and complementary functionality, meaning they are all useful for the same scenario.”

Moreover, as the device evolves, it will be applicable to more than just to design new wearables for exercise, Yin said.

“We are not limiting ourselves to this design,” he said. “We can adapt the system by selecting different types of energy harvesters for different scenarios.”

This is the focus of researchers’ work going forward, they said, as they develop other designs that can harvest energy in less dynamic ways—such as while someone is sitting inside an office, for example, or moving slowly outside, they said.