The Robot Will Do Your Angioplasty Now 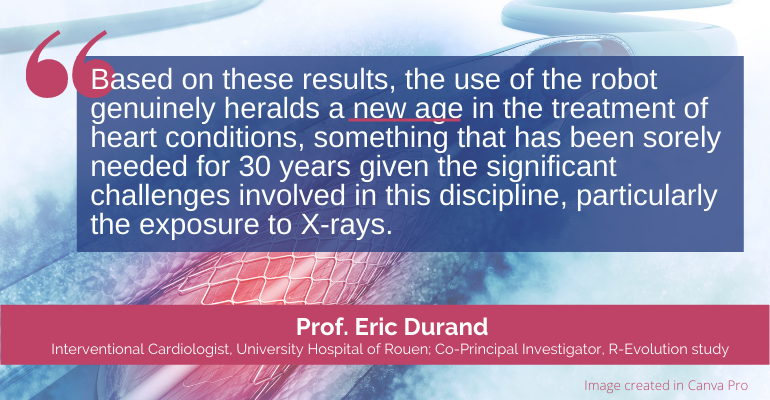 A European study of 62 patients showed that coronary angioplasties using the R-One robot from Robocath are safe and effective, and reduce physicians' exposure to radiation.

The R-Evolution trial was a prospective, non-randomized, single-arm clinical study designed to assess the safety and efficacy of the R-One robot when used for coronary angioplasties. A total of 62 patients (64 treated lesions) at six European centers were included in the trial. A quarter of the lesions were classified as complex, Robocath noted.

Rouen, France-based Robocath reported 100% clinical success rate (zero complications linked to the robut up to 30 days post-procedure); geater than 95% technical success rate; and an 84.5% reduction in physician radiation exposure. The company is expected to present the results in detail later this week at EuroPCR in Paris.

The R-One robot is specifically designed to perform coronary angioplasties (stent implantation). From a control station shielded against radiation, the physician uses joysticks to remotely control the devices needed for the procedure, such as guidewires, balloons, and stents. R-One was CE-marked in 2019, and is currently used in Europe, Africa, and China.

In addition to reducing exposure to radiation, physicians using the R-One robot do not need to wear heavy lead protective gear during the procedure. According to Robocath, the navigation and accuracy of balloon and stent placement is improved due to the millimeter precision of the robotic controls and because the devices are locked tightly in position while moving through the vasculature.

“This was the first clinical trial in Europe that aimed to assess the safety and efficacy of robotic coronary angioplasty. The results are extremely positive, with a technical success rate of over 95%, and a clinical success rate of 100%, all of which show that angioplasties with R-One are safe and effective for patients,” said Eric Durand, an interventional cardiologist and co-principal investigator in the trial. “In my experience, the average length of a robotic procedure (19.9 ± 9.6 min) is roughly the same as that of a manual procedure. Based on these results, the use of the robot genuinely heralds a new age in the treatment of heart conditions, something that has been sorely needed for 30 years given the significant challenges involved in this discipline, particularly the exposure to X-rays.”

One of the goals of the trial was to measure X-ray exposure to robotic operators compared with traditional manual operators. This was simulated by placing a pole near the operating table. The average radiation dose received by the robotic operator was 0.2 µSv, which was 300 times lower than the radiation received by the simulated manual operator on the head and other parts of the body not protected by lead gear. On average, performing a coronary angioplasty robotically reduces the physician’s exposure to X-rays by 84.5%. Robotic operators still receive some X-ray exposure while manually placing the first device prior to beginning the robotic portion of the procedure; if the physician has an assistant who places the first device, the radiation dose to the physician is reduced by 100%.

“The extremely encouraging results from this study and the reports that we have had from initial users confirm that our solution is both suitable and beneficial for patients and doctors alike,” said Lucien Goffart, CEO of Robocath. “Our plan is to continue to demonstrate and quantify these benefits through a highly pro-active clinical program in partnership with centers of excellence such as Rouen University Hospital, ZNA Middelheim in Antwerp, the Neuss Clinic in Germany, and many others. This is an essential step towards better meeting the needs and expectations of our users. We firmly believe that this is just the beginning of vascular robotics and that it will continue to grow with our current, as well as our future, robotic generations, with which the more complex procedures will be performed. Robotics is right at the heart of a sea change within this sector. It will be the main vector for integrating future technological advances by centralizing the whole procedure into one single interface, which will in turn be the starting point for using AI. There is no doubt in my mind that the future of interventional cardiology lies in integrating robotics.”