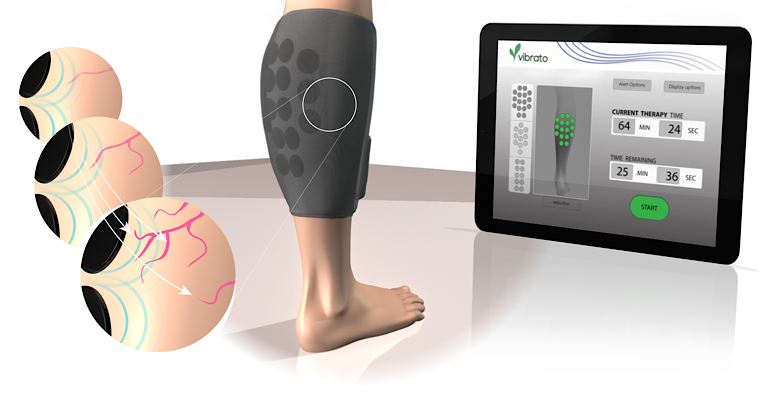 The Irvine, CA-based company has raised $4 million in a series A and won a $1.5 million NIH grant to take its wearable through clinical trials.

Vibrato Medical is combining the power of ultrasound and wearables to treat peripheral arterial disease. The Irvine, CA-based company raised $4 million in a series A and won $1.5 million in a National Institutes of Health grant to take its wearable, designed to treat patients suffering from critical limb ischemia (CLI) to clinical trials.

“Vibrato Medical came up with a wearable device that is put on patient’s calves,” Juliana Elstad, CEO at Vibrato told MD+DI. “It has built-in ultrasound transducers that emit acoustic energy. That acoustic energy, called therapeutic ultrasound really works in two ways. One, it dilates the vessels, and two it promotes new vessel growth.”

The firm noted that unlike endovascular and surgical revascularization, the device can be applied without a skin incision and its advanced patient compliance monitoring allows for treatment within the convenience of patients’ homes.

The company plans to use Series A funding and its $1.5M NIH grant for its pilot clinical study, to design and build its second-generation device, and advance its intellectual property. The therapeutic ultrasound been has shown to promote vasodilation and long-term blood vessel growth in weeks and is appropriate for daily treatments.

Vibrato will go for FDA clearance for the technology and has plans to eventually vie for approval in Europe.

Founded by cardiologist and physician-scientist Babak Nazer MD and entrepreneur Bobak Azamian MD, PhD. The company said its technology is the first wearable therapeutic ultrasound device designed to promote vasodilation and vessel growth. Unlike endovascular and surgical revascularization, the device can be applied without a skin incision and its advanced patient compliance monitoring allows for treatment within the convenience of patients’ homes.

Elstad said the device was cost-effective because it takes the invasiveness out of the therapy. She also noted that the company designed the device with the patient in mind.

“Patients are our true North Star in everything we do at Vibrato,” Elstad said. “We always think from the patient’s perspective about our technology. It also is [part of] the trend that’s emerging in medical technology in general and that is – to make technology less invasive.”

Can Boston Sci’s Leadless Pacemaker Stand Out in the Market?
Dec 06, 2021