HomeMarketsCardiovascularCovidien Pulls Out of OneShot Renal Denervation Program Citing Slow Market Development
Recent
Markets
What Would a Dexcom-Insulet Merger Look Like?
May 24, 2022
Can Transparent AI Analysis Boost IVF Outcomes?
May 23, 2022
What FDA’s New Machine Learning Guiding Principles Really Mean
May 23, 2022
LabCorp Is Focusing on Skin Cancer with New Test
May 23, 2022 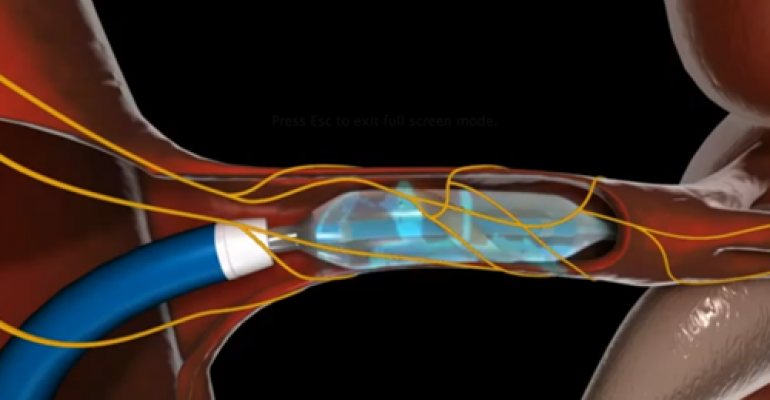 Renal denervation, which aims to use electrical stimulation to reduce the blood pressure of patients whose hypertension is not controlled by multiple drugs, is getting a bit of a bad rap these days.

First Medtronic reported on Jan.9 that the largest renal denervation trial that the company - and indeed anyone else - had sponsored failed to meet its primary efficacy endpoint.

And now Covidien has some bad news too regarding its renal denervation program. The Dublin, Ireland company announced Tuesday that it is pulling the plug on its OneShot Renal Denervation program because of slower-than-expected development of that market.

The OneShot system, which won CE Mark in February 2012, is an over-the-wire balloon-based irrigated catheter technology for the treatment of hypertension. The product came out of Covidien’s upfront $60 million cash acquisition of Maya Medical, a California startup in 2012. The product is not approved for sale in the U.S. As a result, the company is canceling its clinical trial - the Rapid II study - and taking an after-tax charge of $20 million to $25 million.

While Covidien is exiting the OneShot market, it still believes in the future potential of this market, that experts have previously put at billions of dollars. Other companies in the renal denervation market at St. Jude Medical and Boston Scientific.

After telling the world of its poor showing, Medtronic, which has a much larger footprint in renal denervation, said it is also convening an independent panel to review renal denervation progams. Specifically, it will advise the company on “future of the global hypertension clinical trial program, as well as provide advice on continued physician and patient access to the Symplicity technology in countries with regulatory approvals” it said in a news release. However, St. Jude Medical's CEO Daniel Starks is not putting the breaks on its EnligHTN renal denervation platform. Nor is Boston Scientific.

Like Covidien’s renal denervation program, Medtronic’s Symplicity denervation system also came out of an acquisition, though much larger. In 2010, Medtronic paid an upfront $800 million to acquire Ardian.

Here is an animation of how Covidien's OneShot Renal Denervation system works: