Can You Operate On Me Now? 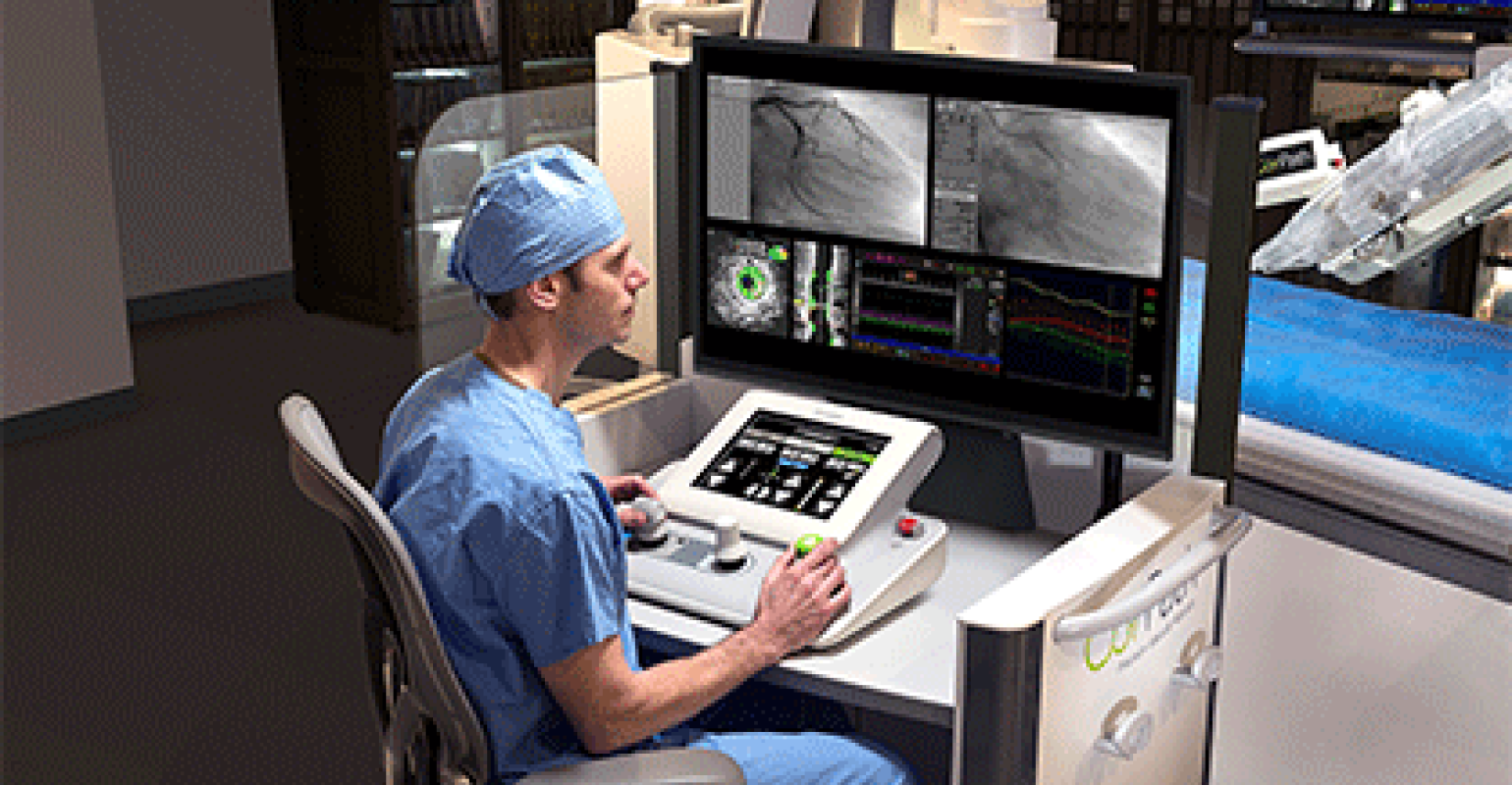 A physician drives the controls of a Corindus CorPath GRX vascular robotic system.
What are the factors holding up remote robotic surgery?

To once again borrow from Charles Dickens, it is the best of times and worst of times for vendors and clinicians researching the effectiveness of remote robotic surgery. Though a trans-Atlantic gall bladder removal in 2001, dubbed the "Lindbergh operation," demonstrated surgeries could be performed remotely from thousands of miles away, the technique has stalled.

"The use of telesurgery technology is at a halt and has been since the first and only telesurgery was conducted in 2001," Paul Choi, Rod Oskouian, and R. Shane Tubbs wrote in a May 2018 article summarizing the field's recent history and prospects in the journal Cureus. "However, with further optimization of visual display, latency time, and haptic feedback technology, design and publication of further randomized controlled trials, and minimization of the factors that limit its clinical translation, telesurgery’s widespread implementation in clinical settings will become highly feasible and geographical barriers will be eliminated."

"We tell folks we are 24 to 36 months out," Teany said. "It isn't long term and our approach is to go after remote robotics as fast as we can. This is not five years out. Within the next two to three years we think we are commercializing remote technology."

Outside factors have influence

However, while Teany and pioneering telerobotic surgeons Mehran Anvari and Ryan Madder agree the technology has made significant progress, factors outside the robotic console have outsized roles in dictating how quickly and pervasively the market might pick it up. High among those external factors is the robustness of the underlying telecommunications network, particularly the amount of latency between the operating surgeon and the patient and back. Madder—who recently published results of remote telestenting procedures on both an ex vivo model and in pigs—told MD+DI that calculating what is acceptable network latency is not a one-size-fits-all proposition.

"I think it's reasonable to ask if the latencies that are tolerable with remote surgeries are the same as they would be with remote coronary stent procedures," Madder said. "Because those are two very distinctive procedures and the skill sets are different."

For instance, he said, the motions needed to complete a coronary stent may be simpler than those involved in open surgery, but that does not mean stenting is less susceptible to network latency.

"In the coronary arteries, a distance of one or two millimeters matters," he said. "You can imagine a scenario where if you were doing a robotic telestenting procedure and what you were seeing on the screen and what you're reacting to with the joystick is delayed a second or two. If you see that your wire is getting to a position you need to stop in order not to perforate the coronary artery or tear something, that wire may have moved forward those two seconds and caused something catastrophic."

Both Madder, an interventional cardiologist at Spectrum Health in Grand Rapids, MI, and Anvari, CEO of Canada's national Center for Surgical Invention and Innovation and professor of surgery at McMaster University in Hamilton, Ontario, have published studies on the effects of varying intervals of latency on surgeons' perceptions. In a pioneering 2005 work, Anvari concluded surgeons could complete remote robotic surgery with latency times up to 500 milliseconds, although higher times introduced more error and longer procedure time. Madder's recent study concluded that latencies for stenting procedures should be kept to 250 milliseconds or less to avoid perceived lag.

"The tests we've done, both in India and the U.S., have resulted in quite acceptable performance," Teany said. "Every study has had latency of about 50 milliseconds round trip. That being said, that's all prototype work. As we think about commercializing this, the thing we need to study is the robustness and dependability of the commercial infrastructure."

To that end, he said, in many places in the U.S., IT investments brought about by the HITECH legislation of 2009 have improved health system network infrastructure. However, many of the regions most in need of remote robotic procedures are also located in areas with limited broadband capacity; previous-generation wireless technologies such as microwave, which Anvari said was widely deployed in areas of Canada with sparse population, were not suited to the requirements for telesurgery. The influx of 5G wireless, though presently limited to a handful of urban areas in the U.S., may change that equation. For instance, Teany said recent 5G tests Corindus and Madder performed from Waltham to Cambridge, MA. resulted in 10 to 13 milliseconds of latency compared to 50 on fiber.

However, Anvari said, the organizational factors affecting robotic telesurgery, such as regulatory and licensing orthodoxy, also have yet to catch up with the potential. Addressing those will have to go hand-in-hand with ensuring the telecommunications infrastructure is adequate.

"The reason why telesurgery hasn't become a big thing is because a lot of the companies that worked with me were American and at that time the medical/legal system, more than telecom, was too big a hurdle for most of these companies to see how they could get over," Anvari said. "These factors include things like FDA approval and interstate licensing issues. For example, in Canada I received telesurgical licensing for the entire nation, but I couldn't go from Canada to the U.S. So I hope in parallel to all the advances in telecommunications, that we also look at how can telementoring, telesurgery, and telerobotic surgery get the type of licensing and medical and legal support required to make it commonplace."